An ambitious endeavor launched by Children’s Fine Arts Series, the Children’s International Puppet Festival brings professional companies from the U.S, Europe and Asia to SA for a packed week of shows. Encompassing 59 performances by seven troupes, the fest explores everything from mythology and folklore to wildlife and ecology. Portland-based Tears of Joy Theatre’s When Animals Were People, French outfit Le Clan de Songes’ Fragile (pictured) and U.K.-based Mimika Theatre’s Landscapes stand out among many imaginative highlights. $10-$42, 8am-8pm Thu-Sat, 8am-7pm Sun, Tobin Center for the Performing Arts, 100 Auditorium Circle, (210) 223-8624, tobincenter.org. Through May 12. — Bryan Rindfuss

Start with a bit of Phil Spector’s generous girl group sound, then add a dash of The Doors’ wild carnival keys, a touch of The Beatles’ stranger side and a photo of Johnny Rotten’s snarl for good measure. With this righteous recipe, you get the singular sound of LA psychedelic rock outfit Mr. Elevator and the Brain Hotel. Notable for combining elements of jazz with the throwback psych sound and for eschewing guitar in favor of blistering organ leads, Mr. Elevator offers a refreshing take on the So Cal sound. In the live setting the band explores, and pushes outward, the limits of their unique music. Also on the bill: Cosmonauts, Burning Palms, Hip Hatchet and The Oblio's. $5-$7, 9pm Thu, 502 Bar, 502 Embassy Oaks, (210) 257-8125, 502bar.com. — James Courtney 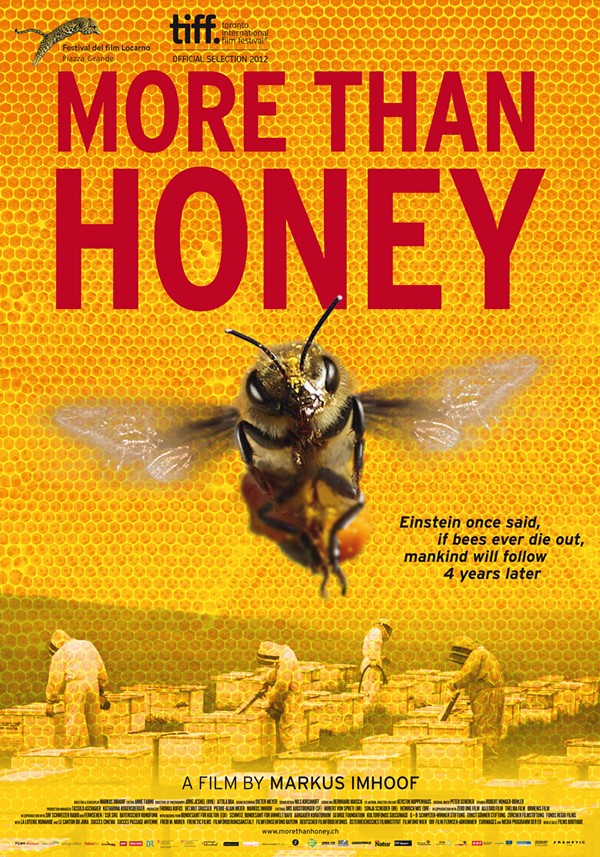 Spend National Public Gardens Day (yes, that’s a thing and has been since 2009) with Swiss filmmaker Marcus Imhoof as he journeys across the world to explore the relationship between man and honeybee and analyzes the global impact of the dwindling bee population. Using high-speed photography and endoscopic lenses, his 2013 documentary More Than Honey transports viewers into the honeybees’ flight path and explains why the species is more than just the supplier of something to sweeten your chamomile tea. San Antonio Botanical Garden screens the doc as part of its outdoor sustainable film series. Free, gates at 6:30pm, film at sunset Fri, San Antonio Botanical Garden, 555 Funston Pl., (210) 207-3250, sabot.org. – Kiko Martínez

Growing in leaps and bounds since its formation in 1965, the Southwest School of Art is now Texas’ only independent art college. To celebrate half a century of educating, inspiring and showcasing artists, SSA is mounting a group show of diverse self-portraits by 50 individuals associated with the school. As if selfies by Alamo City art stars like Alejandro Diaz, Katie Pell and Ken Little weren’t enough of an allure, the commemorative exhibition invites audience participation and opens concurrently with “The Amazing Memorable Thing,” a poppy painting series by artist/educator Christopher Rabb. Free, 6-8pm Fri, Southwest School of Art, 300 Augusta, (210) 224-1848, swschool.org. Through July 5. — BR

Mike WiLL’s ubiquitous producer tag has nothing on the creepy “Forgive Me Father” confessional that stamps many of the emcee’s weirdo songs. Originally known as Father’s Liquor Cabinet, the Atlanta rapper employs his freak-funk comedy all over the 2014 breakout effort Young Hot Ebony. Like Father’s sense of humor, the album owes a good deal to the trailblazing stupidity and constant brilliance of Lil B, with singsong non-sequiturs and song names like “Why Can’t I Cry $$$.” In the video to the 2014 hit “Look At Wrist,” Father makes the connection explicit, doing the Lil B cooking dance in his ATL living room. “Want my wrist so cold pneumonia in my fist,” rhymes Father, jumping over the logical middle ground of his analogy, expecting us to follow suit. With Maxo Kream, Crit Life, KC$B, and Team Next. $20-$25, 8pm Fri, Phantom Room, 2114 N. St. Mary’s, prekindle.com. — Matt Stieb

Emerging young artist J. Eric Simpson’s mixed-media explorations into the trinity of “religion, philosophy and pop culture” have so far taken shape in works combining such unusual suspects as Wheaties boxes, Big Macs, a Jesus statue and a DVD player looping the first season of AMC’s The Walking Dead. A Texas Tech graduate currently pursuing his MFA, Simpson recently attended Land Arts of the American West, a trans-disciplinary field program that expands on the definition of land art via “direct experience with the full range of human interventions in the landscape.” Inspired by notions that affected his boyhood and early adult years, Simpson’s new solo exhibition “Heroes Are Less Heroic” reimagines a world where “the white picket fence of the American Dream no longer represents the security and sanctity it once did; the sacred ritual of Christian communion is compared with the fetishized behavior of contemporary zombie culture; and the expectations of a childhood hero are confronted with a less heroic reality.” Free, 7-10pm Fri, Clamp Light Studios & Gallery, 1704 Blanco Rd., Suite 104, (512) 569-8134, clamplightstudios.blogspot.com. — BR

Few artists in rock music over the last three decades have been more polarizing and transcendent than Courtney Love, widow of late grunge god Kurt Cobain. A double threat, Love has turned out Grammy-nominated singles that helped define the ‘90s and earned a Golden Globe nod for her acting work in Miloš Forman’s biopic The People Vs. Larry Flynt. While Love established herself as a solo artist more than a decade ago with America’s Sweetheart, she’s still known best as frontwoman for Hole, an LA band that reached stardom at the climax of Generation X. Although it started out with an aggressive sound crossing streams of the Riot Grrrl aesthetic with noise-rock tendencies, Hole adapted to the ‘90s and perfected a signature pop-rock sound befitting a new wave of alternative radio. Love has maintained this sound through her solo career while exchanging throaty vocals with exasperating screams expressing the rage and raw emotion of her lyrics. Her output may have become more sporadic over the last decade, but Love’s influence has been more ubiquitous than ever. $25, 8pm, Paper Tiger, 2410 N. St. Mary’s St., papertiger.queueapp.com.
— Erik Casarez

After recently coming in second for Best Burlesque Troupe (for the second year in a row) in our readers’ poll, the Pastie Pops took to their Facebook page — not to rage but to thank fans who voted for them (despite the “cheesy yet awesome campaign pics”). And with that gracious attitude, the Pops file into the Skinema. Featuring performances by 13 artists (including freshly solo “glam bear queen” Foxxy Blue Orchid and decorated Dallasite Blaze, pictured), the movie-themed spectacle takes creative cues from Edward Scissorhands, The Muppets, Sister Act, Moulin Rouge! and many more. $10-$40, 9pm Sat, The Uptown Studio, 700 Fredericksburg Rd., (210) 387-1617, facebook.com/pastiepops. — BR

A Southtown resident since 1992, California transplant Robert Tatum has embedded his whimsical, animal-centric, street-smart aesthetic into all corners of the Alamo City. Although its been showcased in galleries ranging from AnArte to Sala Diaz, Tatum’s instantly recognizable work is possibly more often seen in the restaurants and bars he’s created murals and signage for (The Luxury, Mellow Mushroom, Las Vegas Bar, Chicago Bar, the list goes on). In conjunction with Second Saturday in the South Flores/Lone Star Arts District, the artist, creative director and owner of Tatum Original Choice Goods (inside Brick at Blue Star) unveils his new painting series “Raw Toons” at a reception with music by DJ Sweedish Erotica. Free, 7-10pm Sat, Gravelmouth Gallery, 1906 S. Flores St., tatumoriginals.com. — BR

What the hell can we make of Ariel Pink? He’s a cracked pop-savant, assembling scraps of half-forgotten Billboard hits around pyscho-babble lyrics in inexplicably alluring ways. A troll of the first order, as likely to throw shade at Madonna as to defend the rights of the Westboro Baptist Church; an unabashed creep, who can make a charming request like “Put Your Number In My Phone” into a dirty old man’s come-on. But in spite of — or occasionally because of — these antics, Ariel Pink matters, and it isn’t just a matter of shock value. Let’s start with his music, which is characteristically about as unplaceable as the dude himself. Hyper-Pink fans have long fetishized the small truckload of hometapes the LA-based singer-songwriter produced in the late ’90s and early 2000s. Pieces of these barely decipherable works eventually were assembled Frankenstein-style into his most accessible record — 2010’s Before Today — making a strong case for Pink’s status as a bedroom-pop Brian Wilson. But if Before Today, and its ostensible hit “Round and Round” remain his most recognizable work, it’s last year’s pom pom which feels like his most representative. The 80-minute release stands as a flippant epic, with Pink running through ultraviolent glam-rockers (“Not Enough Violence”), surf rock send-ups (“Nude Beach A-Go-Go”) and oddly earnest bubblegum love letters (“One Summer Night”) in a way that keeps even the most out-there styles locked into his own odd orbit. Click here to read the Current's full story on Ariel Pink.
$15, 7pm Sun, Paper Tiger, 2410 N. St. Mary's St., papertiger.queueapp.com. — J.D. Swerzenski