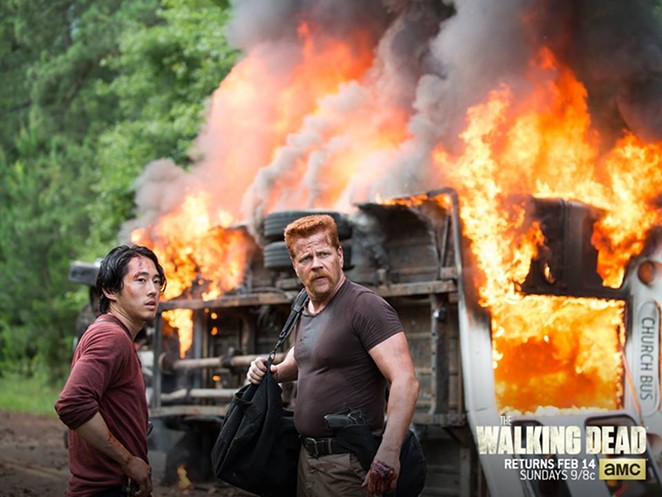 Terror Expo is this weekend at the Henry B. Gonzalez Convention Center with several cast members of AMC's The Walking Dead in attendance. In celebration of their visit to San Antonio and the second half of season six just a few weeks away, we look at some of the best episodes of the show. Be advised, there are plenty of spoilers coming up.

Season 2, Episode 3 "Save the Last One"
It was just a matter of time before Shane would crack. You can just feel it as the second season started, but no one expected an evil move like this. Not only does he make poor Otis a human-sized treat for a herd of zombies by shooting him in the leg, Shane has the gall to lie about it in hopes of being considered a hero. This was the first instance of the series where it was plain to see that the real danger in the zombie apocalypse wasn't the zombies, but rather the people who survived.

Season 2, Episode 7 "Pretty Much Dead Already"
Season 2 of The Walking Dead was filled with filler, to put it bluntly. Thanks to a budget cut by AMC, the production crew had few locations to choose from resulting in several episodes using the same locations again and again with hardly any variance. Then came "Pretty Much Dead Already" where Shane loses it once again and reveals the secret of Hershel's farm. The result is a tense scene where young Sophia, who everyone was searching for this whole season, staggers out of the barn. The last scene left viewers breathless as they stared down the barrel of Rick's gun as he struggles to do what's needed.

Season 3, Episode 12 "Clear"
When a character goes their own way on The Walking Dead, the consensus is that they'll be dead soon enough. That wasn't the case for Morgan. The first survivor Rick met in the zombie apocalypse, Morgan returns in Season 3, but he's definitely not the same. Morgan has clearly snapped after losing his son and created a safehouse riddled with traps. It's this episode when Rick — who was dealing with the loss of his wife and was right on the edge of losing it himself — is able to see what his future will look like if he doesn't come to peace with the death of his wife.

Season 3, Episode 4 "Killer Within"
This episode is part crime drama and part punch-in-the-gut drama. As the survivors settle down in their new prison home, one unknown person decides to ruin the housewarming party by opening the gates to let the zombies in. As a result, both T-Dog and Lori end up dying. T-Dog dies a hero by using his body as a meat shield to stop the zombies, and Lori dies while giving birth to a baby. Then young Carl had to put a bullet in his mother's head, killing any shred of innocence left in him.

Season 4, Episode 14 "The Grove"
It's one thing to see an adult lose their marbles when a zombie outbreak happens. They have years upon years of memories and to wake up realizing everything is now gone, of course someone would snap. But what made a child snap? "The Grove" focuses on two young sisters, Lizzie and Mika. The older of the two, Lizzie, slowly descends into madness as she tries to play with random zombies, feed them mice and ultimately, kills her sister because she believe the zombies want Mika to change. Carol then has to make the panful choice (plenty of those in this series) to kill Lizzie.

Season 6, Episode 3 "Thank You"
After the latest episode of The Walking Dead airs on AMC, the live talk show hosted by comedian Chris Hardwick, Talking Dead, begins and lets viewers unpack what they just saw. In the case of "Thank You," the usually jovial talk show was a somber as a funeral. One of the beloved characters of the series, Glen, was being eaten alive minute prior and no one was in a mood for a smile. When the producers of the show prepare a statement for a death of a character that was more eloquent than the announcement' of John Lennon's death on Monday Night Football, it's safe to say that the producer knew this episode would be almost too much for people. Then a few episode later it was revealed that Glen was still alive and everyone was happy again.

Season 6, Episode 2 "JSS"
Nothing sets the mood for an emotional episode of "The Walking Dead" like the destruction of what was considered to be a safe space. Alexandria was too good to be true. A supposed safe neighborhood would never last and that's exactly what happened when psychotic group of survivor, The Wolfs, come calling. In a surprise attack, the peaceful folks of Alexandria were no match for the savagery of The Wolfs. Luckily, Morgan, Carol and hardened survivors were around to stop the invasion, but this was the sign of the end for Alexandria. Just Survive Somehow indeed.

Season 5, Episode 1 "No Sanctuary"
The end of season four is when the survivors changed from roaming group of everyday people to a squadron of badasses. Deceived by the people of Terminus, instead of cowering to their captors, Rick and the other survivors knew they were not to be messed with. On that same note, the episode has flashbacks of the Terminus people who decided they would no longer be cattle for the butcher. The result is an episode filled with death and destruction along with a tearful reunion to further confuse your emotions.

Season 1, Episode 1 "Days Gone By"
The pilot episode of The Walking Dead did a great job on setting up the series. It starts off with the introduction of Rick Grimes and his first instance of a common practice in the series: shooting a zombie kid in the head. Then the show had a glimpse of normalcy with the event that put Rick in a hospital prior to the zombie outbreak. As Rick slowly understands the world changed while he was out, he meets another survivor, Morgan, who has a tinge of craziness in him, something Rick will see again in the future. There's also a look at Shane, who unapologetically romanced Rick's wife, Lori, and became a father figure to Rick's son, Carl. The episode ends with Rick surrounded by zombies, something viewers would see again and again throughout the series.

Season 4, Episode 8 "Too Far Gone"
A great villain is someone who does the most heinous acts, but is still likable. That is The Governor. There's a charm about him, which disguises his viciousness, and in "Too Far Gone," all that's left is a vicious psycho. Hellbent on destroying Rick and his survivors, The Governor gathers his forces to storm the prison and proceeds to deal out the most savage killing in the series so far onto the kindest character on the show, Hershel. Although his death was satisfying, The Governor left an impact on viewers making him one of the best villains ever.