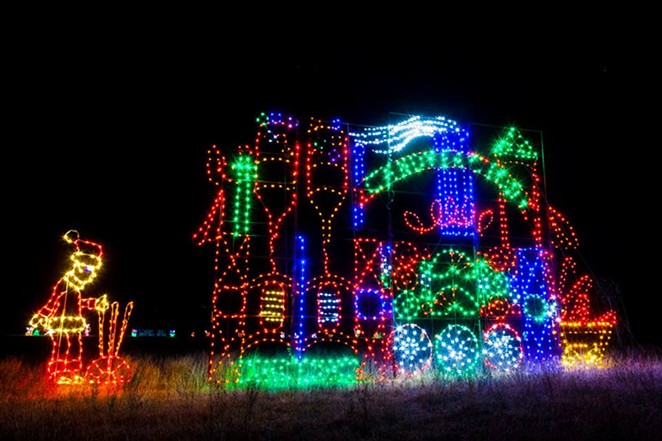 Lighting of the Lights in Helotes

Helotes will have its annual tree lighting ceremony at city hall. There will be musical accompaniment by the elementary school choir and the Helotes Area Community Band. Mr. and Mrs. Claus are expected to make an appearance. Free, Friday, December 4, 6pm, 12951 Bandera Road, facebook.com

The citizens of Windcrest will be participating in a tradition that has been held for decades, lighting up their houses in competition over who has the best decorations and lights. Residents of Windcrest and the surrounding area are invited to drive through the streets and admire the sights. Free, December 12, 6pm, 8609 Midcrown, (210) 655-0022, windcrest-tx.gov.

The Christmas lights are on full display at UIW, having kicked off on November 21. While the opening festivities are long over, you can still take self-guided tours every night until January 6. Free, 4301 Broadway, (210) 829-6000, uiw.edu

Light the Night Christmas Parade
The Fredericksburg Chamber of Commerce is hosting the annual Light the Night Parade that has been a tradition for over 20 years. It's free to attend, but you can reserve a spot to get the best view of the parade for $15. Over 100 floats are expected to be in the parade. Free, December 4, 6:30pm parade, activities 3-10pm, 126 W. Main, (830) 997-5000, lightthenightchristmasparade.com

Christmas in the Park
Another Boerne event, this time at the Roundup Beer Garden. The event kicks off with a toy donation drive followed by caroling and a lighting ceremony in the park. Free, December 18, 6pm, 531 FM 3351 N, (830) 428-3231, facebook.com.

Ford Fiesta De Las Luminarias
Keeping with a tradition that is hundreds of years old, the San Antonio River Walk will be lined with luminarias, sand-filled bags adorned with candles to light the way of the Holy Family. Free, December 4-20, dusk every day, San Antonio River Walk, (210) 227-4262, visitsanantonio.com.

Holiday in the Park
Six Flags Fiesta Texas has started their park transformation into a winter wonderland with Santa Claus, caroling, and their signature nativity show, "The Majesty of Christmas." $50, 2pm, Six Flags Fiesta Texas, 17000 I-10 W, (210) 697-5050, sixflags.com.