15 Interior Mexican Bites We Can't Get Enough Of In SA 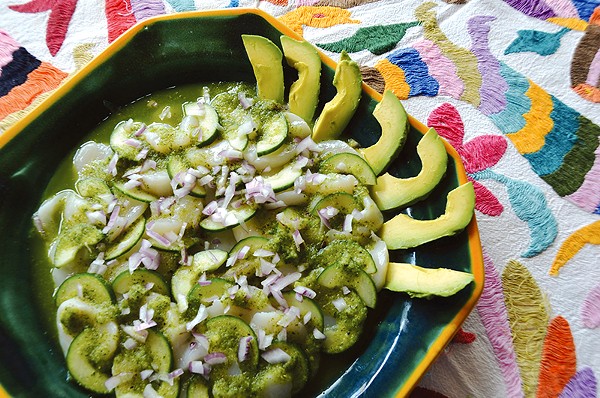 As a nod to our neighbors south of the border (and in SA) celebrating Mexico's 205th year of independence from Spain today, we're giving props to bocadillos and bocaditos we've grown to love.

Stone Oak and Sonterra's continued influx of Mexican nationals — more than 150,000 have moved to SA since 2013, according to the Migration Policy Institute, a nonpartisan think tank — is evident by the surge of more taquerias, cevicherias and then some. Though we could turn our noses at the varied level of authenticity found at any of these restaurants, Dr. Ellen Riojas Clark, Professor Emiritus for UTSA's Division of Bicultural Bilingual Studies laughs at the thought. 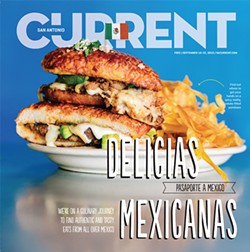 "As second-, third- or fourth-generation immigrants, our experiences are just as authentic to us. Can we replicate dishes our mothers or grandmothers made? Yes, to a certain extent, but it's an interpretation rather than a carbon copy," Clark told the San Antonio Current.

"Borders are fluid. I consider them more like frontiers we can take from one to another. [Restaurants] that allow us to experience, that educate, are marvelous," she continued.

Keeping her wise words in mind, we've pinpointed eateries that tug at our stomachs and heart strings with sabores not often found in Tex-Mex joints (though we'll never turn down a puffy taco). We're traipsing through Mexico one state at a time, one pedazo at a time. Come with.

The origin of this dish is murky or owed to culinarian nuns, but make this your go-to for this week's festivities. The iconic dish wears Mexican colors with a vibrant poblano chile, creamy walnut (occasionally almond) sauce and juicy pomegranate seeds. Consumed between August and October, the dish is packed with seasonal fruits (Silvia Alcaraz of Cocina Heritage uses Mexican peaches and a manzana pachona). You can take all of it in during Cocina Heritage's next Long Table dinner at Dorol Distilling Company on Thursday, September 17 at 6:30 p.m. Or visit Picante Grill or Aldaco's Mexican Cuisine (multiple locations).

An original Mexican treat, they are most certainly not. But even as a staple for most Mexican restaurants worth their salt, finding the perfect churro can be exhausting. Head to Palenque Grill for short and crunchy iterations with a warmed cajeta for dipping, but if you're looking for the longest ones, try Panaderia La Mejico found outside El Bucanero's location at 16505 Blanco Rd., 210-408-9297; usually from noon to 10 p.m.). The fire engine red truck opened by Bernardo Vasquez Bulnes in early 2015 offers empanadas de cajeta, pan dulce, buñuelos and tres leches cake, but he's gained a following for his fresh, warm, chewy and crunchy churros. Served with strawberry jam, cajeta, nutella or chocolate dipping sauce, the desserts are must-haves for El Buc's out of town guests.

Though by no means new to the landscape, these enchilada variations are worth ditching the cheddar-filled Tex-Mex versions we're accustomed to. Take a soft corn tortilla, fry it and layer on a thin tomato sauce. Diana Kennedy's Oaxaca Al Gusto opted for onion, garlic, chiles de agua or jalapeños, a little less than 2 pounds of tomatoes and epazote (or wormseed), but you'll find a slightly smokier rendition using chile guajillo at El Mirador (722 S. St. Mary's St., 210-225-9444), which also tops the pair of rolled tacos with a light escabeche and plenty of queso fresco. Find similar iterations at Picante Grill (3810 Broadway St., 210-822-3797) and Acenar (146 E. Houston St., 210-222-2362).

While on the same vein as tlacoyos, this particular nibble is part tostada (or chalupa for some), part tortilla. Find them loaded with refried beans, queso fresco, tomato sauce, eggs, carne asada and grilled chicken at Metro Taco Stop. Or try the trusty Chilaquil and Erick's Mexican Restaurant (next to the truck) where owner Erick Onosre introduced them to the northeast side in 2011. Or Cascabel Mexican Patio (1000 S. St. Mary's St., 210-212-6456) with black beans, al pastor, bistec, cochinita pibil, puerco a la calabaza or pollo a la plancha.

One man's plant disease is another's delicacy. Though NPR blew up huitlacoche a few weeks ago, the corn fungus has been making appearances on San Anto menus for years. The funky, gunky stuff might look unappetizing when found atop corn husks, but it takes on an earthy, shroom flavor when cooked. Cocina Heritage whips up tacos of the stuff (usually stewed with tomato and onion) during weekends at the Castle Hills Farm To Market (2211 NW Military, 210-259-8359) and the Back Yard Market (5300 McCullough Ave., 210-324-4683).

We're being honest here: machitos may be an acquired taste — or require a lot of lashing with a serious salsa. We suggest you start your indoctrination at Los Cabriteros (17660 Henderson Pass, 210-468-2904) where they know how to stuff goat internal organs (we're not copping to which they are) into intestine and grill them. Yum. (No, really — though do use the salsas.) Other sources are the ever-dependable El Chilaquil and La Bandera Molino on N. Zarzamora (2619 N. Zarzamora St., 210-434-0631) —but, oddly, not El Machito. At least not on a regular basis.

In his long-gone location on the near West Side, Mario was the master of mollejas a la plancha. The term is a little slippery (it usually refers to either thymus or pancreas of beef) and preparation involves a fair amount of work before the meat meets the metal, but if you find 'em, try' em: the texture is velvety, the flavor delicate enough to respond to chingos de salsas. Look to Los Cabriteros, Piedras Negras de La Noche (1322 S. Laredo St., 210-227-7779) as their Monday special, Toro Taco Bar (114 Brooklyn) sometimes, Tink-A-Tako (multiple locations) always, and now even at The Old Main Assoc. (2512 N. Main Ave., 210-562-3440) Jeret Peña's latest cocktailery given a bar-snack spin.

Think "pan" and you're almost there: pambazo is both a sandwich and the name of the large, sturdy roll — bigger than a bolillo and less crusty — it is made with. Sliced in half horizontally and sometimes relieved of some of its interior, the roll is filled with, say, chorizo, refritos, Oaxaca cheese, potato and salsa, dipped in a simple chili sauce, and (usually) fried on both sides. At Flair Mexican Street Food (6462 N. New Braunfels Ave., 210-977-0193), the sandwich is conventionally stuffed, then "brushed heavily on the outside with guajillo adobo sauce." Also check out alternative versions at El Chilaquil and Sabrosas de Guanajuato (6825 San Pedro Ave., 210-785-9211).

Tinga is a Pueblan dish usually made from shredded chicken breast or thighs cooked in tomatoes and tomatillos with chipotle chiles. It's versatile enough to be served in tacos or empanadas or, as at Mezcaleria Mixtli (5313 McCullough Ave., 856-630-5142), where they further enhance it with cinnamon and mint, simply in a bowl. At Taps Y Tapas (1012 N. Flores St., 210-277-7174) the wrapper of choice is a wonton that gets additional embellishment in the form of crema, queso fresco and chile de árbol sauce. Both Rosario's (multiple locations) and The Fruteria (1401 S. Flores St., 210-251-3104) put their own spin on it as well.

The world beyond breakfast tacos is vast and varied, so you're forgiven if you don't know squat about tlacoyos. Here's the skinny: they're fresh masa flattened into an elongated boat shape that has often been folded over a filling such as ricotta or bean paste before hitting the griddle. At El Chilaquil, black bean is the stuffing for a super-sized tlacoyo topped with nopalitos, queso blanco, cilantro and white onion. Look for variations on this theme at La Gloria (100 E. Grayson St., 210-267-9040) and Cascabel Mexican Patio (1000 S. St. Mary's St., 210-212-6456).

Torta ahogada translates as "drowned" sandwich and in its classic Tapatian form, it starts with a sturdy birote (think crusty bolillo) that is stuffed with carnitas and then doused in a tomato sauce with Mexican oregano. Konan at El Chivito (204 Crossroads Blvd., 210-369-9638) will be happy to discuss at length its proper preparation with additional chile de arbol sauce and onions and cabbage in salt, lime and vinegar. A similar version is served up at Ro-Ho Pork & Bread (623 Urban Loop, 210-800-3487). La Gloria has a rendition. And Malinalli Sweet Swirls (2211 NW Military Hwy., 210-209-3463) places the cut halves ends up in a pool of sauce, allowing eaters to keep their digits decorously dry.

Come Thursdays, the star of the show at Taquitos West Ave. (2818 West Ave., 210-525-9888) is the 200-pound glistening trompo for al pastor tacos. Thinly sliced pork is stacked oodles of times over, creating this hunky beast that would make most vegetarians wince. The atmosphere becomes focused with the task at hand. Order your taquitos from your cook, con todo (grilled onions, fresh onions, cilantro and sliced radishes) and make your way to one of the tiny plastic and metal benches that line this Sonic-like eatery. Find a similar experience at Beto's Alt-Mex (8142 Broadway St., 210-930-9393), which will serve buy-one, get-one free for tacos al pastor through September 23, Marioli (18730 Tuscany Stone, 210-496-1111) which turns into a taqueria come 6 p.m. and Erick's Tacos (12715 Nacogdoches Rd., 210-590-0994) and get an elote while you're at it.

Yields 4 to 6 as a snack
Ingredients

Arrange scallops in an even layer on a large plate and sprinkle all over with salt. Cover with plastic and refrigerate for at least 1 hour (max 2 hours).

Meanwhile, blend jalapeños with water in a blender or with an immersion blender until thoroughly blended. Add diced cucumber and blend until pureed. Add lime juice and cilantro and blend until cilantro is finely chopped. Season with salt and pepper. In a mixing bowl, toss scallops with jalapeño-lime marinade, onion and remaining cucumber half-moons. Season once more with salt and pepper and serve right away with tostadas and avocado.
Recipe via Serious Eats

Roast the tomatoes on a dry comal or griddle, turning with tongs until charred on all sides. Peel and set aside. Peel and cut one of the onions in half crosswise; char the cut side on the comal. Char the garlic cloves – unpeeled – on the comal, then peel. Lightly toast the chiles on the comal. Place the tomatoes, onion, garlic, chiles, peppercorn and allspice in a blender with just enough water to allow movement of the blades and puree.

In a medium saucepan, heat the oil or lard, add the puree, lower heat to medium-low and cook for about 10 minutes, making a thick sauce. Add salt to taste.

Soft-fry the tortillas in just enough oil to make them soft, making sure they do not become crisp. Drain on paper towels. Fold each tortilla in half, then in half again, and dip into tomato sauce.