20 Celebrities Who Went to High School in San Antonio

By San Antonio Current Staff
Share on Facebook
Tweet
Submit to Reddit
Email
It's common knowledge that San Antonians take a lot of pride in where they attended high school. So, we rounded up 20 famous people who went to high school locally, whether they were born and raised in the Alamo City or just ended up here.
OF 20
PREV NEXT 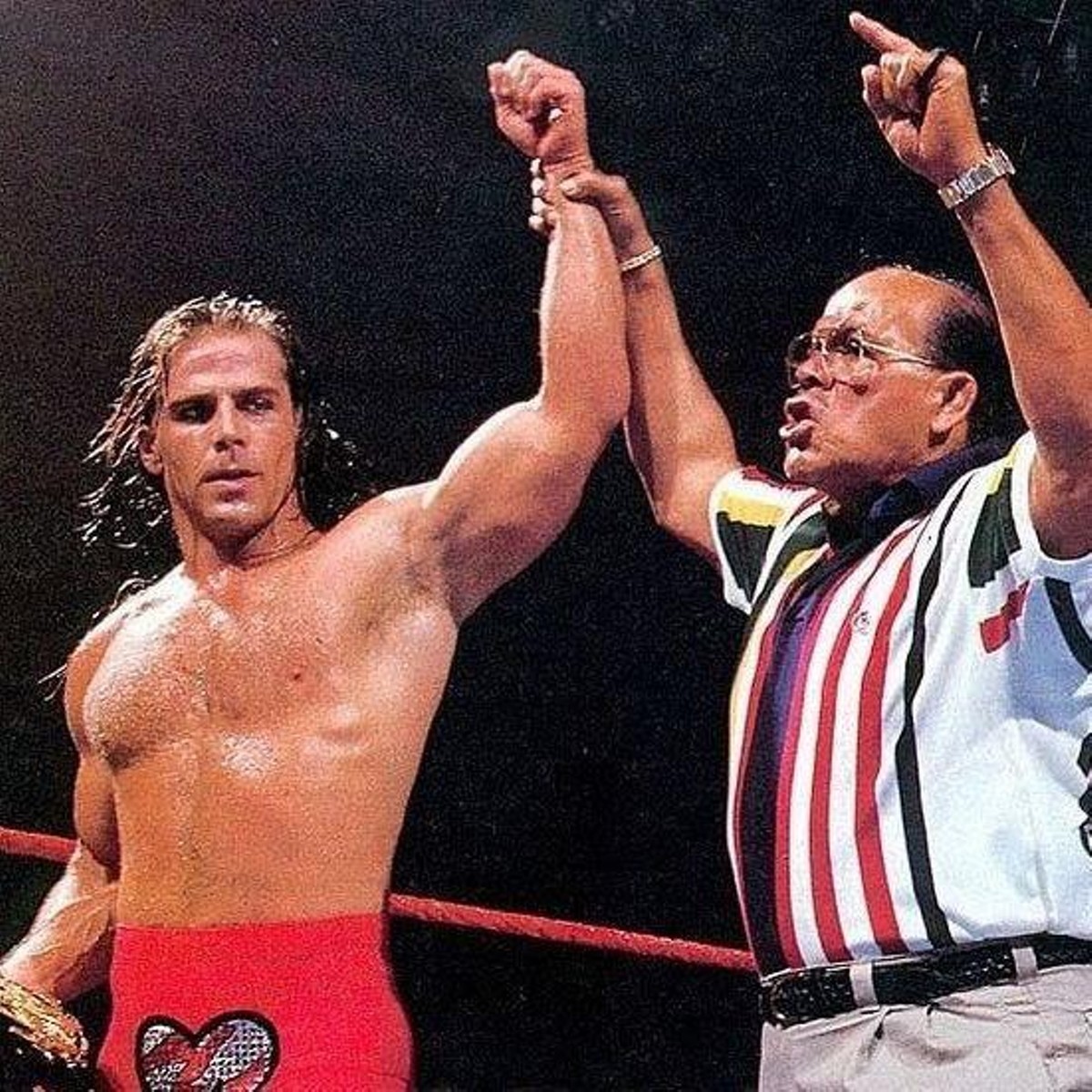 Shawn Michaels
Though he was born in Arizona, Shawn Michaels’ ties to SA make him the prodigal son of the Alamo City. No, not really, but we do rep him since he attended Randolph HS on base. He would later be trained by local, yet acclaimed boxing legend José Lothario.
Photo courtesy of WWE
Jared Padelecki
A favorite for multiple fandoms thanks to his roles on Gilmore Girls and Supernatural, Jared Padelecki is a proud SA native. He was born and raised in the Alamo City, and graduated from Madison HS before flocking to Los Angeles to begin his acting career. Obviously, things turned out well for him.
Photo courtesy of the CW via Instagram / cw_supernatural
Jonathan Joss
Jonathan Joss is pretty damn San Anto, born here in 1965 as Jonathan Gonzales. He attended McCollum HS and later voiced Red Corn on King of the Hill and portrayed Chief Ken Hotate on Parks and Recreation.
Photo courtesy of NBC via Netflix / Parks and Recreation
Chris Perez
Selena may have repped Corpus Christi, but her hubby is totally a San Antonio guy. He was born in SA in 1969 and even went to Jefferson HS.
Photo via Instagram / chrispereznow
Jesse Borrego
Before catching his break in Fame and starring in SA favorite Blood In, Blood Out, Jesse Borrego grew up on the South Side. He graduated from Harlandale HS in 1980.
Photo courtesy of Jesse Borrego
Shaquille O'Neal
Though there was a time that San Antonians hated Shaq (during his Lakers years), he will forever have ties to the Alamo City. He was an army brat (his stepdad was a sergeant) and attended Robert G. Cole HS. While there, Shaq led the team to a 68-1 record over two years, securing a state championship his senior year. And the rest, they say, is history.
Photo via Instagram / shaq
Pendleton Ward
Animator, writer and voice actor Pendleton Ward, best known as the creative force behind Adventure Time, was born in the Alamo City in 1982. Though he now resides in Los Angeles, the cartoon wiz is a graduate of the now-LEE High School.
Photo via Instagram / weeb.on.crack
Peter Weller
RoboCop went to school in SA?! Yes, it’s true. Actor Peter Weller, a Wisconsin native, landed in SA thanks to his dad’s military career and actually graduated from Alamo Heights HS.
Photo via Instagram / real_peter_weller
Henry Thomas
After breaking into Hollywood in E.T. The Extra-Terrestrial and starring in a few more films in his youth, actor Henry Thomas returned to his native SA. He even graduated from East Central HS before continuing his acting career.
Photo courtesy of Rare Bird Books
Shea Serrano
New York Times best-selling author, journalist and former teacher proudly reps San Antonio – more specifically the South Side. Widely known for his addicting Twitter personality, Serrano graduated from Southwest HS.
Photo via Instagram / laramiserranophoto
Skip ad in
Christopher Cross
Singer-songwriter Christopher Cross was born in SA in 1951 and found fame with his debut album in 1979. But first – he graduated from Alamo Heights HS.
Photo via Instagram / ohjayy.parker
Robert Rodriguez
Badass director (Sin City, Once Upon a Time in Mexico, Machete, Spy Kids, From Dusk Till Dawn, El Mariachi) Robert Rodriguez can be considered SA’s pride and joy, or at least for movie junkies. He was born here in 1968 and graduated from St. Anthony HS – though he definitely reps Austin nowadays.
Photo via Instagram / rodriguez
James Roday
Everyone’s favorite psychic (but not really a psychic) is a San Antonio native, born here in 1976. The former Psych actor graduated from Taft HS! And in case you didn’t know, his name is actually James Rodriguez.
Photo via Instagram / jamesroday
John Quiñones
Juan Manuel “John” Quiñones was born in the 2-1-0 in 1952 and graduated from Brackenridge HS. With the help of Upward Bound, he attended St. Mary’s University and is now the longtime host of What Would You Do?
Photo via Instagram / johnquinones
Austin Mahone
Though he didn’t graduate from Lady Bird Johnson HS, the pop singer did attend the SA school for his freshman year. He ended up being homeschooled since his career began taking off around that time.
Photo via Instagram / austinmahone
Patricia Vonne
Did you know that Patricia Vonne is Robert Rodriguez’s sister? Well, now you know. She was born in SA in 1969 and, like her brother, attended St. Anthony HS. Today, she’s a singer and actress, starring in some of her brother’s films.
Photo by Monica Cox via Instagram / patriciavonne
Ricardo Chavira
Before starring in Desperate Housewives and Jane the Virgin, Ricardo Chavira spent his childhood and early adulthood in San Antonio. The Alamo City native graduated from the then-Lee High School. You know, LEE today.
Photo via Instagram / ricardoachavira
Bruce McGill
This guy-that’s-in-everything-but-you-probably-don’t-know-his-name is a product of San Antonio. Before starring in a long list of TV shows and movies – from Animal House and Rizzoli & Isles to MacGyver, McGill graduated from MacArthur HS.
Photo courtesy of USA via Amazon Prime / Suits
Scottie Jefferies
Texas boy Scottie Jefferies Jr. was born in Corpus Christi, but moved to SA with his family in 1981. Just five years later, he graduated from Roosevelt HS, where he was coached by football legend John Ferrara. During his junior year, he scored the winning touchdown that knocked off Judson from its No. 1 spot. After injuries that led to the end of his football career, Jefferies went on to star in Friday Night Lights, Machete and other titles.
Photo by Sanjay Patel via IMDB
Nicholas Gonzalez
Long before Hollywood, Nicholas Gonzalez attended Central Catholic HS, where he won two state championships as a cross-country and track runner. After graduating from Stanford University with a degree in English, Gonzalez was convinced to follow his passion for acting. He rightfully earned his acting career today, which includes credits in The Good Doctor and Pretty Little Liars.
Photo courtesy of ABC
Skip ad in
More slideshows

20 free arts, music and outdoor activities to do in San Antonio this summer
San Antonio Current Staff20 images
1/20
Shawn Michaels
Though he was born in Arizona, Shawn Michaels’ ties to SA make him the prodigal son of the Alamo City. No, not really, but we do rep him since he attended Randolph HS on base. He would later be trained by local, yet acclaimed boxing legend José Lothario.
Photo courtesy of WWE
Play Slideshow