How the hell is it almost the middle of January already? Wasn’t it just Halloween? Wasn’t it just 2018? We must be having fun ‘cause time sure is flying. To keep up the pace, we’ve compiled a list of some stellar live shows you definitely should check out when they come to town. Sure, there's a ton of local acts here that you should peep (we announce their shows too), the folks on this list are bigger acts are worth saving the date for, so cop those tickets:

Juxtapose a very small group of entertainers like Beyoncé, Justin Timberlake is one of the few pop entertainers to have gained stardom in the ‘90s, survived the awkward aughts, and continue to stay in the public eye until today. With a new album Man of the Woods to add to his his rather unique R&B/pop/singer-songwriter catalog, Justin Timberlake has proven to be an icon in the annals of musical tenacity. $90-$250, 7:30pm, AT&T Center, One AT&T Center PKWY, attcenter.com.

When Thursday first burst on the scene in the late ’90s, it’s arguable that critics believed that their special blend of first wave emo and post-hardcore might not stand the test of time. As the band grew into the early aughts and released two powerhouse albums, 2001’s Full Collapse and 2003’s War all the Time, the level of musicianship and caliber of their passionate live shows set them apart as leaders of a sound that many in the genre would attempt to duplicate. On tour playing songs from the aforementioned War all the Time and Full Collapse, this is pretty much the emo event of the year. $50, 8pm, Paper Tiger, 2410 N. St. Mary’s St., papertigersatx.com.

Sort of like how punk rock is to mainstream rock ‘n’ roll or “active rock” or “radio rock,” underground hip-hop has always been overshadowed by its mainstream older sister. Folks like underground rap pioneers Atmosphere aren't exactly worried about that though. They, along with fellow kinfolk Aesop Rock, Blueprint and Sage Francis, have been able to build an enormous grassroots following since the early ’90s without being censored, directed or molded by giant corporate machines. $25-$35, 9pm, Aztec Theatre, 104 N. St. Mary’s St., theaztectheatre.com.

Bridging the gap between late aughts cloud rap and early '90s gangsta rap, A$AP Rocky burst onto the scene with his charming blend of triplet syllabic patterns over spacey, droney psychedelic beats – usually produced by Clams Casino and well-known DJ/producer Danger Mouse. It’s safe to say that Rocky stands out as a leader in a sort of awkward era when hip-hop is rediscovering itself and, well, taking a lot of mushrooms in the process. $39.50-$248, 8pm, Freeman Coliseum, 3201 E Houston St., attcenter.com.

Led by Emily Haines, Metric, for like 5 years straight, was that band at every single festival, sort of like how St. Vincent and Solange are now. But it’s not like the band is some bubble gum pop trash force fed to us by like [insert giant monster record label owned by Halliburton], their charming amalgamation of indie and pop rock contributed to their overall success in indie rock. And yes, their music continues to rock. $40-$76, 8pm, Aztec Theatre, 104 N. St. Mary’s St., theaztectheatre.com.

We don’t exactly throw around the term “hometown heroes” very often, but there’s really not a better term for active rock dudes Nothing More. From securing three Grammy nominations back in 2017 and their overall dedication to pursuing music (the dudes have been touring for like 12 years straight), you can’t deny their perseverance. And even if you don’t dig their genre, their last two albums arguably have been some of the most solid rock albums to come out of San Antonio in a minute, let alone the country. $26-$51, 6:30pm, Aztec Theatre, 104 N. St. Mary’s St., theaztectheatre.com.

Unicycling the tightrope between indie rock, alternative rock and first wave emo, Death Cab for Cutie owned the early 2000s. You couldn’t fold through a Case Logic CD case without finding 2003’s Transatlanticism or 2005’s Plans next to bands like Thursday or the Mountain Goats and Sufjan Stevens. Even though they fall into the category of alternative rock, frontman Ben Gibbard managed to speak to us through lyrics that an entire generation seemed to relate to. $39.50-$59.50, Aztec Theatre, 104 N. St. Mary’s St., theaztectheatre.com.

Love ‘em or hate ‘em, Cradle of Filth’s longevity in the metal game is tried and true. And while some elitist metalheads sort of hate how popular they’ve become because their friend’s shitty grindcore band hasn’t been discovered yet, Cradle of Filth’s fanbase is enormous. Honestly, their mix of goth rock and black metal is charming to say the least. Also, their latest release Cryptoriana – The Seductiveness of Decay is by far their best album in years and most likely will have songs played from the album on this next tour. $32-$38, 7pm, Aztec Theatre, 104 N. St. Mary’s St., theaztectheatre.com.

Rising to fame with her Season 4 win of American Idol, Carrie Underwood has pretty much been an unstoppable force in country pop. With every release of music, it seems like the world got to know more and more of her personality. Take “Before He Cheats,” for instance. “I took a Louisville Slugger to all headlights,” like damn, girl, that’s pretty dope and unexpected from the sweet country girl persona from American Idol. On her latest album 2018’s Cry Pretty, Underwood lets her sad girl out with tracks like “Backsliding,” “Drinking Alone,” and “The Song We Used to Make Love to,” showing yet another side of personality to an audience that continues to fall in love with her. $44-$94, 7pm, AT&T Center, One AT&T Center Pkwy, attcenter.com. 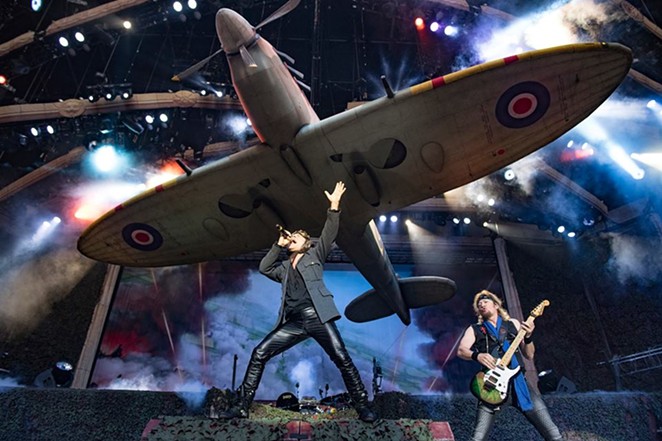 What can be said about Iron Maiden that we don’t already know? The iconic metal gods are legendary contributors to the genre of metal with thirty-eight albums, including sixteen studio albums, twelve live albums, four EPs, and seven compilations. With numerous accolades and millions of fans that have continued to support them since forming in east London in 1975, these dudes are living legends that continue to shred the test of time. $49-$125, 7:30pm, AT&T Center, One AT&T Center Pkwy, attcenter.com.