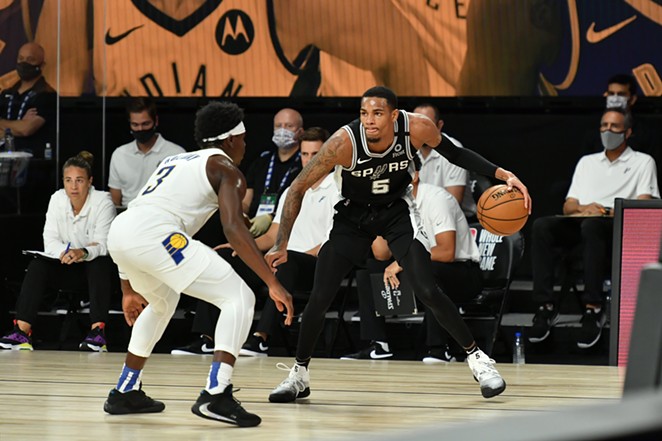 The San Antonio Spurs went a respectable 5-3 during the NBA's final eight Seeding Games, but it wasn't enough to put the Sliver and Black into the playoffs for a record 23rd straight season.

Instead, the Spurs, who finished the season 32-39, were bounced from the post season late Thursday afternoon even before they took the court to play the Utah Jazz during an early evening matchup — a game the Spurs lost 118-112.

After the Memphis Grizzles and Phoenix Suns dismantled their opponents on Thursday, the Spurs found themselves with no mathematical way into the playoffs.

The math, in fact, was incredibly tight. The Spurs ultimately missed the chance to get a playoff spot by one single game, or .015 percentage points. The Portland Trailblazers, who also won their game last night, ended their season at the No. 8 spot. The Memphis Grizzlies are No. 9. Both teams will now play an "In-Play" matchup to decide who ultimately lands the 8th and final playoff spot in the Western Conference.

The Spurs haven’t missed the playoffs since the 1996-97 season — Gregg Popovich’s first year as the team’s head coach.

They now go into the off-season with an array of questions left to be answered: Will veteran all-star DeMar DeRozan, whose has a player option in his contract, still be on the Spurs’ roster next season? Will the Spurs lock up potential star Derrick White? Plus, the question of Popovich’s imminent retirement always lingers.

Finally, is there anything Spurs fans can do to ensure Kawhi Leonard doesn’t win another championship this year? #stillsaltyAF

Hopefully, by the start of next season, the league (and the world) will be out of the COVID-19 bubble and we’ll be on our way back to some kind of normalcy. And if you are a Spurs fan, you know that normalcy always includes the Spurs making the playoffs.