A movie as well written and acted as 20th Century Women must be seen. It must be seen by teenage boys who don’t know how to act around girls. By teenage girls who allow peer pressure to dictate their actions. By middle-aged men and women who are lost souls in search of themselves, and by parents who are doing their best in a world that’s constantly changing.

It also must be seen by anyone who enjoys engaging dramas. Writer/director Mike Mills, whose first film, Beginners (2010), was based on his relationship with his father, this time tells his mother’s story. It’s 1979, and 15-year-old Jamie (Lucas Jade Zumann) is growing up without a father in Santa Barbara, California. His mother Dorothea (Annette Bening, great as usual) is liberal and loving, though ineffectual in certain regards. For a time, she hopes her tenant/handyman William (Billy Crudup) can be a positive influence on Jamie, but soon realizes they have little in common. So to help Jamie become a man, Dorothea enlists her tenant Abbie (Greta Gerwig), a 25-year-old cancer patient who’s into punk rock, and teenage neighbor Julie (Elle Fanning), with whom Jamie is madly in love even though he doesn’t know what real love is yet. 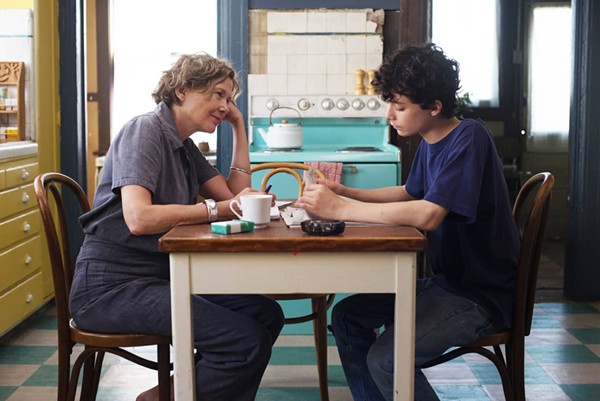 All three women have a profound effect on Jamie, each in vastly different ways. Dorothea had Jamie when she was 40, and now at 55 openly admits to not understanding his generation. She also treats him like the man of the house. In one scene, she asks Jamie to be home in case Abbie needs anything after seeing her oncologist. He asks what to do if there’s bad news. She tells him whatever it is, he can handle it, and points out that men always try to fix things for women when all they need to do is just be there. “I’m not a man, I’m just me,” he says, clearly uncomfortable with what his mother is asking of him and the association she’s giving him with manhood, which he knows he isn’t ready for. “Well, yes and no,” she responds with a sly smile, and we know she’s right — he’s too young and immature for full responsibility, but he needs to learn these things to become the man he’s capable of being.

Abbie’s influence is more cultural: She introduces him to punk rock music, teaches him how to talk to women and empower himself, and gives him feminist textbooks to read. Julie teaches him about heartache and yearning; she’s a lost soul who values his friendship and their closeness, but refuses to have sex with him. Live and learn, young man.

20th Century Women is also about the zeitgeist of the era, including cultural artifacts, values and generational conflicts consistent with the late ’70s/early ’80s. When these artifacts combine with Roger Neill’s lively musical score, the frequent use of fast motion, garish costumes and a production design that feels old even for the ’70s, we get the full scope of what’s molding Jamie into who he will become. Furthermore, it’s in these details that the film feels lived in, like an old photo that brings up fine memories of a time gone by. Conveying this essence is extraordinarily difficult, but Mike Mills has succeeded in a wonderfully endearing way.