3 New Books Illuminate the Intersection of Art, Craft and Activism

Betsy Greer, Leanne Prain and Kim Piper Werker are all makers—or crafters, or artists, or whatever label you want to use to identify the process of making a thing where before there was no thing. All three have books out now (-ish; Prain’s publication date has been pushed forward to Oct 14) that ask the same questions, though each approaches from a slightly different angle: What is the difference between craft and art? And can art change the world?

The first time I really experienced a successful mashup of fine art conceptualism, traditionally female handicraft and political activism, was in the work of Los Angeles artist Lisa Anne Auerbach. Her sweaters, exhibited at galleries internationally, have witty slogans on Iraq, voting, reproductive rights and other social issues knitted into their traditional Scandinavian patterns—each one is like a cross between a ski sweater and an anarchist zine. It was an epiphanic moment when I got the message—not just the overt political one, but the deeper one that said “women’s work” could be art too, and it could even be political.

But of course, it shouldn’t have been. We ’80s kids grew up with the mother of all activist craft: the AIDS Memorial Quilt, a stitched elegy to thousands of AIDS casualties that channeled the grief and justified rage of those left behind into a massive blanket, a comforter that could never truly comfort but at least bears witness. (The quilt, which the NAMES Project calls “the largest ongoing piece of community folk art in the world,” now weighs 54 tons and honors more than 94,000 people.)

“Systematically underrepresented in art history, textiles often carry the stories of those whom society overlooks: women, children, slaves, immigrants, Aboriginal peoples, housewives, stay-at-home fathers, the ill, the disappeared, the displaced and the grieving.” Working from the premise that traditional fabric crafts were and still are used to commemorate or communicate personal histories, Leanne Prain intersperses interviews with artists who work with textiles—sewing, embroidering, knitting their art—with prompts for readers to create their own stitched or woven works. This book is more oriented to an exploration of individual technique and theory than to political discourse, though inevitably it creeps in—Diane Bush’s ImBLEACHment performances and Sarah Corbett’s “Resistance Masks” are two notable examples.

Craftivism: The Art of Craft and Activism

In 2002, Betsy Greer wrote on her blog that “the creation of things by hand leads to a better understanding of democracy, because it reminds us that we have power.” Conversely to Strange Material, one might expect Craftivism to focus solely on yarn bombing, giant protest puppets and stitched picket signs, and that overtly political element is present—e.g., Craft Cartel’s “Cunt Fling-ups,” fabric female genitalia flung over power lines: “Some say gangs fling shoes this way to mark their territory. We do it to reclaim the streets for feminists and the word as a descriptor of things deep, warm and delightful.” But the artists Greer speaks to are not simply crafting strident statements— there’s a sense of humor along with a genuine aesthetic inquiry in their work.

Make It Mighty Ugly: Exercises and Advice for Getting Creative Even When It Ain’t Pretty 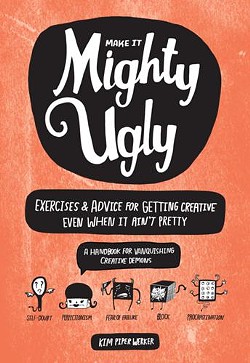 Less fine-art focused than Strange Material, more inward-looking than Craftivism, Kim Werker’s Make It Mighty Ugly is the most directly engaging of the three books. “Make it ugly” is a mantra of sorts that Werker espouses as a way of living, a personal manifesto with applications beyond art. (You can change the world or you can just change your own world.) While the exercises and prompts can verge on self-helpy at moments, it is up to the reader whether to apply Werker’s technique to one’s art practice, one’s crafting hobby or one’s entire life. Illustrations by Kate Bingaman-Burt and brief interviews with working artists throughout make it an enjoyable read, even if it doesn’t move you to action.