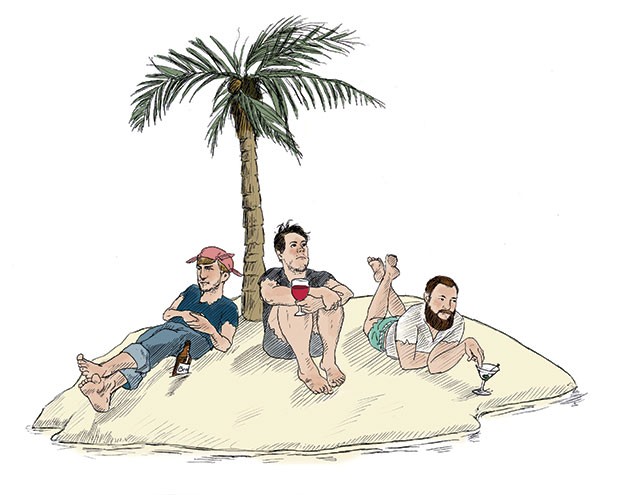 We’ve all run a dozen or more desert island scenarios through our minds. What book would we want to take with us? Which celebrity would we want to make out with? What snacks could we not live without? Some of us have even debated what beer we’d want to have if we were stranded in the middle of the deep, blue sea.

I remember having this exact conversation several years ago with a group of friends: Jimmie would take West Coast IPA from Green Flash, Tracy wanted to have Sierra Nevada’s Pale Ale with her and Mark would pack Bear Republic’s Hop Rod Rye. For me, on that day and today, it is Stone Brewing Co.’s Ruination IPA.

What started as Stone IPA (Stone’s first anniversary brew), quickly morphed into hoppier, maltier second, third and fourth anniversary renditions. When they brewed their fifth anniversary IPA they hit the proverbial jackpot. With fans clamoring for more, Stone made the decision to make this one available year round. With a slight recipe tweak, this malty hop bomb was released in 2002 as Ruination IPA.

Although not the first double IPA on the market (that honor goes to Russian River’s Blind Pig, Ruination was the third), Ruination did become the first bottled IPA available. Ruination owes its popularity and beauty to the great balance that it produces between the malt profile and the hops. Whereas many other double IPAs are almost too hop-forward, Ruination’s crystal malt melds perfectly with the combination of citrus and floral Chinook, Magnum and Centennial hops to create an unforgettable brew.

I remember the first day I tried Ruination. It was on my very first visit to Stone Brewing Co. in Escondido, Calif. After a tour of the brewery with my sister, we were treated to multiple samples of various beers they had available at the time. A couple of our options were the regular Ruination and a triple dry-hopped version of this liquid ambrosia. It was the latter that I tried first, and I can’t tell you what it was, but I was instantly in love.

In 2012, Ruination rebooted with a special 10th Anniversary edition that was literally double the hops and malt. It was so successful that Stone later released the variation as a seasonal with a new name: Ruin Ten. Ruination and Ruin Ten are both examples that Stone got this one right. Go on, people, pick some up. Packs of four are usually priced around $9-$11 and available at area Spec’s, Gabriel’s and select H-E-Bs. –Jeremy Banas

I have to admit, it’s a bit perplexing for me to have to choose a cocktail for a desert island in the middle of this miserably cold winter. I cannot fathom hot sand, palm trees blowing in the warm ocean breeze and subsisting on coconuts and roasted pigs (I assume the island has pigs). Maybe if I poured sand all over my kitchen floor, opened up the oven and cranked up the heat, had a light shining in my face, put one of those CDs (remember those?) of ocean sounds on, closed my eyes and used my imagination real hard, I might be able to trick myself. But I doubt it.

So instead of a desert island, let’s say it’s an isolated research station in some remote, icy location, and I’ve got a lifetime supply of pre-batched cocktails sitting in barrels. What would that one cocktail be? In order for me to decide, I think I need to go back to California. Not actually go back, just go back in my memory, and take you along for the ride.

On cold, rainy days living in the Bay Area, we used to go to a San Jose diner named Original Joe’s. We would take a seat at the counter, order a porterhouse steak and watch the cooks slather both sides with butter before placing it on the grill in front of us. You could feel the fire on your face and smell the meat charring and sizzling. One time, my buddy went into the back of the restaurant, into the cocktail lounge, and came back with a Maker’s Mark Manhattan. I’d never really considered cocktails before that. I’m sure I’d had a few, mostly margaritas or other things of the sour variety. This was something different. It was lovely, a sort of reddish-gold liquid in a stemmed martini glass with a single cherry. And the taste! It was strong and complex. How can I describe how it first tasted? It’d be as difficult for me as describing my first kiss with an honest-to-goodness woman, or holding the hand of someone I thought might die. It’s for me. All I’ll say is, it was boozy and I was in love.

The Manhattan has all the subtle complexities I love in really fine cocktails. There would be plenty for me to discern drinking it every day on my desert island–I mean, isolated research station. There are many ways to make a Manhattan; adjust to your tastes. I happen to enjoy something like this:

Build in mixing glass, add ice and stir until chilled. Pour into a coupe, garnish with the cherry and enjoy, forever, until you die or are rescued.
–Jacob Coltrane Burris

Yes, I know not to take the desert-island assignment literally. But it is amusing to contemplate what wines might actually go with raw fish and coconut—presumably ones that also don’t need refrigeration. But let’s assume instead a Lost-style situation in which wines that mysteriously drop from the sky can be lightly chilled (when necessary) in pristine springs. Here’s what I’d pray to the gods of primetime for:

There would need to be some razor-sharp whites in case of clams or conchs; a dry riesling such as the Ravines from New York’s Finger Lakes would work, but let’s instead say a chalky Sancerre (sauvignon blanc) such as the 2010 Claude Riffault Les Boucauds. Assuming the seafood is being topped with a tropical fruit salsa, I might move sideways to a chardonnay-based Chablis such as one from William Fevre or, for a less pricey option, from Domaine Christian Moreau. If my deftly harvested oysters are being grilled over a driftwood fire, I’d look to a new favorite white, the godello from northwest Spain for its fruit and body. Consider the 2010 Godelia Godello Bierzo Selección.

Some more Survivor-like assumptions here: I have gathered the courage to move away from the shore and have managed to trap a hapless creature, so I’ll need a cache of reds. For small critters, I’d head straight to Beaujolais and the impressive 2011 Domaine du Pavillion de Chavannes Côte de Brouilly—though if the gods had stashed a Morgon or Fleurie, I wouldn’t object much. Emboldened to go after even larger game, I’d also have to secure some bigger wines. This is not the kind of situation in which one would sit around discussing the niceties of a Bordeaux or Burgundy with one’s self—no, for immediate satisfaction I’m heading downriver to the southern Rhône and old fave Gigondas. A ballsy blend of grenache, syrah and mourvedre such as the 2011 Olivier Ravoire would suit me just fine; the simpler but easier to find Perrin et Fils would do in a pinch. And since this is also Fantasy Island, I’m going to put in a plea for a Châteauneuf-du-Pape such as the 2010 Les Sablons Chapelle St. Theodoric made from old-vines Grenache. The 2010 Domaine Montpertuis would also go down well.

Having just shinnied up a palm to scan the horizon, I see sails in the distance: Rescue is imminent, and it’s time to celebrate with that bottle of grower Champagne (look for RM on the label) I’ve been saving for just this occasion. This is pure speculation, as I haven’t yet been able to afford any “farmer fizz,” but word has it that a récoltant-manipulant such as Pierre et Fils would be more than suitable. I should be able to finish the bottle before the ship arrives…
–Ron Bechtol