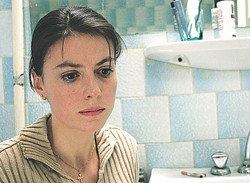 
Sometimes even the most jaded viewer can be confronted by a film so potent it challenges the very notion of why we go to the movies in the first place. This is that kind, a harsh, relentless gut-punch to the very concept of entertainment, one that nevertheless captivates and enthralls us in the lives of its characters so profoundly that it’s tough to watch and difficult to shake.

Much of that angst comes from this film’s subject: abortion, an issue so toxic in America that it’s scarcely been mentioned by any of the major presidential candidates in an electrified and deeply polarized election season. Consider then how taboo and frightening the subject of abortion and female rights must’ve been in the horror show of 1987 Romania, a nation caught in the stranglehold of a failing totalitarian system, one that had outlawed abortion, birth control, and divorce. (Women under 40 were required to have at least four children — hence back-alley abortions, extreme poverty, and overcrowded orphanages beset with a festering AIDS epidemic born of shared blood-transfusion needles.)

Director Cristian Mungiu recreates those days with stunning clarity, with a bleak, washed-out look matched by a grim emotional intensity that’s unflinching and outraged, empathetic and jaw-dropping. And it all unfolds in a 24-hour period.

Two young women, college roommates, are forced through the treacherous machinery of the country’s medical underground. Otilia is a sunny-eyed realist, faced with arranging an illegal abortion for her pretty, naïve friend Gabita, who continues to hide from the facts at every step of the process. The title references the actual length of Gabita’s pregnancy, a date that complicates an already illegal procedure by making it dangerous, severely limiting her (already) few options. Everyone in this little game is caught up in the gears of oppression, each extracting a steep price for their involvement, from the petty hotel clerk to the opportunistic abortionist Bebe.

His scenes are the film’s icky core, a terse claustrophobic drama of escalating consequences, sadness and moral volatility, brilliantly acted all around. Almost as gripping is the dinner party where Otilia must make nice with her boyfriend’s family, while Gabita lies alone and bleeding. The climax is as wrenching as any thriller, but never breaks rules that’ve been established here, never breaking trust or taking us out of the story.