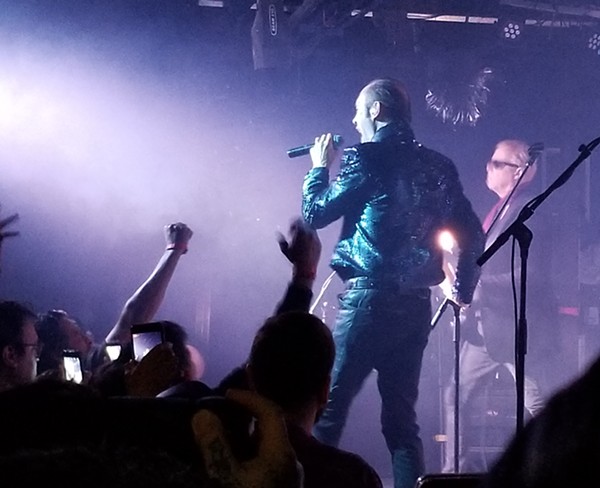 Bauhaus is a gothic rock band with legendary status in post-punk culture. Since forming in England in 1978, it's had a huge impact on countless dark and gloomy bands that followed.

And, in case you missed it, former members Peter Murphy and David J have joined forces for the Ruby Celebration tour, which cast its pall over the Paper Tiger Friday night.

The 40-year reunion tour reached the U.S. after several dates in Europe, bringing along a set list that included timeless pieces from the band’s first album, In the Flat Field (1980), including such classics as “Dark Entries,” “Telegram Sam” and a shimmering take on Bowie’s “Ziggy Stardust.”

Murphy and J obviously didn’t visit San Antonio to disappoint. During the band’s iconic “Bela Lugosi’s Dead,” Peter entranced the audience with menacing movements, a flowing red scarf and an upturned, vampiric collar. His facial expressions were commanding and sharp as he turned the mic to fans to repeat back that Bela was, in fact, undead. J, focused and cool in his sunglasses, slinked out the stylish bass lines fans have loved for so many years.

Refreshingly, the three-piece opening act, Desert Mountain Tribe, was no gothic wannabe. Their style wavered between a ’90s rock sound and older influences, maybe the Doors, Zeppelin … something. It was different, strong, dark at times — but always solid and well-played — and it kept the crowd’s interest.

The reunion of Murphy and J brought an impressive turnout. No doubt because something endearing will always remain in the hearts and memories of Bauhaus fans. Even though the band now exists only in fragments (this reunion was missing former members Daniel Ash and Kevin Haskins), what it created still brings joy to those who can witness the striking talent that remains.

Murphy and J showed Bauhaus is timeless, still able to bring out those dedicated fans from earlier years while also drawing younger ones interested in experiencing what made the band so vital and influential.

On Friday night, San Antonio proved all of this to be true. Packed inside the Paper Tiger, fans danced, swayed and sang along with a piece of music history. With legends.