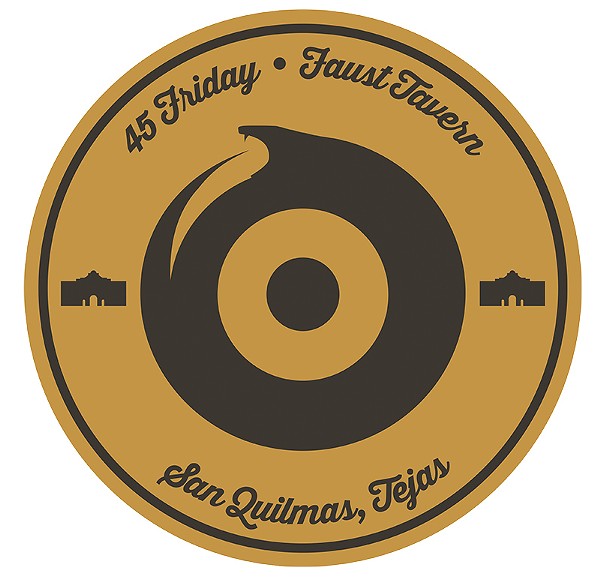 Consider the 45 record. Smaller than its slower-spinning, more popular cousin the album, it's a listening experience custom built for purists. Mastered a bit louder than an LP track and lacquered with bright, one-of-a-kind label decals, it's all too easy to catch the collector's bug and scoop these records up one song and one side at a time.

At 45 Friday, the vinyl night's rotating trio of DJs provide the joy and efficacy of these seven-inch singles with none of the cost or time spent rifling through Internet forums or flea market bins. From its humble beginnings two years ago as a one-off, battery-powered gig, 45 Friday celebrates its eponymous discs — once the most popular medium in the industry.

"You get a band in the studio, you record, you get a hit, you rush them back and do a follow-up single," said 45 Friday DJ Brian Poust. Between sentences, Poust's pit bull Ronnie Foster — named after the Blue Note, acid jazz organist — licked all parties up and down. "You could get it from the source quick, sell it to the kids. The album as a format was originally more for older quote-unquote sophisticated audiences. Albums marketed as jazz and classical for a long time. Even the early albums from the '60s, all they would be was a collection of singles with a few cover songs thrown in as filler. It wasn't until the later '60s that you started getting cohesive, whole albums that were meant to be listened to from start to finish."

Known among record collectors as Agent 45, Poust first met 45 Friday founder Rae Cabello on vinyl forums online. Striking up a friendship offline, Cabello invited Poust to join the every-other Friday party at Faust once Poust moved to town. Cabello, inspired by the days when "people would go to Military and cruise and listen to oldies," converted from a collector to a DJ to share his soul love and hometown pride.

"People say 'Oh, that town's been dug out' and it's not true," said Cabello. "There's so many bands that put out so many things. People say 'San Antonio has already been discovered.' No it hasn't, I find stuff and I think 'Who the hell is this guy? I've never heard of this guy.'"

JJ Lopez, the final spinner of the trifecta, finds a unique outlet at this vinyl night at Faust. Known for his command over the intersection of soul, jazz and disco, Lopez normally plays 'em loud, with smooth transitions and steady quick tempos to support dancers. Among the soul food and uneven cobblestones of the Faust patio, 45 Friday is as an opportunity to swap knowledge andexplore different material.

"It's not a demanding dance floor," said Lopez. "You're playing songs for people to enjoy."