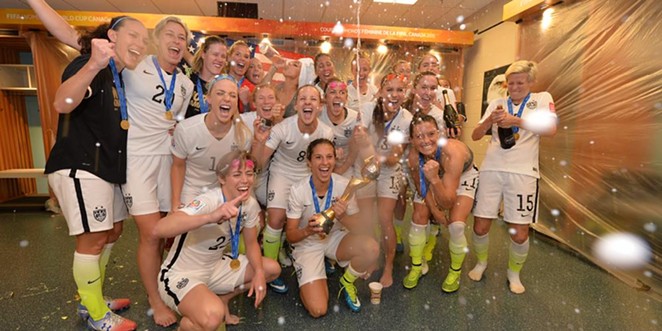 In a captivating game that concluded a fantastic Women's World Cup In Vancouver, Canada, the U.S. Women's Soccer team came out on top, beating Japan 5-2.

Not only that, all-around bad ass Carli Lloyd scored three goals, all in 16 minutes, which has never been done before in the tourney. She also scored the quickest goal in the tournament's history after just three minutes of play time. That wasn't the only record, either, the U.S. Women's Soccer team is the first team to win the Women's World Cup three times.

However, naturally, a bunch of sexist bottom-dwellers who feed on the world's shit took to Twitter to remind people that the U.S. Women's team — an inspiration to girls and boys alike — can't play soccer.

While this country has come a long way in battling sexism, assholes like this still exist.

OK guy with the Homer Simpson picture and a Twitter handle about having sex with whales. You're definitely legit.

Whenever I play indoor soccer with women I fucking hate the fact that I can't be rough with them, I'm a misogynist right?

No Igor, that just means you like to hurt people — female or male. Go see a psychiatrist before you get locked up.

Rape is not a joke, jack ass. With that attitude, this guy might end up with first-hand experience, in a penitentiary.

OH I CAN'T PLAY WOMEN'S SOCCER BECAUSE I'M A MAN? I'M TIRED OF THIS MISANDRY BRINGING ME DOWN!

Kind of speechless on this one.

However, the positive and celebratory far outweighed the stupid.

Since we are putting a woman on the $20 bill, why not the #USWomensSoccer team? @alexmorgan13 & @CarliLloyd? pic.twitter.com/xS3VI3MwVW