5 Tim Duncan Commercials to Help You Cope With His Retirement 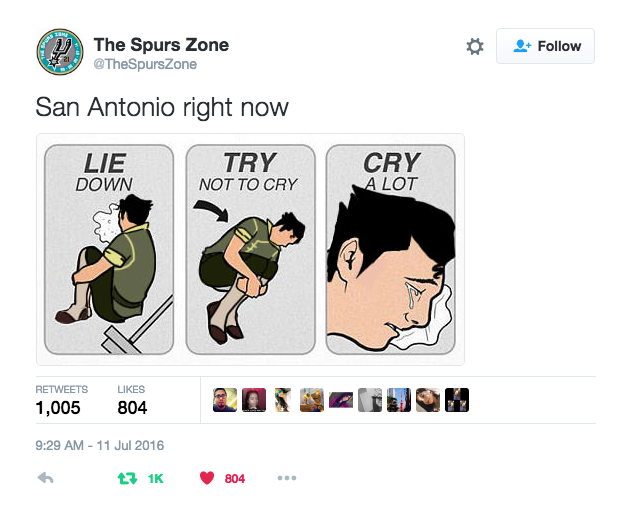 Between scouring the interwebs trying to read just about every think piece/thank you note/career compendium on Tim Duncan and holding back pre-cry breaths because the greatest power-forward/center/role model is retiring from the league, we're trying to find ways to cope.

For this Alamo City transplant, Tim Duncan is San Antonio: modest, kinda funny, relatively quiet, has its moments. Timmy gave the city 19 years worth of subdued greatness, and when the Spurs won their third championship in 2005 fresh off my first year at UTSA, I finally understood how special Duncan and the rest of the team is to this city.

The news won't really sink in until October when he doesn't join his teammates on the court as a player (assistant coach perhaps?!), but it wasn't like TD to have a year-long retirement closure party a la Kobe. Until that day comes, I'm just going to keep watching Timmy's best moments on the court (blocking, winning, being generally awesome) as well as off the court, when he graced an adoring audience with that subtle brand of humor best exemplified in H-E-B commercials.

Here are some of our favorites. #ThankYouTD

He knows his style needed work. Timmy wasn't going to land on GQ's best dressed of the week list any time soon, but he was able to laugh it off. Exemplifying once again that über-casual San Antonio feel.


A role model for all his teammates with kiddos, Timmy D's dad jokes were priceless.


Seriously. Tim-tanic? If that doesn't make you chortle, you're probably dead inside.


The level-headed voice of reason, Timmy usually closed out most H-E-B commercials with some sort of clutch hook that'd drive anyone straight to the nearest B. Whether it was brisket, organic free-range chicken or ready-made jalapeño poppers, his brand loyalty encouraged most of San Antonio's commitment to whatever H-E-B is hawking.

This one's a bit of a throwback. Less flashy than the newer commercials and co-starring Brent Barry and Bruce Bowen, Timmy's commitment to the goofball script along with that deadpan delivery probably launched 1,000 Onion articles such as "Tim Duncan Busy At San Antonio Zoning Office Planning Spurs Championship Parade Route" or "Tim Duncan Hams It Up For Crowd By Arching Left Eyebrow Slightly" or their latest compilation, "Tim Duncan: An NBA Legend Rides Into The Sunset At A Safe And Prudent Speed."


And here's another just for fun. Timmy ribbing himself, because even when he leaves a giant 6-foot 11-inch hole in our hearts, he knows it's only the game that matters not how he's perceived by the nation over as he succinctly puts it in this 2012 Sports Illustrated cover feature.

Doesn't he care about how he's viewed, how he's remembered?

Duncan thinks for a second, pulls on the sleeve of his silver Spurs sweatshirt. "Why?" he says. "I have no control of that. All I can do is play and try to play well. Winning should be the only thing that matters. I can't manipulate how people see me."

But that's not true at all, he's told.

He considers this, then frowns. "I mean, I guess I could. I could be more accessible and be the darling for everybody. I could open up my life and get more endorsements and be out there and be a fan favorite. But why would that help?"

He pauses for a moment. "Why should it?"