The mad dash of fall is past, replaced by the quarterly stretch of “The Holidays.” Whether you’re taking planes, trains and/or automobiles to celebrate with family (or getting the house ready for a tíos y tías takeover), taking a breather between semesters, or trying to source the Talkboy 2.0, it all goes down easier with a beer. The five beers below are pegged to the many ways we celebrate during the winter — all Texas and mostly from Bexar County. Some bottles are rarer than others, so be sure to give your favorite store a ring before you head out — though after a few days in close quarters with your relatives, a long, winding car ride with your cooler cousins might be the greatest gift of all.

The brewing process for Sangre De Shiva is as complex as the nature of the Destroyer himself, but the outcome — a cosmos-dark, tannin-forward ale that shifts between chocolate raspberry, balsamic leather and sensual pinot noir with each sip — is just as transcendent. Open a bottle up on Kartik Purnima (the feast commemorating Shiva’s whuppin’ up on the demon Tripurasura) and pair with channa masala.

Freetail’s “Black Bat” IPA (kudos maximus for nailing the Latin, guys!) smells sweeter than the average BIPA, though it’s leveraged by some earthy hoppiness. It tastes sweet too, with loads of caramel-laced malt that brings to mind the spent-grain porridge my homebrewing buddies make after a mash. An un-pale ale, if you will. Drink it with some salty cheese like Roquefort or goat milk gouda during your Saturnalia revelries in December. 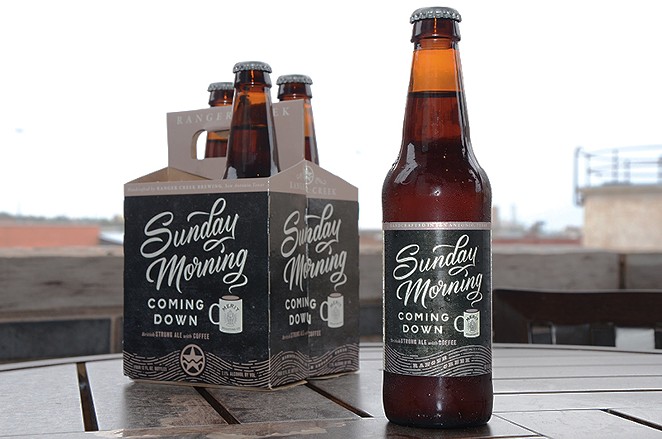 Branchline Brewing’s 5 AM To Midnight Stout

If you’re skeptical about seeing mint listed on your stout’s label, fear not. Paul Ford’s recipe blends the herb effortlessly with espresso and cocoa against a sturdy stout backbone, pairing crisp bite and chocolatey caffeine spark like an after-dinner cup of coffee with Andes mints. Parents who will count themselves lucky if they finish assembling Christmas presents before 5 AM should take note: It’s not quite Santa’s glass of milk and plate of cookies, but a pint of 5 AM to Midnight and a sleeve of Walker’s Pure Butter Shortbread cookies goes a long way toward making hearts merry and bright.

Advent precedes Christmas by four to six weeks, depending on whose calendar you’re on, and even the marginally observant among us might be inclined to go back to church. If you haven’t been back to the parish in at least two Popes and need to fortify yourself, consider Ranger Creek’s Sunday Morning Coming Down. An English strong ale brewed with Merit Coffee espresso, it’s a calm beer, big on the caramel and coffee but smoothed out by milk and vanilla notes, so it should ease any anxiety about remembering when to stand, sit or kneel. Plus it’s named after a tune by Johnny Cash, who knew a thing or two about sneaking late into the back pew.

Honest Of Reason proves that Gulf Coast brewers can nail a West Coast IPA. It’s a gusty departure for Southern Star, both in flavor (some cranks claim they shouldn’t attempt any IPA besides Pine Belt) and in design (the can is wrapped in a dreamy impressionist painting by local artist M.H. Draper). With its fiery orange hues and bright tropical hops, it’s a perfect blending of image and flavor. On New Year’s Eve, pop a top on a few of them while chowing down on fried chicken (diet starts tomorrow, right?), then make a bold (but not bitter) toast to 2016.