This post marks the beginning of a new department for the Gentleman Gamer: 5MB.  Read and infer.

1MB El Shaddai: Ascension to the Metatron is a pastel-colored brawler with Biblical roots and developers from three really great games on board. Gameplay-wise, the game is straddling poetic fluidity and boring-button mashing, according to 1up's Jeremy Parish. The video preview in his report betrays an overall "Japanese" flavor (think any anime-based game), but I'm particularly interested in the game's visual style: a marriage of the ethereal-ness of Shadow of the Colossus and traditional anime heroes. [1up]

2MB The new PS3 firmware is out and, as usual, Sony's official statement seems to be masking ulterior motives. The media juggernaut says they've received reports of contraband controllers being sold for the system and that they are combustible (yes, you read that right.) The new firmware disables these controls. Mysteriously, it also disables several 3rd-party peripherals, which may or may not be contraband. Sony's recommendation: stick with their 1st-party peripherals. Interesting. [Game Politics, CNET]

3MB Phil Spencer, VP of Microsoft Game Studios, is telling the press that he'd like to release Halo sequels at a faster rate than every three years. Spencer would like to follow the Activision release model (Call of Duty), whereby a new game in a franchise is released, but the quality of the update doesn't suffer. Spencer also acknowledged that franchise-milking is a problem, chiefly in the sports genre. [Kotaku, IGN] 4MB Nintendo turned 121 years old yesterday. What, you didn't know they had been around more than a century? Indeed. The cultural and technological icon actually began as a card game company in 1889, which provided a fitting foundation for their future crack-for-kids franchise. [G4TV] 5MB Finally, from Tiff Chow's blog, here's an 8-bit rendition of Ghostbusters (not from any actual game): 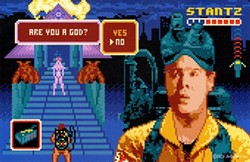 Tiff, in addition to being my future wife, is a lover of alternative, techy, nerdy art. This work is by Jude Buffum, who displayed it with two others in the recent 3G art show in Los Angeles. You may have read in this week's issue that I'll preview the synesthesia game Child of Eden by Q? Entertainment. Stay tuned. -GG