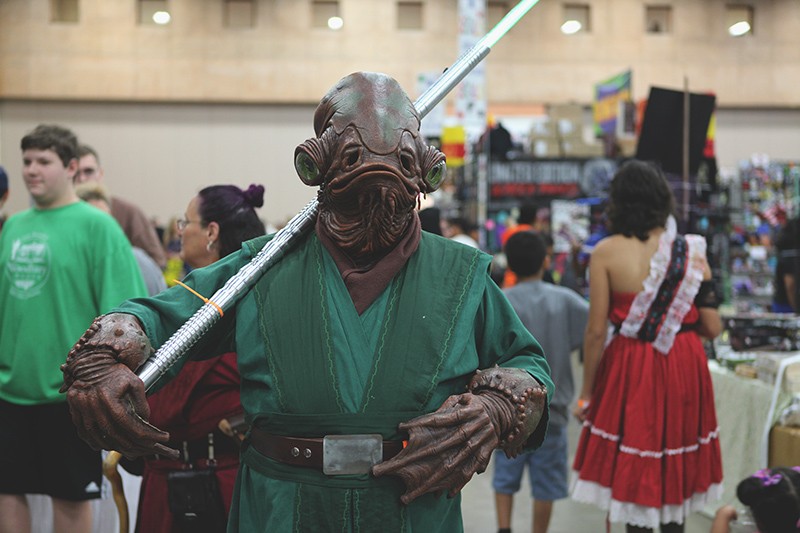 Geek culture has outgrown the comic book shop and gone mainstream. The superhero, sci-fi and fantasy nerds that were tormented in high school turned out to be tastemakers, and they've taken over pop culture with their superhero obsessions. Resistance is futile, as the Trekkies would say. So rather than fight the nerdy invasion, embrace it by taking part in San Antonio's growing geek community.

Start by purchasing a weekend pass to Alamo City Comic Con (alamocitycomiccon.com). Held at the Henry B. Gonzalez Convention Center (200 E. Market St.), the expo celebrates comic book and pop culture fandom with three days of events, panels, attractions and cosplay. Despite being a relative newcomer to the national comic con scene — the inaugural event took place in 2013 — ACCC has proven extremely popular with area fans. More than 73,000 people attended the event in 2014, and in just two years, ACCC's attendance figures have outpaced numbers for more established pop culture conventions.

Alamo City Comic Con also provides a showcase for figures in the local geek community, with the inclusion of the Nerd411 podcast, and de la Fuente's own Guardian Knights Comics. Members of San Antonio's vibrant cosplay community also take to the convention floor in full superhero and sci-fi ensembles.

The 2015 convention is scheduled for September 11-13, giving you ample time to invest in spandex and perfect your superhero cosplay. This year, organizers plan to expand the convention's size and scope with the addition of the Alamo City Film Festival.

Of course Alamo City Comic Con isn't the only game in town. The San Japan Convention (san-japan.com) celebrates anime, manga, J-rock/pop and other Japanese media. This year's event, set for July 31-August 2 at the Henry B. Gonzalez Convention Center, marks San Japan's eighth convention. The weekend is expected to attract more than 15,000 Japanophiles. Even if you don't know your Full Metal Alchemist from your Dragon Ball Z, it's worth attending San Japan just to see the impressive costumes attendees make to cosplay as their favorite anime characters. Scheduled events include a formal masquerade ball, the San Japan Idol karaoke contest, a live action Pokemon Battle, J-rock/pop concerts and midnight dance parties.