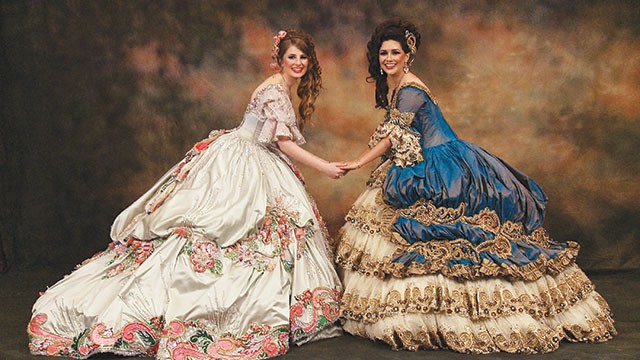 That’s not to say Mendiola isn’t open to films coming from beyond the border. This year, 10 films from Mexico will screen at CineFestival, six of which are a selection of short films from the 2013 Morelia International Film Festival (MIFF) in Michoacán, a festival Mendiola attended last November.

“The films they’re making in Mexico are really important, especially since we’re only 150 miles from the border,” Mendiola said. “The festival in Morelia is a model of how I would like CineFestival to eventually grow. [MIFF] is only 11 years old, but in those 11 years it has become one of the premier festivals in the world.”

With a distinct strategy, Mendiola and the rest of the Guadalupe Cultural Arts Center’s leaders seem poised to find and bring that Latino talent to San Antonio annually. It’s with those aspirations, along with a three-day Latino screenwriting workshop in partnership with the Sundance Institute and GCAC’s dedication to local student filmmaking, that CineFestival, despite now choosing films made closer to home, is definitely going places.

Below are eight films I had the opportunity to review just in time for the start of the festival this Saturday. For a complete schedule of CineFestival screenings and events, visit guadalupecuturalarts.org.

Cesar’s Last Fast
(Opening Night Film)
7pm Sat, Feb 22 (100 min)
One can only hope the upcoming biopic Cesar Chavez, starring actor Michael Peña as the late civil rights activist and labor union organizer, will be as insightful and poignant as Cesar’s Last Fast, a documentary that spotlights Chavez’s 36-day hunger strike in the summer of 1988 and presents it as the heart of his lifelong effort to improve the lives of migrant farm workers. Through never-before-seen footage, moving interviews with family members and former United Farm Workers staffers and supporters, and the words of Chavez himself, Cesar’s Last Fast, which made its world premiere at the Sundance Film Festival this year, reflects Chavez’s commitment to lead an agricultural revolution in the U.S. Filmmakers Richard Ray Perez and the late Lorena Parlee have created an adoring and inspirational portrait of one man’s “expression of sacrifice in action.”

Rebel
7pm Tue, Feb 25 (75 min)
In Rebel, director Maria Agui Carter attempts to piece together the story of Loreta Velazquez, a woman who, according to her disputed memoir The Woman in Battle, disguised herself as a man so she could fight for the Confederate Army during the American Civil War. With little content to work with besides Velazquez’s book and an assortment of scholarly interviewees taking turns conveying the same oral history, Carter’s approach to the film is unconventional and ultimately useless. Part talking-head documentary, part second-rate reenacted drama, Rebel is never quite sure what it wants to be and ends up playing both sides halfheartedly. The story might be a fascinating one, albeit not exclusive to Velazquez, but with an unnecessary cast and scenes brimming with filler, it’s one history buffs could experience with less superfluous material through their own independent study on the subject. For a different take on the doc (which debuted on PBS last May), read Patricia Portales’ review.

Las Marthas
9pm Tue, Feb 25 (69 min)
To call the month-long, Fiesta-like celebration of U.S. President George Washington that takes place every year in Laredo “bizarre” is an understatement. In the well-crafted documentary Las Marthas, which won the Special Jury Award at this year’s festival, director Cristina Ibarra explores the rich tradition sponsored by the elite Society of Martha Washington in which young women, mostly Mexican-American, are presented in extravagant gowns (some worth up to $30,000) at a colonial ball that is the center of the festivities. For most of the film, Ibarra follows two debutants as they prepare for the event’s finale. Give Ibarra credit, however, when she is brave enough to challenge some of the ideals behind the celebration instead of simply praising it for its longevity. Las Marthas, which KLRN screened as part of their Community Cinema series, is a unique look at social classism in South Texas and Mexico that asks some valid questions about family lineage.

Rezeta
9pm Wed, Feb 26 (85 min)
There is a purity to first-time feature writer/director Fernando Frias’ love story Rezeta that makes the film emotionally palpable and sincere. Winner of the Best Narrative Jury Prize at this year’s Slamdance Film Festival, the romantic dramedy stars Rezeta Veliu as her namesake, a professional Albanian model working in Mexico City until she flies off to wherever her next gig takes her. When she falls for Alex (Roger Mendoza), a punk-rock drummer, Rezeta must decide if a relationship is enough to keep her grounded. As fancy free as its main character, the film manages to capture a litany of sensations a new relationship might produce, especially with Veliu and Mendoza, both non-actors, freestyling off each other’s dialogue with ease. Well-paced, although real time doesn’t seem to fit into Frias’ storytelling structure, Rezeta isn’t necessarily breaking new ground from a narrative perspective, but it’s at its best when the boy-meets-girl storyline refuses to get bogged down by cliché.

Cry Now
7pm Fri, Feb 28 (87 min)
It’s love at first sight for two Angelenos in director Alberto Barboza’s feature film Cry Now, a barrio romance that puts us at the center of LA’s predominantly Latino Boyle Heights neighborhood but struggles to find a true connection between its lead characters. When street artist Vincent (Miguel Angel Caballero) meets tattooist Luzi (Iliana Carter, a dead ringer for a Liv Tyler/Eva Mendez hybrid) the two want to be together but are already involved with other people (Luzi’s LAPD boyfriend is financing her tattoo shop; Vincent’s vindictive ex-girlfriend would be a pretty good telenovela villainess). Barboza’s direction is solid, but the script lacks a reason why this relationship should work and never fully explains whether the characters are driven by destiny or the need for artistic inspiration. Still, the dreamlike imagery is a nice touch when Barboza uses it sparingly at the beginning and end, and the soundtrack is very enjoyable. Plus, seeing late actress Lupe Ontiveros (Real Women Have Curves) in her final screen performance should be an honor for everyone.

Los Wild Ones
9pm Fri, Feb 28 (78 min)
There’s no denying the total commitment Los Angeles-based indie record label owner Reb Kennedy has to the Latino rockabilly musicians he takes under his wing. In the documentary Los Wild Ones, it’s Kennedy who is on the cinematic main stage for most of the picture as director Elise Salomon fashions an interesting character study around a man who has given his life to the bands he manages. Sure, he uses a little tough love and his controlling nature might alienate and hinder some acts, but the reality of this cutthroat industry as shared by the featured musicians is refreshing. Thematically speaking, Salomon tackles a few too many issues, which keeps the film from finding a real emotional hook, but when she turns her camera on Kennedy and some of the stronger personalities, there’s plenty—including the music—to love.

Ruben Salazar: Man in the Middle
1pm Sat, Mar 1 (57 min)
The ambitious career and controversial death of Mexican-American journalist Ruben Salazar is revisited in the compelling documentary Ruben Salazar: Man in the Middle, winner of the Best Documentary award at this year’s festival. In the film, director Phillip Rodriguez recounts the motivation, frustration and passion that led the pioneering reporter to the center of the Chicano movement in the late 1960s. On August 29, 1970, during the frenzied National Chicano Moratorium March in East LA that took place in protest of the Vietnam War, Salazar, who was working for the Los Angeles Times and TV station KMEX at the time, was killed when a sheriff’s deputy shot a canister of tear gas into a local café that struck him in the head. Through intense archive footage, interviews with friends, fellow journalists and activists, and narration of Salazar’s own deeply personal writings, Man in the Middle, despite its restrictive one-hour runtime, is an effective biography that allows viewers to see this explosive era through the eyes of a Mexican-American who wrote the truth so he could make a difference.

La Jaula de Oro
7pm Sat, Mar 1 (108 min)
Winner of the Best Narrative Film at this year’s festival and the 2013 Cannes Film Festival’s prestigious A Certain Talent Award, Spanish director Diego Quemada-Díez’s drama La Jaula de Oro, which was actually made in Mexico, is a graceful yet incredibly disheartening immigrant story. Reminiscent of the powerful 2009 film Sin Nombre by director Cary Fukunaga, it could be argued that the tone of La Jaula, a film that follows the dangerous journey to the U.S. by three desperate Guatemalan teenagers (non-actors Brandon Lopez, Karen Martinez and Rodolfo Dominguez), creates an even more harrowing narrative that its predecessor. La Jaula stands on its own, however. Quemada-Díez, who worked as a camera operator on a number of films including 21 Grams and The Constant Gardener, has let a little Alejandro González Iñárritu and Fernando Meirelles rub off, which is never a bad thing.