A Behind-the-Scenes Look at Trans-Siberian Orchestra 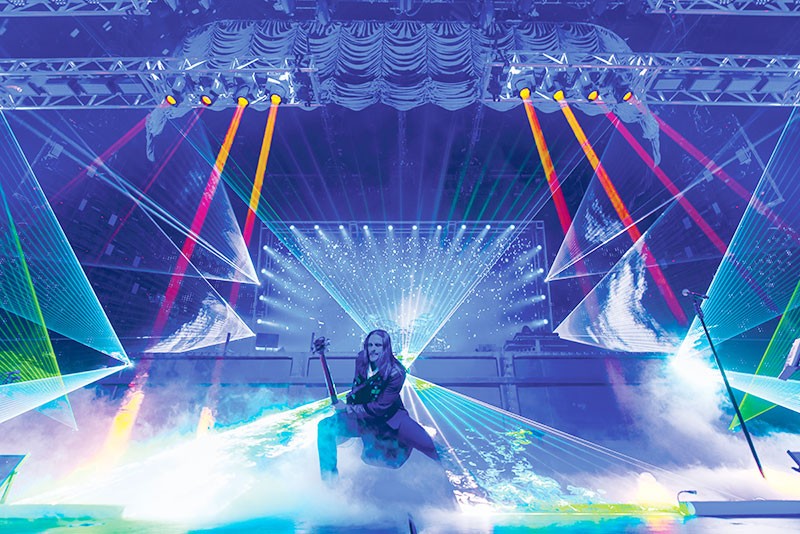 "We have stuff everywhere," says Adam Lind, the self-proclaimed "guy who's responsible for everything that goes wrong." Lind heads up Night Castle Management, the firm that handles all of Trans-Siberian Orchestra's "artistic endeavors." He makes the remark as he walks through the cluttered hallways of Mid-America Center in Council Bluffs, Iowa, a small town just across a bridge from Omaha where the prog rock band rehearses each year in preparation for its annual winter tour. To say TSO has taken over the venue would be an understatement.

You can hear wailing guitars and operatic vocals emanating from behind the closed arena doors as the band practices tunes such as "What Child is This?" and "Music Box Blues." Inside roadies walk the empty arena floor while carrying open laptops. A giant pyramid-like contraption sits under a black tarp as if it's a modern-day Batmobile, ready to shock and awe once the tarp comes off.

For the past seven years, the group has rehearsed in this small, centrally located town that puts the East and West Coast versions of the tour in prime launching position. A fleet of trucks and tour buses are already positioned in the arena's parking lot. Soon, they'll roll out and haul crew and gear across the country for the next eight weeks to bring the biggest, baddest, most over-the-top and extravagant Christmas rock show you'll ever see.

When he was young, Paul O'Neill, the group's mastermind, had trouble reading anything more sophisticated than Cat in the Hat. In the first grade he was in danger of falling behind. But then his mother spent a summer teaching him phonetics, and the floodgates opened as O'Neill, whose parents forbid him to watch TV, started devouring the books around the family's home. Now, he easily recites facts from European history and quotes Cicero.

As he was learning to play guitar, he went to see The Who perform at Madison Square Garden in the late '60s, something he describes as a pivotal moment.

"The Who were the only band that I walked out on because they were so good I couldn't stand watching them," says O'Neill, who, with his black leather jacket, dark Italian sunglasses, speckled gray beard and shoulder length hair, looks like a cross between a member of the Ramones and a Lord of the Rings wizard. His dressing room includes a keyboard, two guitars and a KISS-themed pinball machine. For guests, the room also contains a few cases of Trans-Siberian swag — a stack of denim jackets with the TSO emblem on the back and CDs of the band's new album, Letters from the Labyrinth. He gives the stuff away at such a rapid pace the cases have to regularly be replenished.

Later, as he toured with Aerosmith in the '70s, he started collecting letters and developing his esoteric sense of the world. He has every letter from Thomas Edison. He bought the letters through the auction house Christies and at various estate sales.

These literary sensibilities would inform the prog band Savatage, which originally recorded "Christmas Eve Sarajevo 12/24" in 1995. The song would reappear on TSO's debut, 1996's Christmas Eve and Other Stories, and launch the band into the behemoth that it is today.

In 1998, the band recorded a TV show before it had ever toured. O'Neill has described it as the band's "first show."

Filmed in an old Jersey City theater, the show features Ossie Davis, Jewel and Michael Crawford. O'Neill has said the band, though still in the early stages, captured a certain "magic," as the special features some of the best songs from the band's catalog at the time.

At the urging of Cleveland disc jockey Bill Louis, the group took its 1996 Christmas rock opera Christmas Eve and Other Stories, the first part of a trilogy of prog rock-influenced Christmas albums, on the road in 1999. Lewis had been playing the album's single, "Christmas Eve Sarajevo 12/24," on WNCX and had gotten great feedback from fans.

"He said, 'You can do a show in New York, but not in Cleveland?' So he nagged me to death," O'Neill says of Lewis. "Turns out, he was right. The first show sold out in four hours."

The group then added another Cleveland show and that sold out. A third was added. It also sold out.

Cleveland-based Belkin Productions also booked gigs in Detroit, New York, Philadelphia and Chicago. With the exception of Chicago, each show exceeded expectations. The following year, the band hired Elliot Saltzman to be its tour director as it expanded to about 30 shows with two different installations traipsing across the country.

That incarnation of the tour had a good 13-year run before O'Neill decided to mix things up, often playing new albums in their entirety while still incorporating the "hits." Now, it's consistently one of the highest grossing tours in the world.

In its 19-year history, TSO has played more than 1,600 shows for more than 11 million fans, officially making it one of the world's biggest arena rock acts. For the past several years, the band's winter tours have consistently ranked in the Top 10 for attendance and grosses; back in 2009, Billboard called it one of the "Top Touring Artists of the Decade." Last year's 2014 Winter Tour grossed more than $51 million in 52 days; it played to nearly one million fans.

This year's "Ghosts of Christmas Eve" production will hit 60 cities across North America to perform 100 shows. Based on TSO's multi-platinum DVD and long-running PBS fundraiser, the concert follows the journey of a young runaway who, on Christmas Eve, breaks into an abandoned vaudeville theater seeking shelter from the cold. She then experiences "ghostly visions" from that concert hall's past. The band will also play past hits such as "Christmas Eve Sarajevo 12/24," "O' Come All Ye Faithful," "Good King Joy," "Christmas Canon," "Music Box Blues," "Promises to Keep" and "This Christmas Day" during the two-hour concert.

As a dress rehearsal of the current show commences, which O'Neill says hearkens back to TSO's beginnings, O'Neill arrives on stage, black guitar strapped across his chest. He unleashes one meaty riff after another while a tender Christmas tune featuring children singing plays over the house PA. Huge flames shoot from the rear of the stage as a crew of sound guys hovers over mixing boards and computers, adjusting the sound levels and positioning the tresses near the arena's roof. "Freebird!" yells one roadie, causing O'Neill to break into a smile. And when the crew cranks up the pyro, O'Neill responds favorably. "Fuck, yeah!" he screams.

"TSO is all about walking out of the show and saying, 'That's the best show I've ever seen,'" he says. "The firepower we have out there is unparalleled. We spend in the millions of dollars for lighting and pyro. For us, it's full blown. It's a risk, though not so much now that we have a dedicated fan base. But these are lighting and pyro effects that people have never seen before. You will never see this many lasers in your life. At one point, it looks like the whole stage is morphing and coming off its tracks and moving toward you. It's an onslaught. It's visual and sensual experiences you've never had before. It's like putting on a new dress."

Saltzman concurs as he watches a dress rehearsal of the 140-minute show come to an end.