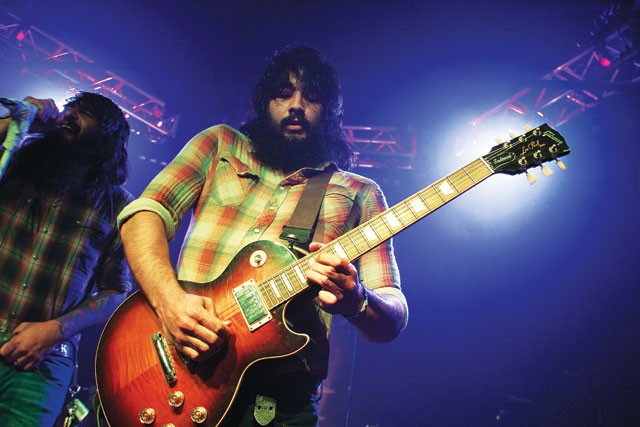 It doesn't get any harder than this, unless The Panic Division turns it up to 11. But they don't need to: Colton Holliday's band has enough to go toe-to-toe with hard-rockers The Heroine, Memory of a Melody, and Cult to Follow (iTunes has CTF's single "Leave it all Behind," from their upcoming 2013 album). That's the lineup for the third annual edition of Melody Fest, Friday at AT&T Center's Bud Light Courtyard.

Yet, in San Antonio I still haven't heard a band that mixes power, stage presence, and skill better than The Heroine, which has been touring and recording all year long.

"It's been a very crazy and busy summer," singer Lynnwood Presley King told the Current. "March-June is still a blur, but we're so excited that our new single, 'Coming Home,' will be hitting radio very soon." The Heroine's long-awaited new album is being recorded and produced by Jay Baumgardner (Helmet, Papa Roach, Death by Stereo) at North Hollywood's famed NRG Studios and will be released by EMG in early 2013.

The Panic Division can rock hard, but that's not what the band is all about. Holliday's project came back from an extended hiatus with Eternalism, one of the best local albums of 2012, and their June show at 502 was another solid proof that Holliday's relevance is intact.

Incidentally, Holliday — a graphic designer — is also behind what I consider the two best-designed/packaged local CDs in the last 12 months: his own Eternalism and Memory of a Melody's Things That Make You Scream, which was followed up by Official Live 2012 in July. Memory of a Melody is the force behind the festival, and this year the band is aiming high.

"Every year [the festival] has grown bigger and bigger," said singer Mario Galdos. The first two editions were held at Broadway 50/50 Colonnade and Backstage Live. "This year our hope is to make the show the biggest and best to date. Our purpose remains the same: to bring some of the best and most hard-working bands together on one great stage to do what they do best — rock!"