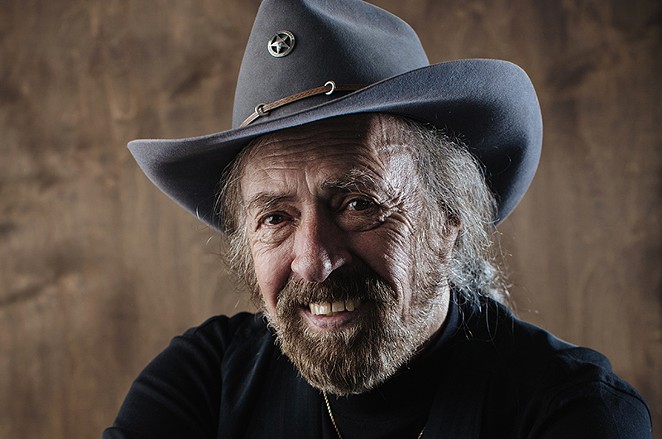 Before interviewing Augie Meyers for the San Antonio Current, I should have been racking my brain, scouring liner notes, session player listings and biographies of Dylan, Waits, Willie or a myriad of other movers and shakers of the last 50 years of popular music, searching for the ideal inquiries that would pull the truths, myths, legends, tall tales and short lies from Augie’s mind. Instead, I was getting lubricated, shooting the bull — aptly and poignantly as tequila encourages — and listening to Shotgun Willie on repeat.

Flipping the record over to survey the players that color Willie’s first Atlantic record, as well as the first record of country music released by the label, my eyes caught sight of the fourth name on the last song of side one: Augie Meyer [sic].

This is exactly why I had shirked my research duties. The music gods deliver when your heart is true, the music is good and the company is worth keeping. Augie Meyers must have made some Faustian deal with these same gods because his career as a bandleader, session man, songwriter, and musician’s musician is one to envy. Here’s Augie himself:

“When I was 16 I drove my motor scooter all the way to Houston to see Jimmy Reed took me five and a half hours, but we became good friends and I played a club in Houston back in the ’70s called Liberty Hall and I opened the show for ‘em. We were sitting in the room one night and he told me a story, he said, ‘I had this woman one night, I had me a bottle, I had $5,000, my guitar and we went to my room, we partied all night and in the morning the bitch was gone, my guitar was gone, the money was gone, my bottle was empty.’ I said, ‘Jimmy, how many times did that happen?’ He looked at his fingers, counting, he said, ‘Too many.’”

Well, I knew Willie before Willie was Willie. I had a 36-acre farm in Bulverde and Willie used to take his mobile home out there, run a 100-foot extension cord and stay two or three days. I used to see him at Floore’s with a bowtie and a flat-top. He wasn’t getting high.

Where did the ‘Vox Sound’ come from?

Chuck Wood at San Antonio Music, we were looking through a catalog, I told him ‘I like this keyboard, can we get one?’ He said, ‘I’ll have to write them [Vox] a letter.’ He called me back about a month later, said, ‘I can get that keyboard, but it’s gonna cost a lotta money — $285.’ I said, ‘I want one.’ The only reason I wanted one is because the black and white reversed keys.

The Dave Clark Five came to town and my band The Goldens opened up and Doug [Sahm]’s band played. The Dave Clark Five were gonna cancel the show because they didn’t have a Vox Organ, and I said, ‘Well, I’ve got one.’ The only one in the US. That’s how we met Huey P. Mueax. Huey had a barbershop in Winnie, Texas, and he was putting records out already. He told me and Doug, ‘Put a song together.’ So, we went to the Blue Note.

Women used to wear long dresses, petticoats, and this guy used to get on this girl and hold her from the back like, excuse my language, he was giving her head, and watching the way she moved Doug said, ‘Man, she’s a body mover.’ Well, that’s where ‘She’s About a Mover’ came from. ‘She’s a body mover.’ We had to change the title. Four weeks later we went to Houston and cut it.

Our record was doing real good in England, we did a show called Ready, Set, Go! and George and John and Paul [The Beatles, duh] came in and said, ‘How do you get your sound on your Vox, we can’t do that?’ I said, ‘Super Reverb.’ Next week all the stores in England had it.

How does it feel to be considered a legend and to have played with so many legends?

You meet people as you go along down the line and they’re just musicians … they’re just friends. My daddy was from rodeo people and one day at the rodeo I said, ‘Daddy, that’s Roy Rogers’ and he said, ‘Calm down, boy.’ And I said, ‘but that’s Roy Rogers, Daddy!’ And he said, ‘When you go to the bathroom, who wipes you?’ And I said, ‘I do.’ And he said, ‘They do the same thing, they wipe themselves, so they ain’t no different from you.’

Augie may maintain that Dylan, The Beatles, Willie Nelson, Roy Rogers, Jimmy Reed, Doug Sahm, etc. are no better than him, but they’re sure better than you. Go see him.