A Chance To Be A Kid Again At Hangar Tavern 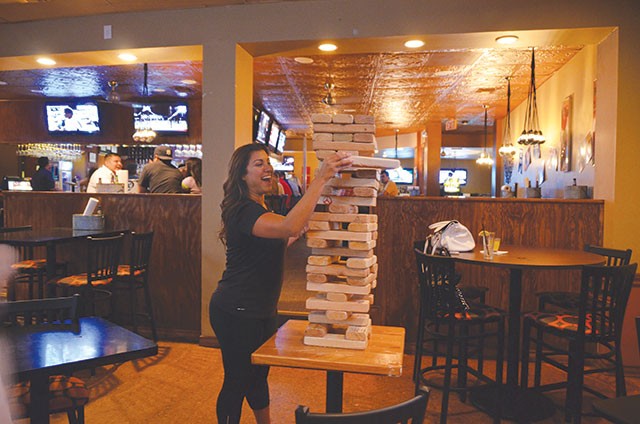 Contrary to its moniker, Hangar Tavern isn’t a spacious warehouse filled with airplane memorabilia–far from it. You can be a kid again at the Brook Hollow nook, while getting your drink on. This is neighborhood bar meets playroom.

Snuggled in the corner-most lot of the shopping center that also holds a Chinese restaurant, a UPS Store, a jeweler and a driving school, the bar is decidedly different from its sister location just a few miles south off 410 and Broadway (oh, and there’s plenty of parking).

The layout features three dimly lit rooms: enter to the right and you’ll land in the middle of an old-school arcade lined with Hot Shot basketball shooting, joystick golfing, a pool table and one of two giant Jenga sets. Think Dave & Busters without feeling like you’re getting gypped at every turn. Enter through the left and you’ll find tall bar tables and the bar lined with several flat screen TVs. The third room holds cozy couches, a projector screen and another giant Jenga set. It’s basically a man cave times three.

There are more elixirs to choose from than the usual big brands. The fully stocked bar features Texas-made liquors as well as the complete Shiner line-up, a bevy of Southern Star Brewing Company ales out of Conroe, Alamo Ale (a few more local brews would be nice) and St. Arnold’s Lawnmower and Weedwacker, all at $4. To further drive the “We Heart Texas” point home, Hangar Tavern offers Two Step Tuesdays, a shot of any Lone Star spirit and a Texas beer for $5.

The playful vibe of the bar extends past the larger-than-life Jenga sets (which people actually dare using. I didn’t stick around to see a particularly tall tower collapse, but I imagine it was loud) into the menu which offers homey classics like grilled cheese, meatloaf sandwiches and BLTs. Happy hour runs 11 a.m. to 7 p.m. followed almost immediately by reverse happy hour from 8 p.m. to 11 p.m.

Similar to after-school clubs that fill kid’s schedules with activities, the bar has a jam-packed lineup of dart tournaments, beer bingo, tastings, karaoke and ladies’ nights (filled with sugary potions such as Key Lime martinis, White Cosmos and something called a ChamBull which mixes Champagne and Red Bull for some godless reason) though it’s hard to peg down a specific demographic for Hangar Tavern. There were plenty of bros playing darts along with a handful of older patrons chatting over their Texas Two Steps and a few baseball fans watching the Rangers and the Astros do their thing.