A Chat with Sean Tillman, the Sexy Pop Beast Behind Har Mar Superstar 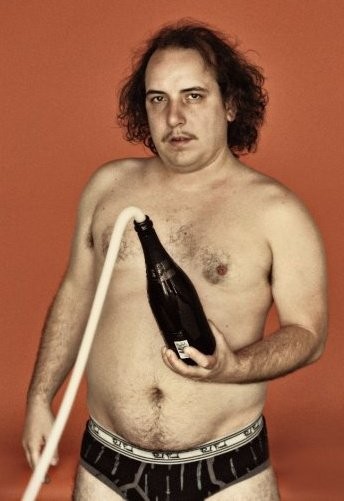 Sean Tillman, also known as soulful songbird, oozer of unbridled sexuality and R&B pop savant Har Mar Superstar, will be playing Paper Tiger Saturday, April 23. If you're unfamiliar with the Minnesotan with tunes so groovy, sultry, infectious and punishingly poppy they make Justin Timberlake look like Joey Fatone, just consider that his last time through town, Halloween, no less, Tillman and his band (two drummers and an iPod) were dressed as Violent Jay Sherman (the ICP-version of Jon Lovitz' The Critic character) and 2 Shaggy 2 Dopes – cause of the duo of drummers, ya dig? Dude stood on his head, dropped trou and just dominated the dance floor like a total and complete badass. Best show of 2015.

We recently got to speak to Tillman over the phone about his upcoming tour, emerging from the DIY scene, cultural appropriation, Sam Cooke and LA's famed Wrecking Crew of session musicians versus Muscle Shoal's Swampers.


Are you touring with a full band this time around?

Yeah, there’s seven of us onstage, like horns and everything live, yes, it’s really fun.

Has playing primarily solo or with a small backing rhythm section been a financial decision or were there other reasons for the stripped down band?

Yeah, I mean, it just sort of built up to the point where I can do the full band now. So, yeah, it was just kind of financial, logistical. A bunch of different decisions at the same time, cuz, y’know there’s certain points in touring where like, I scale it back if I’m flying out for a couple shows or whatever happens, y’know? For awhile I was just tailoring for what it needed to be but now I can afford to do the whole thing, so I’m very excited to do it.

How much of your appeal, artistically and sexually, comes from confidence?

Uhhhhhh. I don’t know, man. That’s a hard question to answer. But, I think the more confident I get, the more people seem to like it. So, I think it’s a big part. But I have no idea how much.

Are we encouraged, via the media, capitalism, etc. to be less confident, thereby making confidence a rare but ironically marketable trait?

I don’t know, man. I don’t know why more people aren’t confident … I think the job of … rock music in general is you have to be confident … I guess I don’t really sit around and think about it.

Was your sexual company ever a trophy for someone? Have you ever been a box to check off on someone’s bucket list of sexual conquests?

As many artists start out writing for what they consider their musical forebears or icons, are you ever bummed that most of the musical influences of Har Mar Superstar are deceased and you therefore cannot achieve their acceptance and respect?

No. I don’t know. I think a lot of them are still alive, too. So, I don’t really sit around and think about it. So, no.

… I wish [Sam Cooke] was still around to make music I could be inspired by. But that’s about as far as it goes for my sadness.

In the sphere of progressive American politics, people have been working towards manifesting a culture of inclusion, listening to the marginalized and accepting their accounts of life in the U.S. Do you feel that your music, particularly as it’s influenced by many black artists, aids in that progression?

I hope so. That would be the hope. I mean, I hope people just think about it as music … I think I’m thankfully doing something that is … I’m not trying to steal from a culture, I’m trying to give back to a world, y’know?

Have you ever experienced instances of people accusing you of appropriation?

I get it here and there. But it’s not anything crazy. Anybody’s gonna get it, if somebody doesn’t like me as an artist or a person there’s an obvious, like, thing you can spit at, but I don’t think I get under people’s skin that much … anymore … I’m not appropriating, like, language … I’m kinda myself through the whole thing so I’m not to worried about that, y’know?

Does access to the masses dictate what is cultural appropriation and what is authentic and real? For example, Miley Cyrus or Taylor Swift are appropriators but Har Mar Superstar is the real deal. Is that simply because of your respective statuses in pop culture?

Sure. I guess if something is more widely spread and a lot more people see it then there’s gonna be a lot more people who are gonna be mad at it. And when they see it making huge amounts of money, that sort of fuels the fire more. But I don’t think I’m in any danger of that. So … [laughing] Just doing my thing.

But, people have access and they have their opinions and they have this vacuous screen that they can type anything into that they want and they can be as mad as they want without actually giving a fuck, y’know? I think there’s a lot of that going on, and then two days later they forgot that they were even mad about it. It’s a really reactionary culture right now. People just want to have their opinion heard, which I get.

Has the vast amount of mid-level acts in the U.S. helped in building a DIY culture?

Yeah. I mean, definitely in my case, for sure. I still, like, manage myself as far as tour manage, co-tour manage everything, and I like to have my hand in the process of whatever’s happening … I like it that way, I like to have more control. So, I think growing up and playing in, like, noise bands and having to do that instilled it in me to where it’s not that hard. And, so, I might as well just, like, take on as much of that as I can because while you’re on tour there’s not that much to do.

It’s not a staunch political stance. It’s more that I just know that it’s easy and I can save money. If I hadn’t done it before it might seem like impossible and I might not try. I get that when bands pay somebody to do everything.

At this stage of your career, do you feel like your skill has been validated?

Yeah, I feel like I can do whatever I want now – which is really a nice place to be – and that people aren’t gonna question it.

Are you interested in that next level of fame? You seem to hold this sustainable position just below the surface of pop culture, like Edie Sedgwick with soul or a Neal Cassady of underground R&B.

You know, I think I’ll have a longer career than most people that do what I do will because I didn’t have that initial one hit, or something, and people are kinda watching me grow as an artist. I appear in movies and TV shows here and there. I’m just very satisfied with what’s happening and I just think it’ll be more like a fun thing to look back at my career 40 years from now and just keep doing weird shit. So, I’m into where I’m at.

I mean, I’ve always known that I was an artist’s artist … I think as the songs developed and the albums get better and better that’s changing a little bit and that’s fine. But, I’m kind of a guy who was always there, which is really fun to be, without having any of the consequences of being overblown.

Does that ever feel burdensome?

No. I mean, I could be working at a Five Guys in a college town. I’m pretty psyched where I’m at.

Tickets for the show are priced at $15 and will also feature Butcher Bear and the Blades and Neil Z.