A Commission of Renters? In San Antonio, the Debate Rages Early On 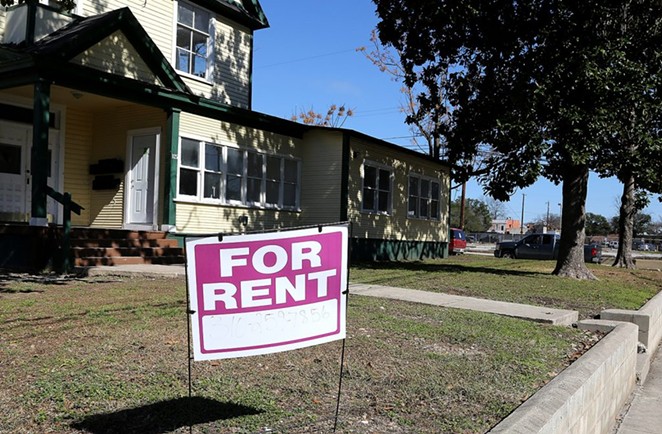 In just two weeks, the debate over whether San Antonio needs a commission composed entirely of renters, which could potentially help shape housing policy, seems to have already reached a boiling point.

The idea, which District 1 Councilman Roberto Treviño has proposed, has drawn support from housing advocates, who say renters are underrepresented in San Antonio and require their own voice, their own direct line of communication to City Council and the city’s top administrators for issues unique to them. Roughly 46% of San Antonio households rent, according to data pulled from the 2012-2016 American Community Survey by Treviño’s staff.

“Then you start to ask: What are the methods in which these folks can be represented in a way that they get to represent themselves and bring up issues and talk about some of the concerns they might have?” Treviño said last week.

On the opposite side of the argument are landlord and real estate groups, who argue a renters commission would add redundancy to the system of local government that already has the Housing Commission, a body formed and appointed by Mayor Ron Nirenberg in early 2019, among other housing-related boards.

In his request, Treviño cites Seattle’s Renters’ Commission, established in 2017, as a potential model here. Groups representing landlords here say the policies taking shape in Seattle are unfair toward landlords. For example, the Seattle Renters’ Commission is pushing the city to ban evictions during winter months.

“If we allow tenants to go without paying their rent for those months, who will pay our mortgages?” Raquel Bonds-Wright, a local real estate broker and owner of two properties, told the Housing Commission last week. “It’s unfair. If my house forecloses, (the tenants) are still going to be homeless because there will be no where for them to go.”

In 2017, Seattle passed its Fair Chance Housing law, which prevents landlords from denying housing to people with a criminal history. Another new law requires landlords to give tenants 14 days to vacate, instead of three, after serving the tenant with a notice to vacate, the first step in the eviction process.

In Texas, the law is more defined at the state level as to the rights of tenants and landlords, especially in eviction cases.

“About 90 percent (of tenants) have a decision that’s going to go against them if they tell the court, ‘Yes, I owe rent’,” Judge Roberto A. Vazquez, who presides over Justice of the Peace, Precinct 2, told the Heron late last year. “There’s nothing left hear.”

In an interview after the Housing Commission meeting, Bonds-Wright, in reference to Seattle, said she’s more concerned about renting to a sex offender than to someone with a less egregious criminal background in need of a second chance. She said she has an obligation to protect neighboring tenants at her properties who may have kids.

At two recent public meetings—the Housing Commission last week, and the council’s Governance Committee the week before—critics have asked: Given Texas’ narrowly defined property statute, and San Antonio’s many efforts to address affordability concerns, what would be the point of a renters commission?

Treviño pointed out that the city’s new right-to-counsel program, which offers an attorney to people going through the eviction process, didn’t come from the Housing Commission, but from his office. He said there are issues he and other city leaders may not be aware of that could only emanate from a body composed entirely of renters.

“Housing is very complex,” he said. “If you look at what’s going on, we are tackling it many different ways and all of those are helping. One of the things I don’t think we’ve done well enough is understanding the amount of renters that exist in our city, and how that impacts how we look at housing in San Antonio.”

Eviction policy promises to consume a large chunk of the debate. In Bexar County, there were 20,000 eviction cases filed last year, according to an extensive series by the San Antonio Express-News last month. The paper’s analysis of local court records shows a 34 percent rise in eviction lawsuits from 2011 to 2018.

“Given the fact that San Antonio has so many evictions and so much poverty, it seems to me tenants deserve an opportunity to have another voice for themselves,” Pancho Valdez, a resident of the Marie McGuire Apartments downtown, a San Antonio Housing Authority property, told the Housing Commission last week.

Some critics have suggested landlords be represented on such a commission.

It’s an idea supported by Pete Alaniz, a city housing official who currently serves as interim executive director of the San Antonio Housing Trust, a city-created nonprofit that aids in financing affordable housing.

“There has to be a balance though when it comes to deciding future policy direction, that all sides need to be looked at,” Alaniz said at the Housing Commission, on which he serves.

“It wouldn’t make sense for us to have a renters commission and it be all property owners,” he said later. “So why would it make sense to be all tenants? There needs to be a balance to that equation.”

Jessica O. Guerrero, who also serves on the Housing Commission, said she was open to including landlords on a renters commission, but said the composers of the commission should strive for equity, not equality—meaning more renters than landlords.

“It’s important to acknowledge that all of the boards and commissions that people have mentioned do include heavy and major representation by landlords and people in the industry,” said Guerrero, who helped organize the residents of the former Mission Trails mobile home park five years ago.

Treviño said he was open to discussing the merits of including landlords and property owners on a renters commission.

In its 2018 report, the Mayor’s Housing Policy Task Force stressed the need for a coordinated housing system—one that would better define and align all of the various housing boards, resources and providers—to put San Antonio in a better position to properly tackle issues of housing affordability. City officials are currently working on such a system.

The task force also recommended the city hire a chief housing officer, to oversee efforts citywide in regards to affordable housing. Two weeks ago at the Governance Committee, City Manager Erik Walsh said the job listing was posted earlier this month, and that he hopes to have the officer in place by April.

In a statement, the San Antonio Board of Realtors (SABOR) said adding another commission contradicts the recommendation of the task force.

“SABOR believes that the intended goals of a renters commission can be better served by efforts that are already underway, specifically the strategies of the San Antonio Housing Commission which was recently created to address the concerns of all types of housing interests, including those of renters,” said Kim Bragman, SABOR’s 2020 chairman.

At the council’s Governance Committee two weeks ago, Houston asked that the city be given the opportunity to explore how a renters commission would fit into the gestating coordinated housing system—would it be its own commission, or would it be a subcommittee of the Housing Commission, which Nirenberg formed to tackle all housing issues? They want to deliver their recommendation for the new coordinated housing system to the City Council for consideration in June. But some council members, spearheaded by Treviño, suggested the council, through its own process of committees, take the lead in figuring out where to put such a commission, as well as other questions related to its formation such as who would serve and how they would be appointed.

The next discussion will take place at an upcoming meeting of the Culture and Neighborhood Services Committee, which Treviño chairs—though it has not been scheduled. Ultimately, committee would advance the concept of a renters commission to the full City Council for approval.

Setting It Straight: Because of incomplete information provided to the Heron, an early version of this article misattributed the statement from the San Antonio Board of Realtors.