A Cross-Border Look At Vigilante Groups In 'Cartel Land' 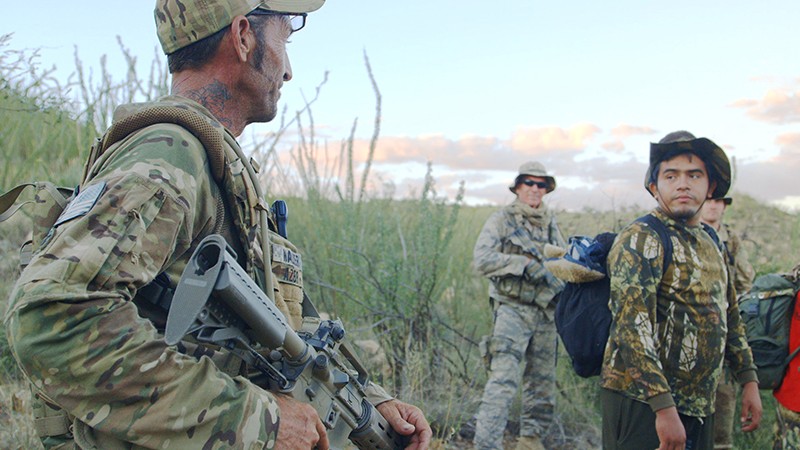 Beyond the usual genre themes of heroism and sacrifice, the greatest war films tend to project a sense of an intractable and ultimately unwinnable situation. Whether it be WWI in All Quiet on the Western Front or WWII in They Were Expendable or the Korean War in The Steel Helmet or the Vietnam War in Apocalypse Now (or more recently, the "War on Terror" in The Hurt Locker and American Sniper), you get a sense that for all of the bravery they show in battle and duty, the characters in these films are trapped in an unresolvable conflict. No one wins a war — battles are won, but the war never ends.

Matthew Heineman's enthralling and upsetting documentary Cartel Land, while not technically a war film in any militaristic sense (if anything, armies here are notable for their absence and impotence), has a lot in common with those aforementioned war movie classics. Rather than focusing on faraway wars, Cartel Land looks at the brutal and bloody violence being waged right on America's doorstep by the Mexican drug and human trafficking cartels and especially at the armed vigilante movements that have sprung up on both sides of the border in retaliation.

The movie was executive produced by Kathryn Bigelow and it's no surprise that she got behind it — Cartel Land has all of the intensity and electricity of her films The Hurt Locker and Zero Dark Thirty, yet it consistently remains a level-headed and almost unbelievably intimate piece of cinematic journalism. Heineman and his crew waste no time risking their necks; the film opens by showing the cartels' "#1 meth cooks" making an illicit outdoor cook while carrying guns and wearing masks. Disturbingly, the meth cooks are some of the more pragmatic and purposeful people we will meet in the film.

They're making drugs for the cartels that will be trafficked across the border and sold in America, while the profits get funneled back to Mexico to fund greater and greater crimes. All the while, poor Mexicans are inextricably caught in the crossfire. In the state of Michoacán, the extortion and violence became so commonplace and so savage (we hear stories of babies being smashed over rocks), that an armed movement – Autodefensas – arose. A terrible solution, to be certain, but with the Mexican government firmly in the pocket of the cartels, it may be the only solution with a chance to work.

Autodefensas is led by Dr. José Mireles, a white-haired and folksy-looking ex-physician whose group arms citizens and coaches them in urban warfare. Mireles becomes the symbol of the movement, gaining a level of nationwide notoriety, but he's really a symbol for the vicious cycle of corruption that catches everyone in its blades. He begins the film as a peasant revolutionary and ends it as just another sleazy politician on the run — nobody here is left untouched by violence and corruption, even those sworn to stop it.

On the other side of the border, another type of armed anti-government group patrols the line between Mexico and Arizona, a favorite avenue for traffickers. "This area has been ceded to the cartels," says military veteran and ex-meth addict Tim "Nailer" Foley, leader of the militia group Arizona Border Recon. As the violence intensifies and the mainstream media starts riding the story, Foley finally receives the volunteer manpower he has long desired, but finds that a group built around harassing dark-skinned people may appeal to the wrong kind of patriot.

Both Autodefensas and Arizona Border Recon face the same issue — the lawlessness of vigilantism, no matter how effective in the short term, is especially attractive to lawless men. Not everyone is keen on a bunch of self-righteous, self-appointed lawmen patrolling downtown with machine guns. The more that Autodefensas eradicates the cartels, the more they simply become the cartels, growing even more dangerous when they're "legalized" by the Mexican government.

Through it all, Heineman and his crew capture everything, gaining a terrifying level of access and giving us front-row seats to the drug war. They ride along with Autodefensas on their urban clearance missions, follow Mireles from his family vacations to his extramarital trysts, shove their cameras into the center of machine gun battles, and in probably the most disturbing sequence, go inside of an Abu Ghraib-like torture facility set up by Autodefensas and run by ex-cartel members.

And still the cooks keep cooking and Americans keep consuming. Even as Foley, in a rare moment of optimism, argues that "cycles can change," the #1 meth cook expresses a different opinion: "You can't stop the cartels."