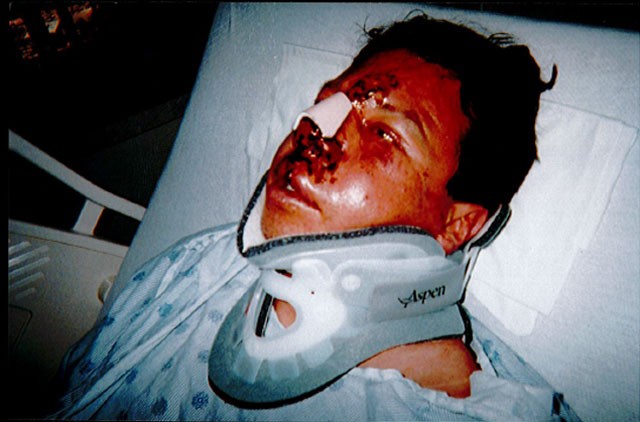 A police report says Diego Martinez was swerving and switching lanes without a signal when San Antonio Police Officer R. McDaniel pulled him over just after 2 a.m. on March 5, 2011 near I 410 and Culebra. According McDaniel's incident report, Martinez “was slumped to the left without his seatbelt on” when the vehicle came to a stop.

What happened next is now the subject of a lawsuit alleging police brutality.

McDaniel's report claims Martinez and his girlfriend passenger both exhibited bloodshot eyes, slurred speech, and were confused when he approached the vehicle. Both, McDaniel writes in his report, stepped out of the car when he went back to his cruiser to run an ID check.

McDaniel writes that he tased Martinez in the back when he refused the officer's commands.

“I hand cuffed the driver and pulled him from the [west bound] traffic lane where he fell,” McDaniel writes. “Driver was bleeding from a lacerated upper lip and nose where he fell on the asphalt.”

A lawsuit filed in federal court last week claims Martinez's injuries came not from a fall to the ground, but from when McDaniel “mercilessly beat” Martinez on the side of the road. The lawsuit claims McDaniel beat Martinez with his fists, a baton, and kicked him “throughout his face and body.” When Martinez's girlfriend began to cry, asking that McDaniel call other officers out to the scene, he told her to “shut the fuck up,” handcuffed her, and charged her with public intoxication, according to the lawsuit.

Martinez was charged with drunk driving and resisting arrest. When his girlfriend tracked him down at University Hospital three days after the arrest, doctors mistakenly said Martinez had been “admitted because he was hit by a motorcycle,” and was in serious condition. McDaniel, the lawsuit charges, “knocked out all of [Martinez's] teeth.” Martinez also suffered “nasal fractures, trauma to his chest and abdomen, swelling in his brain, and numerous bruises and lacerations to his head, chest, abdomen, and extremities.”

The lawsuit names as defendants McDaniel and the City of San Antonio. "The incident was fully investigated by the police department and the officer acted appropriately,” said City Attorney Michael Bernard. “The lawsuit is without merit." When asked whether McDaniel was still on the force or if he had a disciplinary history with the department, an SAPD spokesman told the Current the officer name and badge number, which McDaniel wrote on his police report no less than four times, does not match internal SAPD records. SAPD had yet to explain the discrepancy as of press deadline Monday.

While the police report claims Martinez was injured during a fall, his attorney Christopher Gale provided the Current a letter by John Moore, a local cosmetic dentist who wrote, “In 30 years of practice and tens of thousands of patients I have never seen this much dental, skeletal, and soft tissue damage occur in single fall to the ground.” Martinez's injuries “required an impact far beyond a fall to the pavement,” Moore wrote.

“It is in my opinion impossible for Diego Martinez to have sustained this much damage in a simple fall and the injuries were more consistent with multiple impacts to the nose and mouth.”