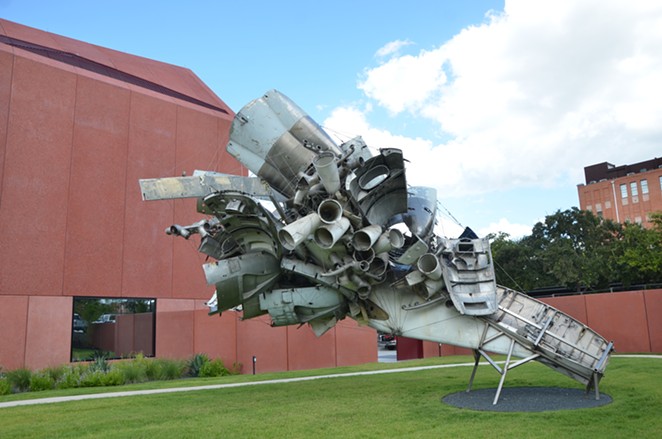 If the idea of taking dreams seriously sounds whimsical, consider for a moment the iconic works and revolutionary ideas that came to their creators in dreams: Mary Shelley’s Frankenstein. Salvador Dalí’s The Persistence of Memory. The melody for the Beatles’ song “Yesterday.” The periodic table. The sewing machine. The double-helix structure of DNA. The list goes on.

San Antonio artist, collector and philanthropist Linda Pace, who died in 2007, took her dreams to heart. Chronicled in her 2003 memoir Dreaming Red: Creating ArtPace, Pace experienced “dreams that were so real, so luminous and sometimes so frightening that they startled [her] into seeing glimpses of [her] true identity.” Dreams helped her decide to divorce her husband Christopher “Kit” Goldsbury in 1987 and reclaim her passion for making art. And dreams inspired her to write the script for her second chapter, one that led her to establish Artpace, an esteemed residency program that earned San Antonio a spot on the global art map, and the Linda Pace Foundation, which maintains and showcases her personal collection of contemporary art.

Around 2004, Pace started envisioning a contemporary art center that would house that growing collection. When she pitched this idea to then-rising London architect David Adjaye in 2006, he agreed to bring her vision to life. The following year, Pace was diagnosed with breast cancer and eventually had “an absolutely incredible dream” about a shimmering “ruby city.”

Pace sketched the fantastical complex and shared the drawings with Adjaye less than two months before she died. Now a knighted architect who earned great acclaim for his design for Washington DC’s Smithsonian National Museum of African American History and Culture, Adjaye recently told the Wall Street Journal that Pace had asked him to “Please, please make this building happen.” Funded by an endowment Pace left her foundation, Ruby City finally became a reality this year through a partnership between Adjaye Associates and Alamo Architects. While it’s far from the sketches Pace supplied, the two-story, 14,000-square-foot interpretation boasts a dreamlike quality of its own with origami-esque peaks and deep red exterior panels composed of precast concrete and crushed glass.

Thanks in no small part to Adjaye’s involvement, Ruby City has created a media buzz that extends beyond San Antonio. It’s been featured in Architectural Digest four times and landed on Time magazine’s list of the World’s Greatest Places in August — months before its October 13 public opening.

While a $16 million landmark designed by a knighted starchitect might make for great press, equally noteworthy is the thoughtful collection it showcases. In keeping with the local-meets-global equation Pace championed at Artpace, Ruby City holds San Antonio and Texas artists in the same high regard as the international art stars represented in its collection.

“I think that it’s a great achievement of the Linda Pace Foundation board to bring this space into realization,” said Patricia Ruiz-Healy, founder and director of San Antonio gallery Ruiz-Healy Art. “The fact that Linda Pace envisioned it and had meetings with the architect David Adjaye validates everything. Besides being a passionate contemporary art collector, Linda was an activist for contemporary art practices and for the inclusion of San Antonio and Texas artists to be part of the bigger art world.” 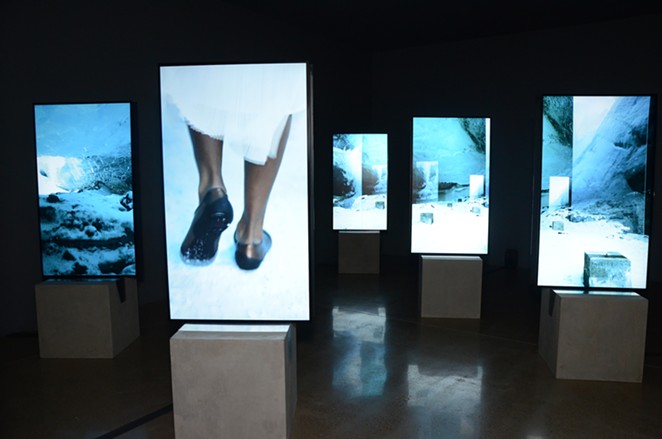 Local artist Bill FitzGibbons, who taught Pace sculpture at the bygone San Antonio Art Institute on the grounds of the McNay Art Museum, sees Ruby City’s draw from the inside out.

“Ruby City is one of the most important architectural treasures in Texas,” he said. “Linda’s collection includes former Artpace residents, some who have become MacArthur Fellows as well as several that have been represented in the Venice Biennale. Exhibitions and events at Ruby City should attract curators, collectors and artists from around the world.”


Portrait of the Artist

While it represents only a fraction of the Linda Pace Foundation’s collection — which comprises more than 900 pieces and continues to grow through the acquisition of work that “reflects Linda’s sensibility of a feminist perspective, engages social issues and considers aspects of spirituality and beauty” — Ruby City’s inaugural exhibition “Waking Dream” presents a fascinating cross-section curator Kathryn Kanjo likens to a “portrait of Linda Pace, both as a collector and as an artist.”

Encompassing 40-plus works united by themes ranging from vulnerability and resilience to the creative self and notions of home, Ruby City welcomes visitors into its “Waking Dream” with a powerful, poppy, playful punch delivered by Pace’s 2001 assemblage Red Project. Upon noticing the recurrence of red in her dreams in 1997, Pace started collecting mass-produced red items from “dollar stores, botánicas and flea markets all over the world.” When the members of the Jungian dream group she belonged to were tasked to make something using imagery from their dreams, Pace started assembling the first building block of her Red Project, which includes 16 joined panels swimming in ruby slippers, boxing gloves, religious statues, Teletubbies, the Rolling Stones’ “Tongue and Lips” logo, Elmo, rubber snakes, a patch embroidered with the Pace Foods logo, a vagina candle, a voodoo doll, Buddhas, beads, boas and plenty in between. Almost too much to absorb in one viewing, Red Project is one of those rare pieces that seems to disclose a new secret every time you see it.

Upstairs in the main galleries, a few unmistakable San Antonio scenes emerge, including Ana Fernandez’s recently acquired 2017 painting Los Valles, which depicts a colorful fruit-cup stand illuminated under the ominous glow of florescent lights, and an amusing meta moment in the form of Cruz Ortiz’s painted portrait of fellow Ruby City artist Jesse Amado. With its blue palette rendered in artificial flowers, Pace’s poignant 2006 text piece Stay is likely to become the backdrop for many selfies to come.

But it’s perhaps what Head of Collections & Communications Kelly O’Connor characterized as “experiential works” that will transport Ruby City visitors into waking dreams of their own.

Standing tallest among those is New York-based Serbian performance artist Marina Abramovic’s towering iron sculpture Chair for a Man and His Spirit. For this particular piece, Abramovic — who famously spent 716 hours staring down 1,000-plus strangers who participated in her 2010 Museum of Modern Art retrospective “The Artist Is Present” — gives viewers specific instructions to experience the work. “Sit on the lower chair,” she writes. “Look at the wall in front of you. Motionless. Depart.” While these instructions are followed, the titular spirit is purportedly perched on the upper chair, which stretches more than 16 feet off the ground. In an email, Kanjo identified Abramovic’s piece as one that feels “particularly transformed” by Ruby City’s architecture. 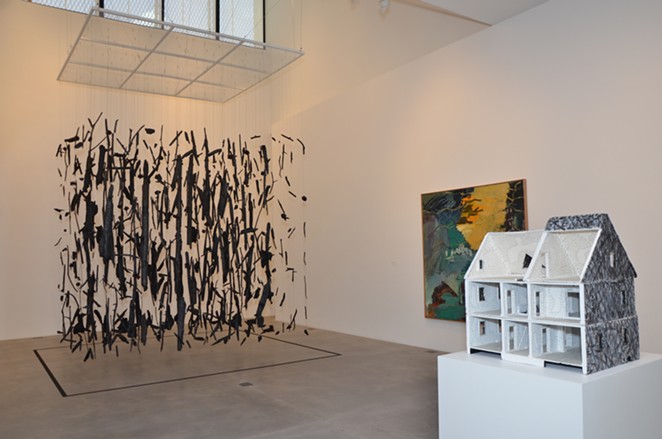 “Visitors first see it at a distance, as they enter the gallery: its exaggerated height is framed by the soaring wall and lit from above,” Kanjo said.
Offering an equally surreal interpretation of domestic comforts, Korean innovator Do Ho Suh’s polyester and stainless steel 2016 structure Hub, 3rd Floor, Union Wharf, 23 Wenlock Road, London N1 7ST, UK invites viewers into a translucent lavender recreation of a vestibule in the artist’s London apartment building. Of particular interest in this delicate, hand-sewn passageway are human-scale details such as door hinges, a fire exit and evacuation warning signs, even buttons to call the elevator.

As an Artpace resident in 1997, British artist Cornelia Parker created the sculptural installation Mass (Colder Darker Matter) from the remains of a church in Lytle that burned down after a lightning strike. That mobile-like piece earned her a coveted Turner Prize nomination and also informed visually similar works to come, including Ruby City’s Heart of Darkness. First assembled in 2004 from the charred remnants of a Florida wildfire, it might suggest a black-and-white abstract painting from afar but comes to life as you approach it, swaying gently and revealing organic textures and blackened pinecones.

A fellow Artpace resident who also earned a Turner Prize nomination with work created in San Antonio — the 1999 film The Long Road to Mazatlán — Isaac Julien held a special place in Pace’s heart, evidenced by an enduring friendship and admiration that led to her foundation preserving the world’s largest collection of his work. Presented in a theater-like gallery dedicated to Julien’s immersive, multichannel film installations, 2014’s Playtime employs capital as a thematic thread connecting vignettes in London, Reykjavik and Dubai. Based loosely on French director Jacques Tati’s 1967 comedy of the same name, it plays out on three screens simultaneously, pairing meditative landscapes and charged exchanges while artfully blurring lines between documentary and narrative. Although James Franco, who portrays a smarmy art dealer, often gets top billing in Playtime summaries, eccentric Swiss auctioneer Simon de Pury steals the show by simply playing himself. If you don’t have 64 minutes to spare, don’t let that keep you from sitting for a spell to get a glimpse of Julien’s distinct approach to storytelling.

Taken as a whole, “Waking Dream” isn’t necessarily a crowd-pleaser or an easy read. Instead it’s provocative, pensive, otherworldly and, at times, dark.

“Pace’s collection reflects some of the most influential approaches in contemporary art,” said Chad Dawkins, curator and director of exhibitions at Southwest School of Art.” [It reflects] many Artpace resident artists, and it should be known by San Antonio’s art community.”

Those who have set aside several hours to experience Ruby City in its entirety should save time for a stroll around the sculpture garden, where the building’s architecture is on full display and native Texan and Artpace alum Nancy Rubins’ descriptively titled 5,500 lbs. of Sonny’s Airplane Parts, Linda’s Place, 550 lbs. of Tire-Wire is poised for a post-apocalyptic photo op.

Across Camp Street in the Linda Pace Foundation’s Chris Park, named after Pace’s late son Chris Goldsbury, Ruby City’s Auxiliary Gallery Studio complements “Waking Dream” with the tightly curated “Jewels in the Concrete.” Titled after imagery from one of Pace’s dreams, the exhibition offers its own variety of dreamlike reflections, exemplified by Julien’s ambitious 2015 project Stones Against Diamonds. That piece is set against the dramatic backdrop of Icelandic ice caves and presented on five portrait monitors backed with mirrors. Pace’s 2006 sculpture Mirror Mirror offers a mirrored igloo that visitors can crawl inside to take a surreal look at themselves.