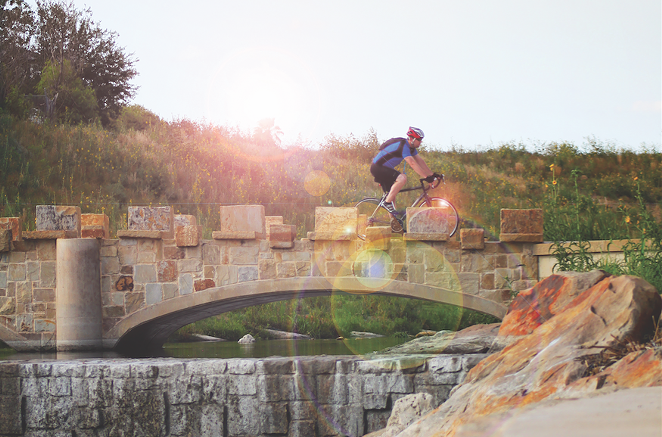 All that buzz about urban redevelopment, the Decade of Downtown and reviving San Antonio’s urban core usually skips over a key selling point: The area is ridiculously bikeable. Biking is (and hopefully, will remain) the hands-down best way to move in and around San Antonio, so expect more of us who live, work or play down here to travel to and from work, run errands, or head out at night on two feet-powered wheels. While navigating the traffic far outside the city center remains risky, the streets in and around downtown sport ever-increasing bike and share lanes. So ride defensively and often (and with a helmet, we’re obliged to say). Because even if you wind up dirty, sweaty, and smelling like the receiving end of a VIA bus tailpipe at the end of it, touring SA’s city center is truly best on bike.

EAST SIDE
The revived Hays Street Bridge is not only the best perch from which to view downtown’s urban landscape, but it’s also become a mecca of sorts for SA cyclists. Closed in 1982 and slated for demolition by 1994, preservationists helped save Hays and re-open it in 2010, and now the bridge connects downtown to the city’s booming east side.

The bridge is also the prime kick-off point for a leisurely afternoon ride around the eastern edge of downtown. You can fill/booze up at the nearby Big Hops Growler Station, Burleson Yard Beer Garden, or Alamo Brewery (which is right underneath the bridge) or pack a bag to eat and booze it up on the deck. From Hays, you can cross the bridge east and explore the fast-changing Dignowity Hill neighborhood before heading south on Palmetto to peruse a handful fascinating east side cemeteries. Heading west on Commerce will loop you right back around into downtown proper.

PEARL/MUSEUM REACH
The Pearl, within biking distance of virtually anywhere downtown, is a good start for any weekend ride. You can grab breakfast or java ahead of a morning ride (Bakery Lorraine or Local Coffee), do lunch before or after a long stroll (Cured or The Granary ‘Cue & Brew for meat eaters, Green for the veggie-lovers) or a simple midday snack break (uh, ceviche at La Gloria, please).

From the Pearl, hop a block over to Josephine Street to catch the Museum Reach bike path, where, after winding through a golf course, you’ll be spit right out at the south end of Brackenridge Park. Grab a book from the nearby Half Price Books and find a spot to read in serene Brackenridge before biking back downtown.

WEST SIDE
We call this the “bomb-ass public art ride.” One preferred route, starting from downtown, is to head west on Martin Street (probably best during the day, since you’ll be biking past the Bexar County jail and the Haven for Hope homeless shelter), before heading south on Colorado until you hit the inimitable Guadalupe Street corridor, where the venerable west side institution San Anto Cultural Arts has commissioned and catalogued dozens of murals on the sides of apartments, schools, and local businesses. Contact San Anto Cultural Arts for a list of locations, or see if you can hook up with one of the organization’s Saturday morning mural bike tours.

SOUTHTOWN / MISSION REACH
So much has grown up around Southtown/King William in recent years, that roaming the area is almost self-explanatory. But in case you need help, here are some staples that are always stocked with really, really good beer: the Filling Station Tap Room, The Friendly Spot, or the Blue Star Brewery. From Blue Star, you can head straight out onto the newly expanded Mission Reach. Take the path down for miles along the river, or detour at any of the marked stops to see all the Spanish Colonial Missions — all, that is, except the Mission de San Antonio de Valero.

CRITICAL MASS
Bike downtown on any given night of the week, and chances are you’ll find some social ride gathered outside of a cool, old building – like the San Fernando Cathedral at Main Plaza, a common meet-up spot. And on the last Friday of every month at 9 p.m., you’ll see hundreds of cyclists all over town converged on the doorstep of the Alamo before they ride out into the city. When well attended, the ride resembles a true Critical Mass-like event – although people here hate calling it that for some reason, likely because, much like San Antonio itself, it’s probably one of the nicest, cheeriest, least-aggressive mass rides out there. Each month, the route is undetermined (or at least unannounced), so come prepared for what could be a long ride. Also, the crew takes several pit stops in parks or parking lots along the way, so BYOB.

And if you’re into social rides, one good way to keep on top of the packed, ever-changing calendar of bike meet-ups is to check in with local bike shops such as Bottom Bracket Bicycle Shop (1802 S. Flores St., facebook.com/bottombracketbicycleshop) that regularly host and promote them.