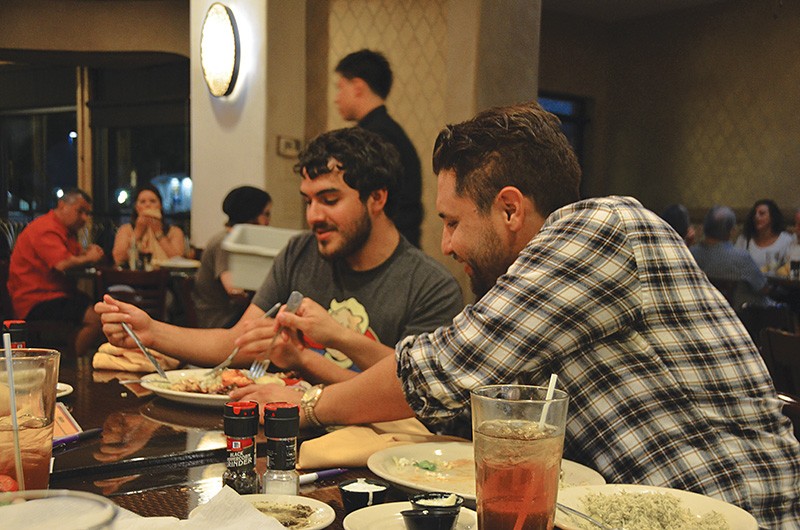 On the evening of November 13, 2014, five strangers met for dinner at the Tuk Tuk Taproom. In what has since become a monthly tradition, the Reddit Foodie Meetup of San Antonio was founded that night. Michelle Young and Davin Cross are professional millennials in their early 30s. Transplants to San Antonio, they're looking to explore culinary options their new city has to offer.

A few weeks prior to the Tuk Tuk Taproom get-together, a hungry and eager Young took to her favorite site, Reddit, and posted an inquiry in the San Antonio subreddit. She asked if anyone would be interested in starting a monthly food group. The idea was to try a new restaurant and a new cuisine in the San Antonio area once a month.

Young, at the time, was a cobbler in Alamo Heights who moved there two and a half years ago with her husband. A self-described foodie, she was desperate to explore her new city's food scene.

When she posted about starting a monthly Reddit Foodie Meetup, Cross saw it on his computer in his Stone Oak home and rejoiced in excitement at the prospects of such an endeavor. Cross, an IT professional and foodie, came to San Antonio from New York City by way of Miami. He was looking to also probe the San Antonio food scene for any and all hidden gems.

He responded to Young in a private message and asked to help organize the first meet-up. The two, along with another fellow Redditor, Arshaad, came up with the idea to hold it every second or third Thursday of the month — thinking it'd be a good day to get seated without having to wait too long.

Young and Cross came up with a system to pick which restaurants to visit. It was simple but ingenious. Each attendee writes down the name of a restaurant or cuisine on a Post-it note. The note is then folded and placed into a velvet pouch and shaken. A volunteer picks one out and that's the selection for the following month's visit.

Each attendee pays for his/her own tab. The nights have gone on to include board games and an after-party bar meet-up.

The criteria for restaurants is fairly simple: no chains!

The attendance at the first meet up was a bit underwhelming to say the least. Only five people, including the founding three, showed up. Perhaps the cold weather that night kept people from leaving their homes. Perhaps the demand Young and Cross believed existed was no more reality than unicorns or half fly, half Jeff Goldblum sci-fi monster.

However, the December event proved their theory correct, and the number of people who attended the Two Bros BBQ Market meet-up doubled to 10.

Group members have gone to La Tuna in Southtown, Cured at the Pearl and most recently, Fujiya Japanese Garden in the Medical Center. Each meet-up is larger than the next with no signs of slowing down. The April meet-up targeted Pasha Mediterranean Grill. The May visit will have group headed to Fratello's off Broadway for honest Italian fare.

The group brings together folks who under normal circumstances would likely never interact with one another. But because of their love for cuisine, these foodie redditors have been able to make lasting friendships and bonds that go beyond culinary trends.

What began as the desire of two people to expand their foodie horizons has turned into something better than either could have imagined. The continued growth of the group has sparked talk of expanding meet-ups to twice a month.

With SA currently experiencing a culinary renaissance, it seems that the group is not bound to run out of new and varying options any time soon.