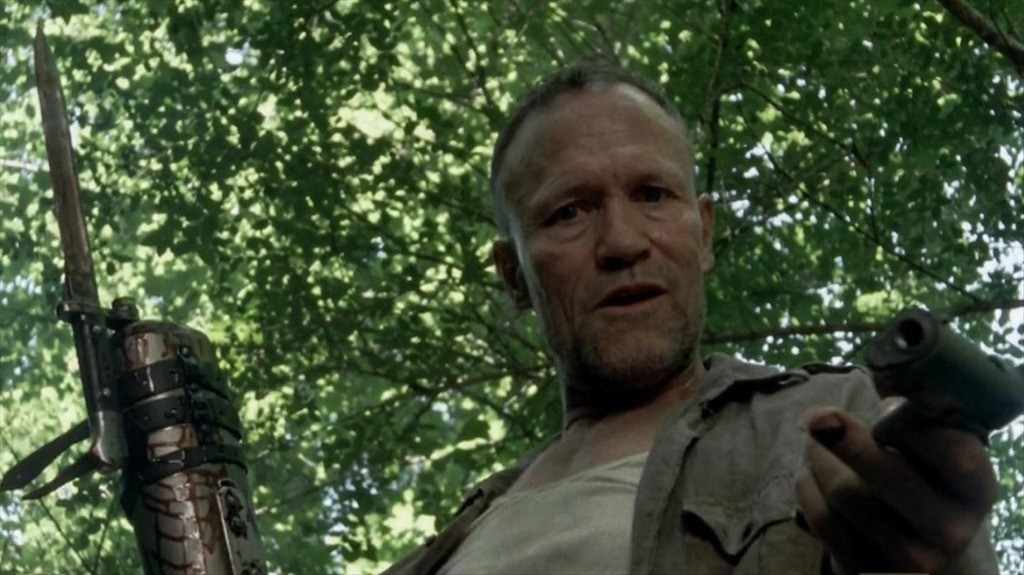 Not enough Merle Dixon in this week’s Current interview with Michael Rooker? Ask no more: in honor of his upcoming appearance at Wizard World San Antonio Comic-Con, in town August 1-3, we dig in deep with Rooker about his most famous role.

One of the most interesting things about Merle is the deep fan reaction he elicited. What do you think it was about Merle Dixon, who is definitely not the nicest guy in the world, that made people love him so much?

I think Merle had a little bit of everybody in him. All of us can be not the nicest people in the world, but we all have this inner core when it comes to family that everybody can relate to, and we all wanna think that we would pay the ultimate price for one of our loved ones. That struck a real chord, and I think because of that this character has become even more popular after his death than he was during his life on The Walking Dead. I notice it in the Comic-Cons, and on the street, and in places like the ArcLight Theater. I was walking down the street, and a lady who does the caramel corn came out from working just to stop me and ask if she could give me a hug. I said, “Of course!” And she almost started weeping. She gave me a hug, and then asked,  “Can I give you something?” She took me back inside and gave me the freshest caramel corn she had finished making — I tell you, that stuff would just melt in your mouth.

Well, thanks for making me hungry. I bet you made her day.

She was a sweetheart, and that corn was just the best. I don’t know what the magic is that goes into that stuff. I’m going to tweet her photo today. You know, she was afraid that if she took a photo with me she would get fired, because some businesses don’t like their employees to stop people like that, but she did. And she didn’t ask for the photo — I did. I’m gonna put it on my Twitter and she can hop on there and snag it.

She’s going to love that! So Merle Dixon has been a big hit with the fans, clearly.

He has indeed. The fan reaction is through the roof.

Obviously, with that amount of emotional investment, fans weren’t thrilled with Merle’s death, even though he does get the most awesome exit scene we’ve seen so far. Now, narratively speaking, sometimes characters have to die — their arc has run its course, and keeping the character going just weakens the impact. In your opinion, was that the case with Merle? Did he have to die, narratively speaking, or was there more to him that we could have seen?

There was way more. Way way way more. I totally disagree with the killing off of Merle, but I also had a lot to say about how I went out. I had several meetings with the writers. For example, that whole beat-down before the Governor grabbed me was to soften Merle up, because we all know there is no way the Governor could ever beat Merle up in a fight. So, I told them, you’ve got to have the beat-down before the Governor grabs Merle. One thing I will clear up — the line Merle says, “I’m not gonna beg you for nothing” — is not to the governor.

So glad you brought that up. To me, one of the best moments of the show was hearing that line out of Merle’s mouth again. We heard it the first time on the rooftop at the beginning of “Tell it to the Frogs,”(Season 1, Ep. 3) when he is frightened and asking God for help —but then he changes his mind and shouts to God that he’s not going to beg him for anything. Forget begging for a miracle when there’s a perfectly good hacksaw nearby (which he uses, famously, to cut off his hand to escape the roof). To me, that is Merle’s life story: fear and vulnerability, and then defiance in the face of that fear.

That was exactly what it was for — it was directed toward God, no one else. Not the Governor, not anyone. He knew he was finished, and there was no way he was gonna get out of this. So at that moment in time, he’s talking to his Maker. He’s still not gonna beg, even at that final moment. And you know, I threw that in. It wasn’t in the script. I threw that in because I knew what I wanted to do, but I hadn’t told anyone. I was trying to find the right moment to lay it out there, which was right before my death, and that was pure and simple ad-libbing. It was really cool that I had the opportunity to do it.

That’s beyond really cool — that’s perfect symmetry. Now, in the episode “This Sorrowful Life,” (Season 3, Ep. 15) before Merle goes for his last ride to ambush the Governor’s camp, he has a conversation with Rick in which he says, “I don’t know why I do the things I do. Never did. I’m a damn mystery to me.”

In the Atlantic’s Walking Dead roundtable analysis of that episode, Scott Meslow wrote that that line was “a sign of slipshod, inconsistent writing,” that “Merle was a damn mystery to all of us because his character never really made any sense,” and that the backstory we did get about Merle “felt like the writers trying to wallpaper over the fact that they never really understood why Merle was Merle.”

I fundamentally disagree with this assessment, but who better to ask than the man behind Merle himself? Was that lazy writing that ultimately failed to explain Merle, or was it spot-on character assessment?

I don’t think Merle was trying to rationalize anything with Rick. I think Merle was in fact laying it on Rick — does Rick know exactly what he’s doing? And Merle does that by making an example of himself.

From Merle’s perspective, this cop has no idea what he’s doing. The decisions that he’s made have put the entire group at risk, and yes, he’s brought them through some interesting situations. But really, as Merle, I’m saying, “Think about it. You’re willing to give this girl up for that piece of shit Governor? This is your cop out, not my cop out, my friend.” My plans start rolling in my head, and I ask Carol for whiskey for drinking, but I’m also figuring out what my plans are. I’m already thinking about what I’m gonna do, how I’m gonna use myself as bait for the walkers to follow me, sort of a Pied Piper situation. And that specific line — who in their life really knows why they do the things they do? I think it’s a very honest phrase that throws responsibility onto Rick.

You mentioned the rooftop scene, and I think you should tell people to go watch the rooftop scene again. A lot of those digs to other characters are Merle’s only way of getting back, of striking back. All he can do is try to find the niche in the armor and dig, dig, dig. That’s what Merle does. He finds the weak spot, and he digs until you can’t take it anymore, and that’s what he’s doing there.

You’re talking here about Merle’s racist aggression towards T-Dogg, and his comments to Andrea and the others immediately before and after Rick chains him to the pipe in “Guts” (Season 1, Ep. 2). I remember thinking at the time that he meant those things to a point, but that he was also just trying to see what reaction he could provoke.

Right. Definitely Merle was raised a certain way, so his sexism and racism is embedded in his upbringing, but you know, it did not matter one bit who ultimately came on top of that rooftop and told him to stop shooting. It did not matter if the person was red, green, yellow, purple or brown. They were about to get a full double barrel load of Merle Dixon. That’s a fact, Jack. And I want you to make sure people realize that Merle Dixon cannot swing the first punch. All he can do is try to get their goat and try to get back at them in some way.

So when he’s up on that roof, for the other members of the group to listen to this stranger (Rick Grimes, who takes Merle’s gun, deals a couple of punches, and leaves Merle cuffed to a pipe on the rooftop until his conscience and Darryl compel him to return) who’s not been a part of the group, who, you know what, is no longer a cop — the world has ended, buddy, you aren’t a cop any more, we don’t have to listen to you, okay? — and for them to kowtow, to literally kowtow and listen to this guy and let him handcuff his group member like that, no matter who he is — at first, Merle is all high, he’s back to his verbally inflicting ways. But when they don’t unhook him, it really hurts his feelings, and he’s affected.

You say that Merle cannot swing the first punch, and I think we see clearly the amount of hurt and vulnerability that Merle covers with a thick layer of that Dixon charm. So, in closing, I have to ask — do you think Merle ever regretted treating his brother Darryl that way?

I think the reason for that was always to make Darryl stronger, to make him able to take any kind of punishment, verbally or physically. We learn that Merle’s already been made to take a lot of punishment by the dad, they were both abused by their father. So we know that Merle’s back is just as marked up as Darryl’s back. He’s got to protect him somehow, he’s got to make him tougher. It’s that older brother thing, you know?

Which older brother thing is that?

I can kick your ass, but nobody else had better.