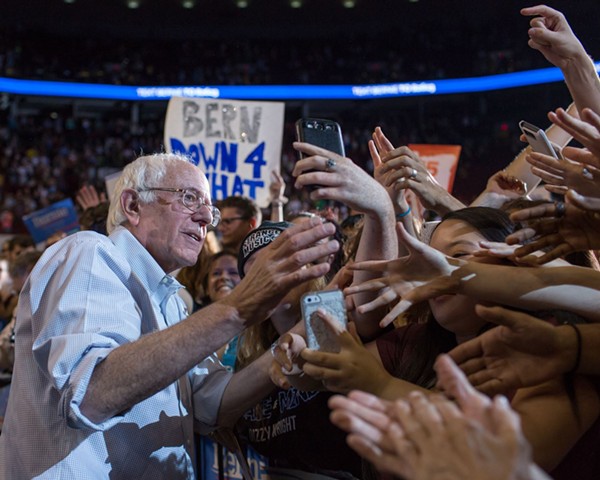 San Antonio is feeling the Bern.

The Vermont senator is still polling way behind Hillary Clinton in the race for the Democratic Party nomination, but don’t even try to tell the 73-year-old maverick or his supporters that they’re just wasting time.

In fact, it’s Sanders’ visit to Texas last month that has apparently energized and emboldened the outspoken candidate. By far the most leftist of all mainstream politicians running for president, Sanders stepped into a Republican minefield in the Lone Star State with not a care about whether the move could hurt his campaign.

The result? He drew the largest crowds of any candidate so far, to the tune of 5,200 in Houston and 8,000 in Dallas. That was the day after a stop in Phoenix that attracted 11,300. His most recent campaign rallies in Portland and Los Angeles drew an estimated 28,000 and 27,000 respectively. 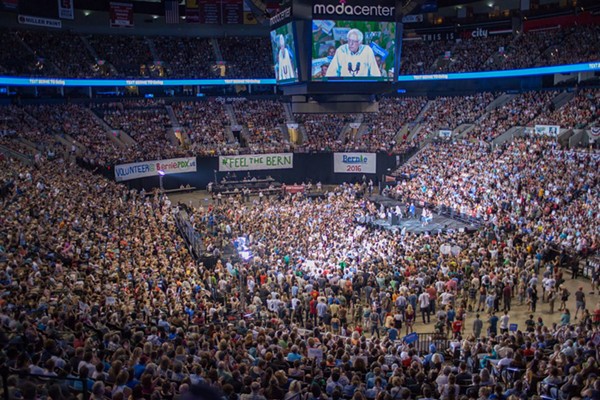 All those people – young, middle-aged and old – wanting to hear a self-identified socialist spew a leftist analysis of U.S. malaise not heard in Democratic circles since Bill Clinton took the party to the center in the 1990s.

Still dismissed as a sideline blip bound at most to make things interesting for Hillary Clinton, Sanders is confident he can win the nomination. Just like he’s confident Texas could actually fall out of its decades-old GOP stranglehold.

Sanders actually made his first Texas stop as a candidate in Austin in April, shortly after declaring his candidacy. Rick Treviño, a hardcore Democrat growingly disillusioned with his party, drove up from San Antonio to see for himself what Sanders was all about.

Returning home, he noticed there wasn’t a local Sanders campaign effort. So he took it upon himself to start it. He set up a Facebook page and began making calls. Then he organized the first house party in late June – around 80 people showed up. Treviño was convinced he was onto something.

Buzz started building up and a fledgling grassroots effort began taking shape. Two weeks ago, when the Sanders campaign put on a national virtual town hall, SA 4 Sanders organized seven house parties in the San Antonio area to watch the livestreamed speech. In all, more than 300 people participated, Treviño said.

It’s what Democrats used to be all about and why Sanders and not Hillary is the right person at the right time, Treviño pointed out.

“America is in crisis, dude,” he said. “Bernie is the real deal, the last chance to get someone in the White House that actually speaks for the people.”

Party leaders don’t want Sanders to stir things up because it’ll create problems for Hillary, who’s accused of selling out to corporate interests.

“Yo, the Democratic establishment wants us to believe that Bernie can’t win and that’s bullshit,” fumed Treviño, a Laredo native who’s working with Sanders campaign leaders to try to bring him to the border. “If we get Hillary, we get another four or eight years of Barack Obama.”

Lerma, 70, is a self-described “revolutionary communist” who had never in her life given a cent to a politician.

“Insurance company CEOs have salaries with way too many commas and way too many zeroes,” Lerma, who works at Bexar County’s Center for Health Care Services, told the Current. “We need single-payer Medicare for all. Everybody in and nobody out. If you’ve got a pulse, you get coverage.”

She may be two generations younger than Lerma, but Olympia Cuéllar concurred that Sanders best addresses her concerns as a young voter.

An incoming junior majoring in government and international affairs at the University of the Incarnate Word, she said only Sanders is talking about people like her.

“He truly wants to empower college students,” said Cuéllar, 20, president of UIW’s College Democrats. She pointed to Sanders’ proposals such as cutting tuition in half for low-income students and creating more jobs for young graduates.

Tackling economic inequality head-on seems to be the glue that holds all issues together for Sanders’ platform.

That’s what convinced Sean McDonald to eventually jump off the Hillary bandwagon and join the Sanders camp.

McDonald dropped out of high school but then went back and got his GED. He later attended the Alamo Colleges. Today, he’s a small business owner, running a plumbing and handyman service.

But he’s got politics flowing through his blood, not surprising given his parents’ activism. His father served as a Bexar County district judge for a decade and his mother, a lawyer, ran for state office.

His hope is that Sanders’ talk of wealth redistribution will re-energize those who have burned out of politics or have never taken part in the process.

“As Bernie says, we need a real living wage,” said McDonald, 38, who drew around 50 participants to his house party for Sanders’ national virtual town hall last month. “Today’s minimum wage is a form of economic slavery because all you’re doing is working to pay your bills.”

McDonald and other Sanders supporters in SA echoed a similar sentiment when asked about the candidate’s realistic chances of winning the nomination and even the presidency:

Nobody gave him a chance when he launched his campaign and most pundits still write him off as an interesting, entertaining distraction. Yet nobody’s getting the crowds he’s drawing. He’s even beating leading Republican candidates in head-to-head polls.

The buzz is palpable and it’s spreading. Question is, will that buzz turn into votes?

“I seriously think there’s a chance for him to at least win the nomination,” said McDonald. “The impossible becomes possible if you get enough people behind a message.”