A Guide to Can't-miss Performances During Luminaria 2016 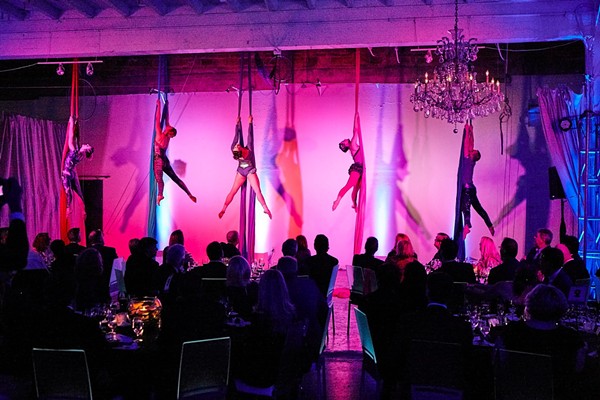 ARCOS Established in 2011 in Santa Fe and now based in Austin, ARCOS has garnered a reputation as one of Texas’ most cutting-edge performance groups through its own boundary-pushing performances and collaborative efforts with emerging and established artists. Directors Curtis Uhlemann, Erica Gionfriddo and Eliot Gray Fisher lead the troupe in multidisciplinary performances blending choreography, lighting effects, and a vast array of visual media (including 360-degree video). The group spent the better part of this year touring their latest production throughout Texas and New Mexico. Titled Domain, the project examined the relationship between human beings and artificial intelligence. For Luminaria, ARCOS will present a site-specific performance that consists of two elements: along with several pop-up performances, attendees will be able to view video footage by scanning signage with their smartphones at five specific locations. Free, 8-11pm Thu, Nov. 10, Hays Street Bridge; 8pm-midnight Fri, Nov. 11, Carver Community Cultural Center (226 N. Hackberry St.), Dignowity Park (701 Nolan St.) and Lockwood Park (801 N. Olive St.).

Ballet San Antonio was founded in 1985 by Mayra Worthen and Melissa Hale Coyle under the name Texas Ballet Concerto. Since then, it has grown, quite literally, by leaps and bounds, expanding its classical repertoire over the years, and becoming the resident professional ballet company of the Tobin Center for the Performing Arts in 2014. The company has shown its commitment to the city through its many outreach programs such as Learning That Moves You, which includes free ballet classes for children at the San Antonio Boys and Girls Club, and Ballet in the Park, a free annual performance in Travis Park. Ironically inspired by the unpredictable South Texas weather, artistic director Willy Shives, formerly of the Joffrey Ballet, will lead the company in a special Luminaria performance titled Elements. “Our postcard perfect skies melt with time into a fiery sunset. As night falls, a light rain becomes wild and heavy. Alas, we find tranquility under the autumn moon.” Free, 9:30pm Fri, Nov. 11, Carver Community Cultural Center, 226 N. Hackberry St.

Arte y Pasión After a masterful performance in Colores, part of the 2015-2016 season at the Carver, the avant-garde flamenco troupe Arte y Pasión make a triumphant return to the Jo Long Theatre. In this  special Luminaria performance titled Una Flor en el Cruce (A Flower in the Crossroads), artistic director Tamara Adira leads an ever-evolving cast of dancers and musicians in a multidisciplinary performance juxtaposing flamenco with classical and modern dance. Since the company’s 2010 debut in San Antonio, Adira has brought in exquisite talent from across the globe including late flamenco masters Teo Morca and Timo Lozano to perform alongside its members. For this performance, Adira looks no further than San Antonio’s own Teresa Champion. Known for her appearance in the 1960 John Wayne film The Alamo, Champion is often credited, along with her late husband Willie “El Curro” Champion, as being among the first to bring flamenco to San Antonio. A Flower in the Crossroads draws inspiration from the complex root system of flowers, a metaphor for Adira’s own persevering spirit. “There are obstacles vast and impossible to push through,” Adira told us. “But the persistent root system of a flower is stronger. When we find that root system within ourselves, we can push through anything.” Free, 8pm Fri, Nov. 11, Carver Community Cultural Center, 226 N. Hackberry St.

The Renaissance Guild Billed as “San Antonio’s premiere black theatre company,” The Renaissance Guild was founded in 2001 with a mission to examine, preserve and celebrate of the black experience through theater. Through various outreach programs including youth summer camps and art classes, the nonprofit aims to provide opportunities for artistic expression to some of the city’s underserved populations. For their Luminaria performance, The Renaissance Guild will present selections from Divas of Eastwood, a musical revue co-produced by the Carver Community Cultural Center. Described as “a musical tribute to the Chitlin’ Circuit,” the original production pays tribute to legendary local venues (the Eastwood Country Club and the Keyhole Club among them) that hosted such iconic performers as Louie Armstrong and Etta James. Free, 8:40pm Fri, Nov. 11, Carver Community Cultural Center, 226 N. Hackberry St.