A Guide To Gourmet Camp Cooking 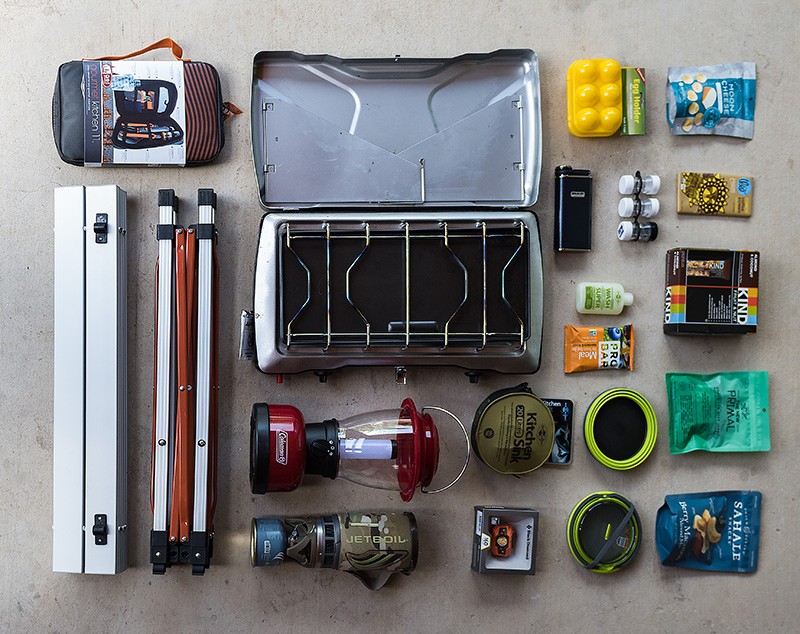 For the first time in years, Texas' outdoor enthusiasts can revel in the burn ban being lifted across most of the state. This means aspiring campfire chefs can cook over an open flame when venturing into the backcountry or road-tripping to surrounding parks. To make the most of the culinary opportunity, we turned to Kayla Luckey, a self-described foodie who works at SA's REI store (which supplied the items pictured) and teaches free monthly camp cooking classes once a month at the store.

Every good chef needs proper equipment and camp cooking is no exception. While Luckey notes that most things you would use in a regular kitchen can be used outdoors, there are products that make cooking in the confines of a campsite —or out of a backpack — easier.

Camp-friendly cookware is at the top of the must-have list. Luckey recommends the GSI Outdoors Bugaboo cooksets or Sea to Summit X Pot series. Both are compact and feature multiple size pots, pans with foldable handles and built-in strainers. They're durable, heat-resistant and, in the case of the X Pot, collapsible.

For ambitious chefs looking to prepare multi-course meals, you may need additional cooking surfaces. This is where a camp stove comes in. Coleman Stoves reign supreme, but Luckey also likes the MSR Pocket Rocket for backpackers concerned about weight. The Jetboil, while primarily used for boiling water, becomes a gourmet French press given the right accessory.

Other essentials include a foldable aluminum table for easy sanitation if you're car camping, a food thermometer, mini spice rack, egg holder and a headlamp or lantern. For clean-up purposes, check out the Sea to Summit Kitchen Sink and biodegradable soap. Wash the cleaner items first and be sure to throw away dirty water at least 200 yards away from other water sources.

Obey The Laws Of Nature & Texas

Think twice before picking berries or digging up mushrooms, as most state and national parks forbid foraging. Gathering firewood is also illegal in Texas, so buy it or bring it with you.

REI stresses the seven "Leave No Trace" principles, which include minimizing the impact of your campfire, respecting wildlife and disposing of waste properly (that means packing it out, not lighting it on fire).

"Clean up the first night or you'll have a recurring problem with bugs and raccoons," says Luckey, who also uses Loksak Opsaks for food storage. "They're odor-proof bags originally developed by the military."

She also recommends removing excess packaging beforehand and writing instructions on the bag, as well as using leftovers.

"There's nothing better than steak in the evening and steak and eggs for breakfast the next morning," Luckey says.

"There's no such thing as a diet when I'm camping," says Luckey, who looks to sites like Dirty Gourmet or America's Test Kitchen for recipe ideas. Some of her tried-and-true favorites — which she often modifies for the outdoors (see sidebar). But first you need to ensure your ingredients will stand up to camping conditions.

"In Texas, it's almost impossible to keep something fresh in a backpack for longer than a day," Luckey says. "With car camping, you have more flexibility."

For herbs and delicate vegetables, like tomatoes or avocados, Luckey stores them in a hard container to prevent bruising or wilting. Hard cheeses usually fare well despite the heat and food safety is key when cooking meats.

"Keep [meats] below 40 degrees for storage and above 140 degrees [160 degrees for chicken] for a cooked temperature. Also be cognizant of cross-contamination with utensils and cutting boards," Luckey says. "Ultimately, I think there are no bad foods to cook with outdoors, only inappropriate and inefficient cooking methods ... If I knew I was going somewhere I wouldn't have a campfire, I'd probably avoid baking potatoes or roasting corn, or really anything to do with a Dutch oven like stews or baking biscuits."

As far as experimenting goes, she advocates for making recipes at home first.

"If you're comfortable winging it and coming up with your own recipes at home, go ahead and do that outside," Luckey says. "But if you aren't used to it, don't start when you're camping."

Prepare ahead of time — by mincing garlic, cutting up peppers or making sauces and freezing them to unthaw later — and factor in cooking time.

"Things cook differently out there," Luckey says. "If you're making a new recipe, don't come back from your hike at 6 p.m., come back early and let yourself relax and enjoy the process."

Another tip for enjoying yourself? Wine. There are-fillable carafes so you don't have to pack the bulky bottle. Cheers to that!

"I'd probably do a cold appetizer, like crostinis — you'd grill the toasts, but the rest could be cold — crudites or a charcuterie board," Luckey says.

Other gourmet snacks — such as buffalo jerky, Gouda moon cheese and almonds with cranberries, honey and sea salt — can be picked up at REI.

The original recipe from America's Test Kitchen calls for salmon, but Luckey substitutes trout caught from one of the ponds or lakes stocked year-round by the Texas Parks and Wildlife Department.

Lay thin lemon slices across bottom of frying pan, like cobblestones. Place the parsley stems, some shallots and trout fillets — skinned side down — on top. Add wine and water. Bring liquid to a simmer, then reduce heat and cover. Cook for approximately 11-16 minutes or until temperature is 125 degrees (sides of fish should be opaque and the center translucent). Remove fish and simmer remaining liquid for 4-5 minutes or until it's slightly thicker. Combine remaining shallots, parsley leaves, capers, honey and olive oil in bowl. Strain cooking liquid into bowl and whisk. Spoon vinaigrette over salmon.

According to Luckey, this recipe, adapted from Dirty Gourmet, also works well with mead or cider-poached apples. “The pears can poach while you’re eating dinner or cleaning up after the main course.”

Peel the pears, but leave them whole with stems. Slice a small amount off the base so they sit upright. Pour the wine, water, sugar and spices into a pot set on medium-low heat. Add pears and let simmer for approximately 30 minutes or until fruit is a deep red color. Remove and serve pears alongside liquid. You can also boil the liquid until thick and drizzle it over the pears.