Breaking Down the Breakdowns

If Dimebag is prominently displayed in your bedroom (particularly when a blacklight is on), there are pot leaves on your tailgate or the guttural "Wah-ah-ah-ah" of Disturbed's "Down With the Sickness" doesn't spontaneously make you nauseous, then you're probably well aware of the annual catharsis of teenage angst, blue-collar frustrations and the synchronized homoeroticism of predominantly male mosh pits (these are not negative things, people), that make up Bud Light's annual River City Rockfest.

This year's festival, awash in waves of body odor, dirt weed and water-beer, will feature numerous metal and metal-ish acts unleashing themselves upon a town that is known to fancy a shred or two. And just like Rockfests past, several local groups will be showcased, including modern post-everything rockers Donella Drive and Lynnwood King, pulling double-duty with his soul-rock group The Revival and goodtime sing-a-longhairs The Heroine.

Whereas former Pantera frontman Phil Anselmo has gone on to become a master curator of underground metal at his annual Housecore Horror festival, as well as remaining super pissed with his post-Pantera ensembles Down and Superjoint Ritual, the drummer of the Arlington, Texas band and brother of the late "Dimebag" Darrell Abbott, Vinnie Paul has taken his seat upon the drum throne of mushy metal supergroup Hellyeah.

"I don't care what Manson said, rock ain't dead, it's just in rehab / Tell Betty Ford I need a bed, rock ain't dead, it's just in rehab." This passage from Texas Hippie Coalition (THC, hehe) is delivered over crunchy riffs most often utilized to sell some form of "manly" body spray or "XXXtra cheezy" junk food and serves as the band's Call to Rock.

Wielders of natural disaster-inspiring rock 'n' roll, Scorpions are sure to be a crowd pleaser with their decade-spanning occupation of the classic rock radio dial and exhausting touring schedule, which has left generations of SA fans well-weathered by the German band.

Also headlining alongside the Hasselhoffian metalheads is the aforementioned Disturbed, Mötley Crüe bassist Nikki Sixx's post-Crüe party posse Sixx:A.M. and Christian dread-bangers P.O.D., who rose to prominence on the popularity of thinly veiled rap-rock for Jesus tracks "Youth Of The Nation," "Alive" and breakout single "Southtown." Sevendust, who also ruled the late-'90s airwaves, will be playing alongside newcomers Pop Evil and Bullet For My Valentine.

Gothenburg, Sweden's Avatar, who traveled the farthest of all the bands on the bill to grace the Spurs' stadium parking lot, incorporates the jilted, jolty math-leticism of System of a Down on their most recent single "For the Swarm," but, overall, prefer a more placid, mid-tempo take on the curious time signatures and rhythms of SoAD.

Proprietors of "Thread" music, Ohio's Red Sun Rising wander the most into the acoustic emo-metal country of Aaron Lewis' Staind, with dashes of widely loathed Canadians Nickelback. This is one group that is definitely gonna divide the longhairs between those that are willing to shit-kick and those that just want to kick the shit out of Nickelback fans. 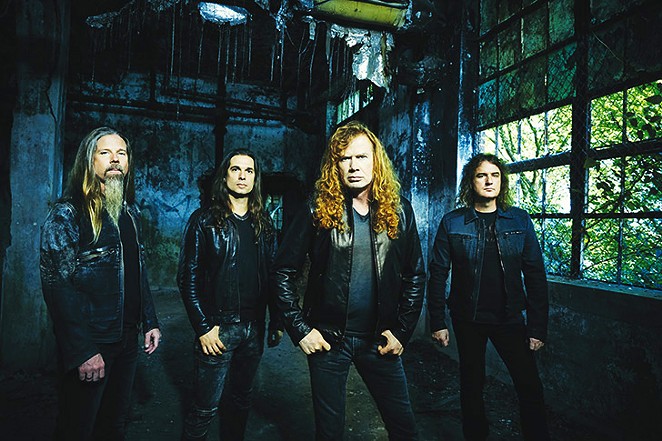 Napalm Records' DevilDriver, fronted by Coal Chamber's Dez Fafara, mince no words when it comes to their love of all kinds of music, giving a blistered middle finger salute to anyone that tries to pigeonhole the melodic rock band.

Clearly, the bill isn't all brutish jock rock. The Sword, carrying the torch, forging the steel and brandishing the battle axe for gallant stoner metal, will play alongside redheaded ripper and Metallica bane Dave Mustaine and Megadeth. The Sword has been building a solid national fan base for years, however, as Austin's most visual metal exports, the Lone Star love runs deep, hot and black for the majestic heshers.

The unfortunate irony of Megadeth and, particularly Dave Mustaine, which is well documented in the hilariously aloof rock doc Some Kind of Monster, is that Mustaine, though visually broken-hearted at playing second fiddle his entire career to the Bay area thrashers, has escaped the fickle fate of "Alcoholica" and their panned recent efforts by not being in the most commercial metal band of all time.

Hatebreed may be the most awkward contribution to the bill as fans of the legendary hardcore group are not likely to drop the cash required to see the only band they'll enjoy. However, it should be worth the price of admission to see mall metalheads flip their shit as Jamey Jasta tears through classic tracks off Satisfaction... and Perseverance.

One thing you can't take away from these road-weary bands, besides their affinity for long, stringy locks and black fingernail polish, is their work ethic. When Top 40 radio is consistently dominated by lame-brained lullabies and pubescent party anthems, it's commendable to still be working, trucking along down that highway to hell, putting considerable mileage between yourself and profitable past glories, stopping in SA to rock your fellow true believers along the way.