A harvest of new restaurants 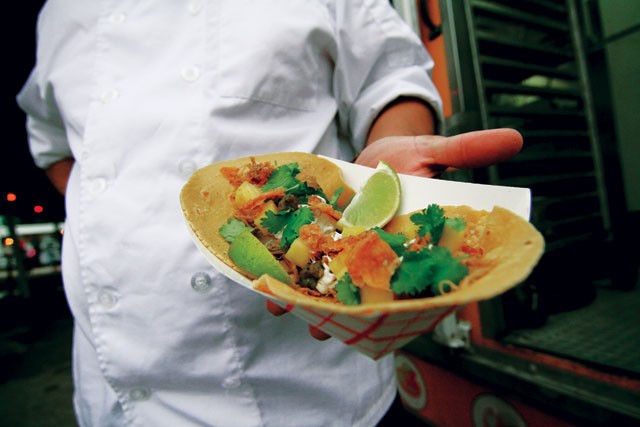 The emphasis now is on casual dining, but that doesn't mean casually thrown together food is passing muster. On the contrary, chef-driven restaurants with high standards are flourishing in SA. Here are a few that we're fond of from this year's crop:

Alamo Street Eat Bar (609 S. Alamo), Jody and Steve Newman's transformation of the old Acapulco Drive-Inn to an urban food truck park is a happy note for Southtown that keeps on singin' since it opened last April. Notable beers recently on tap included Ranger Creek's Oatmeal Pale Ale and 512 Wit from 512 Brewing Co. Trucks we're liable to grab a bite from include Cullum's Attaboy, with a great rotating cast of burgers; Pieter Sypesteyn's Where Y'at Food Truck for his fried oysters and pork belly po'boy; Jason Dady's duck-centric DUK truck, and Ana Fernandez' ode to Tex-Mex, the Institute of Chili.*

Prefer wine, instead? Try Bliss (926 S. Presa). A decent assortment of Euro-centric wines joins New American cuisine by Mark Bliss, who, after a long run at Silo, opened his first solo effort last spring in a converted service station. An intimate bar is the perfect spot for samplers; dinner offerings include duck with foie gras and a sophisticated vegan platter that many a non-carnivore depends on. Down the street, Lisa Astorga-Watel helms the kitchen at Bite (1012 S. Presa), the new late night bar/restaurant she co-designed with husband Damien Watel (Bistro Vatel). Smaller portions of Euro-fare intended for sharing include steak tartare with toast tips and a delicate octopus carpaccio, served with 70s flair. The Blue Star Brewery (1414 S Alamo, Ste. 105), an old Southtown standby, has upped its game with chef de cuisine Charles Clark turning out Southern fare nuanced by European discipline. Their burger is made of thrice-ground veal provided by grass-fed cows; the secret ingredient is ground house-made bacon. Local sourcing is key to the project.

The Pearl has seen new growth, too, and is buzzing with the CIA's new student-staffed restaurant, Nao (312 Pearl Parkway, Ste. 2104). Introducing flavors from all of Latin America and the Caribbean, Nao presents a visiting chef program that highlights Latin American dishes with a contemporary interpretation. Boiler House Texas Grill and Wine Garden (312 Pearl Pkwy, Building 3) is a wine-centric restaurant occupying the former boiler house at the Pearl. The menu designed by executive chef James Moore focuses on grilled items from local farms and markets, with a focus on "Texas ranch-style" cuisine, complemented by an extensive list of wines. The Granary (602 Avenue A) is a new gastropub featuring barbecue and beer housed in an old house on the south edge of the Pearl complex. Tim Rattray is extending notions of BBQ to global traditions, but still delivers some succulent brisket. Brother Alex Rattray's beers display unusual maturity; his rye saison is stellar.

Bird Bakery (5912 Broadway) is known for their red velvet cake with butter cream, a chocolate and chocolate chip cupcake with peanut butter cream frosting, and carrot cake. Many of their products are made from recipes from owner Elizabeth Chambers' grandmother.

Laurent Rea gained some notice at L'Etoile and Olmos Park Bistro; at his own spot, Laurent's Modern Cuisine (4230 McCullough), he enters the spotlight with a changing menu displaying French techniques put to good use with local produce. Last week's menu included sauerkraut and venison tarte, P.E.I mussels, rib eye steak with asparagus tempura. His desserts are not to be missed. Texas master chef Stephan Pyles gave Sustenio (17103 La Cantera Pkwy.) its Southwestern trend, but executive chef David Gilbert is the one who is taking this high-tech equipped kitchen at the Eilan Hotel Resort and Spa to the next level. The ceviches (and the drinks) receive high complements; look for innovations like the Texas red snapper tamal in red Thai curry masa.

*The original story incorrectly identified Ana Fernandez's truck as "The Republic of Chili." Feels like a whole other country, but it's The Institute-not Republic-of Chili.-- Scott Andrews