A Joyride Inside St. Arnold’s Santomobile 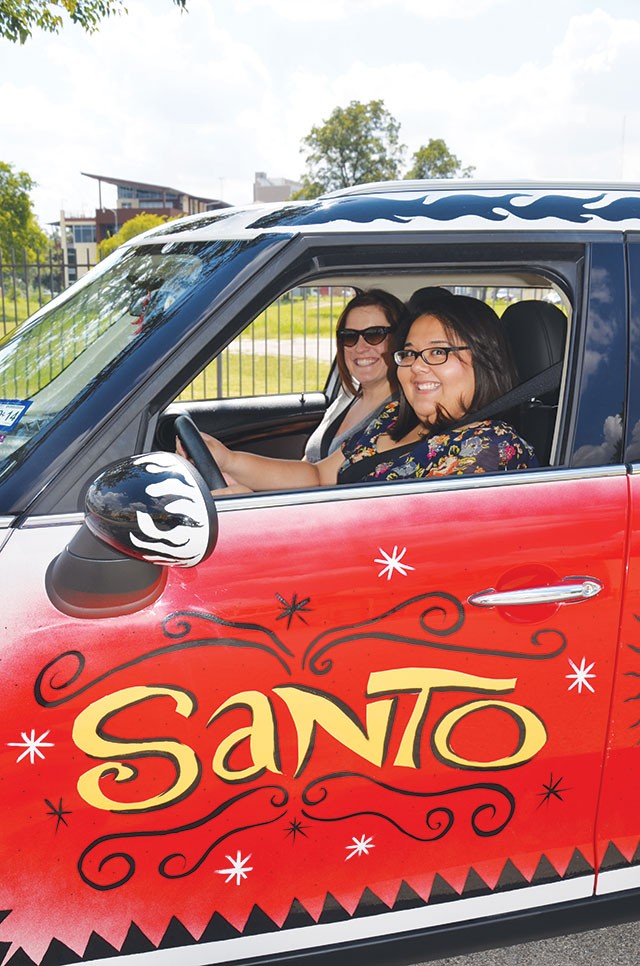 You might have seen it zipping around town, probably near your favorite watering hole. You might even have snapped a photo of it while out on the road, or waved to the driver as you cruised I-10. But only a handful of beer lovers can say they’ve had the chance to get behind the wheel of Saint Arnold’s 2012 Mini Cooper Countryman, or Santomobile, one of the fleet of six rides all pimped out with hand-painted designs by artist Carlos Hernandez, who also designed the Santo label. I added my name to that short list a few weeks ago.

Before putting on my racing gloves (just kidding, I left them at home), I chatted with Nicole George, SA’s beer rep for Saint Arnold, who gave me the rundown on the Mini. For starters, George uses the car for all business purposes. This includes meetings with prospective clients, four monthly tastings at local stores and occasional events with partners. Although George does have her own personal vehicle, the Santomobile is her primary mode of transport.

Her favorite features of the Mini are the unique paintjob, as well as customizable cabin light colors, and then, of course, there’s sport mode.

We met up for a quick joyride on a sunny Tuesday, immediately after a thorough detail job for the Countryman, because you can’t just drive this little dude through an automatic car wash or even a self-serve joint. He must be hand-washed to preserve Hernandez’s hand-painted designs, but time and the elements have already taken their toll. Upon closer inspection, tiny cracks and brush strokes become evident and even George, who’s been driving the Santomobile for two years, picks up on newfound details she hadn’t seen before like the dots on the trunk and tiny bones along the side.

We hopped in and headed into the Pearl area, looped into Monte Vista and then zoomed into Downtown. Mind you, we didn’t turn on sport mode, although George did offer, but the Mini is plenty powerful on its own, and surprisingly roomy. The car’s filled with Saint Arnold merch, tasting cups and such, but George, much like most females, has decked out the car with her own personal touches, including lip balm, hair ties, koozies and a string of red jalapeños, which hang from the rearview mirror.

“I’ve wondered if it would be OK with Saint Arnold if I put a Spurs sticker on the back windshield,” George writes in an email.

Our ride was fairly tame—we did get the occasional gawker, but no other interactions of note. Again this was a 20-minute cruise, not a jaunt down I-10 where George happens upon overly enthusiastic Santo fans who drive up alongside her and honk and wave their approval. Her favorite encounter, “Getting up to the drive-thru window and having the girl handing me my order offer to buy it.”

As we came full stop back at our office (with nary a scratch on the Mini, the same which can’t be said for my relatively new Fit), my joyride complete, I had a hard time giving up the keys. There are an infinite number of cool points that come along with driving the set of wheels that belong to the oldest craft brewery in Texas.