A Letter to the Monterey, from a Grateful Food Writer 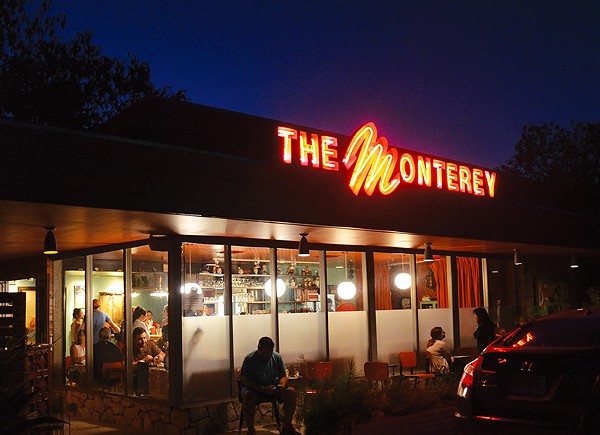 It seems silly to write this now, with your doors still open and sherry still flowing. Some would argue getting verklempt over the closing of a restaurant seems over the top or ridiculous and they'd be correct. But something about this particular closing warrants more introspection than other closures.

In 2010, when you first opened your sliding gate, I was but an editorial assistant in the largest metropolitan newspaper in South Texas, hoping to get her big break while simultaneously going through a gnarly quarter-life crisis. Months from turning 25, I'd yet to find my tribe. Sure, I had and still thankfully have a handful of great college pals, but I yearned for a group to call my own.

Like the early adopters who filled the twinkly patio, I took to the The Monterey within months. Sitting outside on a patio and eating panna cotta dusted with crushed Flaming Hot Cheetos was a common pastime to the detriment of my wallet. But it didn't matter because I'd found a group of people who wanted to nerd out about ingredients as much as I did. Yes, service was always cooler than thou, but the staff had a secret — we were sitting in this enchanted urban oasis with food that tasted good and was inherently different from what we were used to eating.

While on the topic of coolness, the service staff has had to endure plenty during their stays. Here's a fun one from a recent Yelp review: "The workers look a little dirty but I get it. It's a hipster type place, what do I expect?" Lest we forget we're sitting outside ... Here's another from 2013, "The Monterey is a tryhard hipster hut, that being said, it isnt all bad. [sic]"

Yes. It was hipster restaurant. Everything about it is ironic, but it was also feverishly different, rabidly irreverent and much-needed in a town that's boomed culinary since then. Why else would a gooey grilled cheese have made such a splash if it wasn't a) delicious and b) unlike others you'd put in your mouth? Or why would they introduce us to bone marrow only to sucker us back in with a $5 burger on Tuesdays? Monty, you kept us on our toes.

We'll miss the food. I can speak for other food enthusiasts (don't call us foodies, please) who needed to try the latest dish shared on Facebook. Anyone remember the rice bowl with perfectly drippy egg, bright kimchi and pickled daikon? That was my jam for weeks on end. Or that first sip of Jester King's Black Metal shared over a bowl of those Brussel sprouts? Who didn't learn to appreciate pickled everything from the staff at The Monterey (which created insane menu items — some winners, others not so much — inside a 250-square-foot kitchen)?

We'll miss the booze. Chad Carey, whatever you may think of the dude and his Yelp responses, puts together one hell of a wine list. The bubbles on the patio, the Mr. Darcy with watermelon juice and Lillet Blanc, the solid mezcal list that followed later were all part of the joint's je ne sais quois.

Let's not get sappy (tears will make our fried chicken soggy). Let's not overthink this. We had fun while it lasted. Carey had a blast and is moving on to other projects. Cooks who toiled on the wee line have gone on to work at Austin's Qui, NYC's Momofuku, San Francisco's SPQR and Houston's Coppa Osteria and other fine dining joints.

We've got two weeks to eat up, wine down and say goodbye. Get in there before the sliding doors closes on The Monterey one last time. 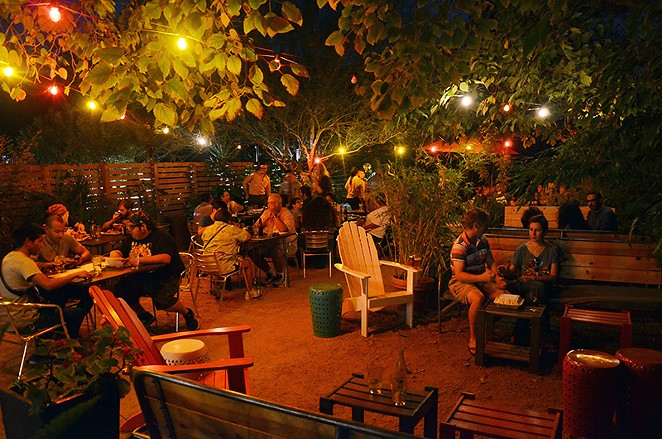 The Monterey is where I went when I wanted something different, and also when I just wanted a crapload of french fries and cava. It's where I ate fried goat balls and the best burger ever. It's been the scene of a thousand fun memories and the start of many a buzzed night, and I'll miss it like hell. — Lauren Madrid, food blogger

The S.A. eating scene has come so freaking far since November 2010, though we find ourselves defaulting to a select handful of restaurants. It's hard for new places to crack the everyday, gotta-eat-please-make-a-decision lineup. Life is too short to be disappointed in your food, and blame El Monty for helping to raise flavor standards in this city. The shutdown sucks, but I think going bye-bye after only five years will embellish the legacy of the place. Like Camelot, it can be seen as that one, brief shining moment (most) everyone viewed as something awesome and unparalleled in its own tasty way. — Brett Thacker, neighbor and fan