A Look Back at Fiesta San Antonio Through the Years

By San Antonio Current Staff
Share on Facebook
Tweet
Submit to Reddit
Email
For the average San Antonian, Fiesta is their favorite time of the year and with good reason. We dug through UTSA's archives to find some throwback pics from the city-wide celebration – some photos as recent as the '90s and others more than 100 years old! Let's take a trip down memory lane.

Bozo the Clown in the Fiesta San Jacinto River Pageant
You're forever in our hearts, Bozo.
Spanish Dancers at NIOSA
Since this photo was taken in 1972, these ladies should totally come back for another performance together.
Pearl Brewing Company Float
This float must have been super effective, because we all know how much of a hotspot the Pearl is today.
Cornyation Duchess at Arneson River Theatre
Did you know that Cornyation goes back to 1951, when it was part of NIOSA and at Arneson River Theatre? Things sure have changed.
Jay Perez Float in the Flambeau Parade
Dating back to the '90s, the Tejano singer's float look like it was inspired by The Lion King.
Cracking Cascarones at the First Fiesta UTSA
So much hair to get confetti out of. Then again, it was 1978.
Filipino Community Parade Float
Though the year is unknown, it's pretty cool that there was inclusion for the Filipino community back in the day.
Filipino-American Association Dancers
Peep the queen in the back just living for the entertainment. This 1974 photo is just too cute.
Fiesta Carnival 1961
Aww, look at the old Kaufman's!
Cracking Open a Cold One with The Boys
Big hair, don't care. Big glasses... Lol, bring back style from the '90s.
Skip ad in
Save the Alamo Float
Protecting the Alamo has been an issue since the very beginning. This float, which made an appearance in the 1904 parades, was sponsored by Joske's.
Woman Eating Turkey Leg at Fiesta UTSA
Not much has changed in this respect.
Lone Star Brewing Co. Float, 1906
The brewery's float had a sign that said "Patronize Home Industry."
Lone Star Brewing Co. Float, 1954
Consider this a major upgrade.
University of Texas Longhorn Band
Hook 'em.
Incarnate Word College Float
Shoutout to the Cardinals! Holding it down since 1954.
Cascarones Attack
UTSA students had no chill about cascarones at Fiesta UTSA back in the '70s.
KONO-TV Films the Flambeau Parade
This 1962 photo shows KONO-TV setting up to record the parade. We wonder how much tickets sold for back then.
Living Fabulously at Fiesta
We bet they were at the Webb Party in this 1995 photo.
Junior Division San Antonio Public Schools Float
This photo is so dreamy.
Skip ad in
First Fiesta UTSA
UTSA has been keeping up with Fiesta celebrations since 1978, when this photo was taken. There was live entertainment from the likes of Barbara Gilkey and Allan Kaster.
Chilling at the Flambeau Parade
The Alamo Business Council, an LGBT organization, brought the community together for special events.
Poteet Strawberry Festival Float
This is like looking at old family photos.
Dorothy Hillje, Duchess of Abalone on a Parade Float
This is photo is from 1923, 95 years ago!!
Battle of Flowers Parade
A look back at the parade in the 1930s.
Fiesta San Jacinto River Pageant
The 1955 parade had a "River Ports of the World" theme, with this float representing the port of Veracruz.
Fiesta San Jacinto River Pageant
That same year, this "Port of Honolulu" float was also entered.
Dancer at Fiesta Flambeau Parade
Work it!!
Regina Beckmann aka"Princess Daffodil"
Regina was the "it girl" back in 1921.
Drinking at the Fiesta Block Party
THOSE SHORTS!
Skip ad in
Serving Food at Fiesta Block Party 1994
The true heroes of Fiesta.
Pioneer Mills Parade Float
This undated photo shows Pioneer Mills' simple float, complete with the iconic tower.
Fiesta Royalty at Battle of Flowers Parade
They were far less flashy back in 1910.
Peterie Guerra, Miss Fiesta San Antonio
Pictured here is Peterie Guerra, who was crowned Miss Fiesta during the 1950s.
Flambeau Parade 1995
Whose tio is this?!
More slideshows 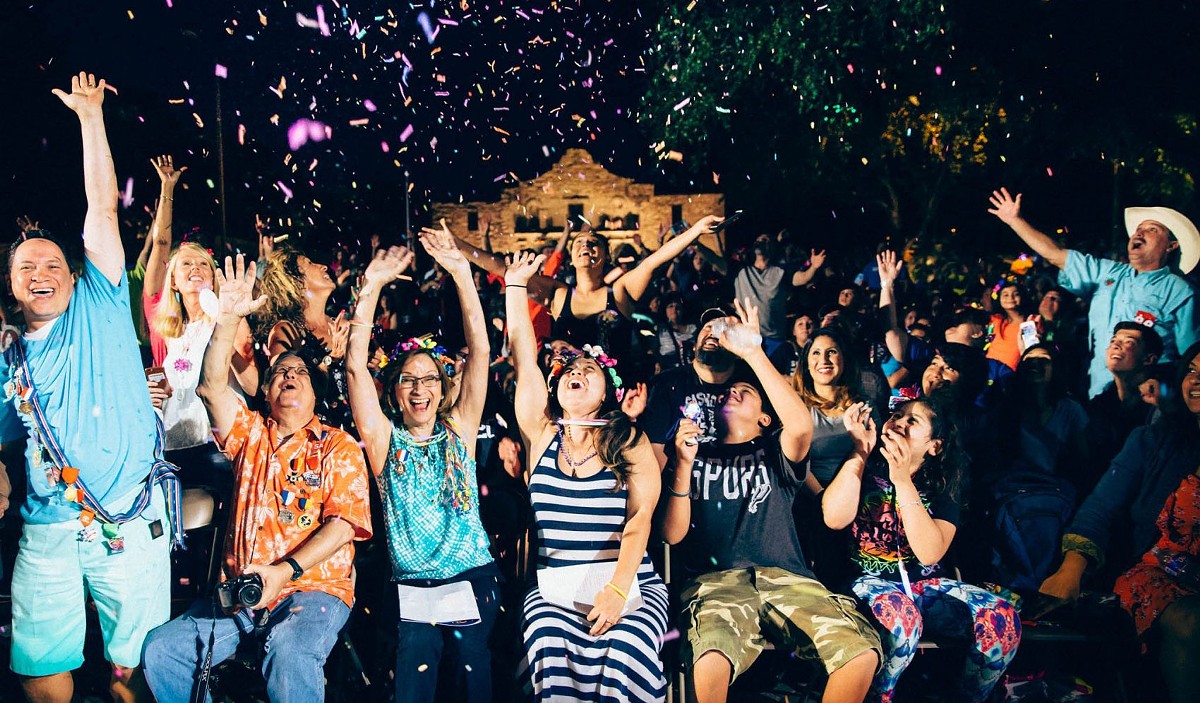