Seems like there have been many old nu-metal and “active rock” groups descending upon San Antonio recently, like a '90s baggy jeans-wearing, Airwalk-rocking blast from the past. Last week P.O.D. played a set at this year’s Oyster Bake, tonight Stabbing Westward and SA’s The Union Underground are slated to play Siesta Fest and last night, A Perfect Circle rocked the walls of Freeman Coliseum.


Maybe we’re just suckers for nostalgia. Whatever the reason, last night made it crystal clear that the Alamo City still has a big place in its heart for A Perfect Circle — and, in particular, for singer Maynard James Keenan.


Even as the “cholo goth” duo Prayers (which was kind of like Depeche Mode meets Beastie Boys at a graveyard party) took the stage to open the show, fans kept screaming for Keenan to come out as the lights dimmed and fog started to roll across the stage.

A Perfect Circle opened with “The Package”, the first track off the band’s second album Thirteenth Step. The arena erupted in a roar of applause and screaming from the crowd. The band then took a dive into “The Hollow”, which the opener on their debut album Mer De Noms, all as the veil that had covered the front stage fell to the ground in a dramatic reveal.


These guys don't really move around too much while they play. Not that A Perfect Circle’s music calls for an epic stage show, however. In fact, some of the night was mellow and melodic. It was a set list designed for true A Perfect Circle fans – fans who appreciate the deep cuts and non-radio tracks. Except they didn't play “Judith” or even “3 Libras" (which I'm sure some people were waiting to hear). Plus there was a random rant from Keenan about experiencing music in real life and not through your phone. 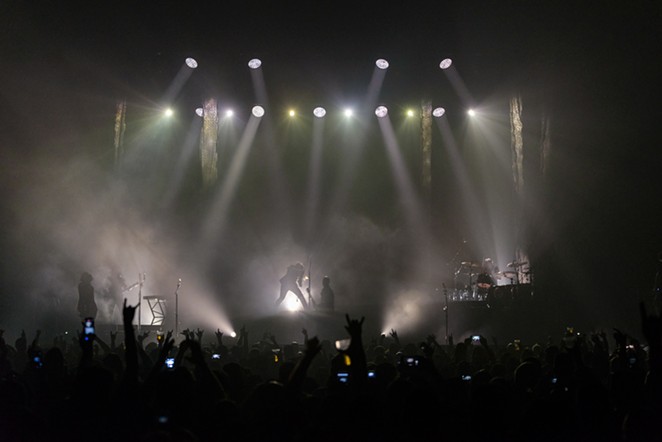 It was a performance that shows how good A Perfect Circle has become at reading and playing to their crowd — particularly one that loves them, as was clear during last night's set. Keenan, who’s now 53 year old, was on pitch, guitarist Billy Howerdel’s solos were flawless and the rest of the band grooved throughout the night. For a band that only really picks up and plays together every 6 years or so, A Perfect Circle somehow still made rocking a stadium look easy.