A Q&A With the SA Foodies Group Founders 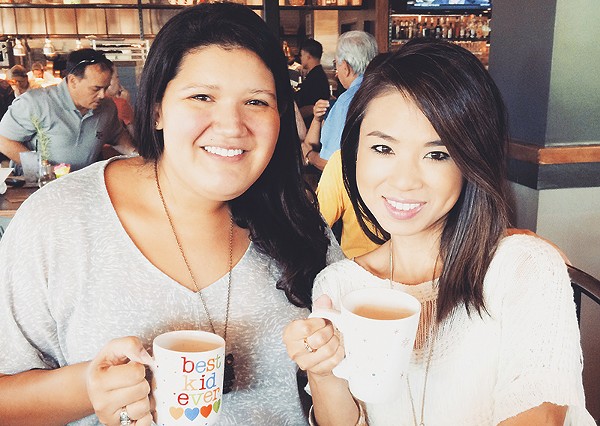 It all started with a double tap. Well, several double taps. After following Lisa Rivas-Moore aka S.A.vory on Instagram for a few months, Kim Olsen, or kimmyluvsfoodsa, was itching to meet her foodie brethren.

Over happy hour at Cured, Olsen and Moore, met and the idea for the SA Foodies group was born. The food-based meet-up attracts local Instagrammers with a serious passion for food and a bigger appetite for exploring San Antonio's booming culinary scene.

Over coffee and beer at Rosella Coffee Co. (What? It was past 5 p.m. on a Friday), I met with the Rivas-Moore who works at a law firm downtown and Olsen, a marketing team member for Sodexo, a hospitality company, to chat about the group's frequent meetups, what they love about restaurants in town and how they're turning their tap-happy San Antonians into full-fledged foodies.

When was the first official meet-up?
LRM: The first was in April at Bakery Lorraine.

But how did you two meet?
KO: I want to meet people and I feel like Instagram is a great way to introduce yourself to people and be like, 'Let's meet for drinks.' I reached out to Lisa and said, 'Hey, I think you're cool.' It was probably as corny as it sounds. We met for drinks at Cured, and neither one of was a serial killer.

LRM: We wanted to make sure of that first...

KO: And she posted about it and a lot of people commented about wanting to meet up. That turned into us messaging a few of the foodie accounts — safoodbites, breaking.bread.in.sa — I wanted four of them, because I thought nobody would show up. I said, let's invite these four, five people, figuring no one had interest in it and yet everyone showed up. I think they all wanted to meet Lisa.

Let's go back to when your love affair with food started...
LRM: Mine started because I love eating out. My husband used to be a photographer here in San Antonio, and I started posting photos so that other people could see what we were eating. I just want people to know that there are other restaurants out there besides Whataburger — don't get me wrong, I love Whataburger.

KO: She really does.

LRM: However, there's other restaurants besides chains. I wanted to give local restaurants a chance to get recognized. That was last fall in October.

How many followers would you say you have now?
LRM: Around 4,200. A majority of them are from San Antonio, but some are just random people. I'm also a community leader for Best Food San Antonio.

Kim, how did you start getting into food?
KO: I love food. Period. It was about three years ago. I had just graduated, one of my friends was like, 'Have you ever been to The Monterey?' It was one of the first places I went to in San Antonio that wasn't a chain. I'm so sad they're closing, I can't even deal. We'll probably go once a week before they close. It was so different. I had never been anywhere that wasn't Chili's, or Applebees. Then I started following the Current, and going to those events, and I took a long break from Instagram, but last year at the Hot Wells Harvest Feast, I was like ... this needs to be talked about. I guess that's where I started with the Instagram photos.

Do you have only foodie friends at this point?
KO: I have converted all my friends. Normally, it's like Kim knows the good places.

How often do people ask for recommendations?
LRM: I get one everyday. I just got one for sushi in San Antonio, which would be Godai or Niki's Tokyo Inn. It's usually a few people a week.

Were you always into the scene?
LRM: We were not. Chuy's was our number one restaurant. Chili's, Sonic, somewhere cheap because we couldn't afford anything. Afterwards ... we lived in SA and we started working and having money, and we could spend money on good food. About a year ago, all of our friends started to change. It also helped that there are [more] restaurants out there in San Antonio. I would say two years ago, we didn't have as many restaurants available like The Monterey or Alchemy. There's so many choices available now than there has been in the past. I think that played a huge part. The quality of life wasn't here. We had to go to Austin for that. Now we stay here in San Antonio. We do have choices.

That's pretty spot on and I think helps bring over more people who love food. What can you tell me about the other people in the group?
KO: They're so varied.

The first meetup I attended was on a Sunday morning, how'd that happen?
KO: We couldn't believe so many people actually showed up to that event.

At this point, restaurants are reaching out to you to stop by, I'm sure.

LRM: It was weird at first but exciting in a way.

KO: I knew it was going to happen. Press Coffee took a chance on our group — they didn't charge us for the space — so now restaurants, coffee shops, bars are reaching out. They want exposure, which is what we wanted to do. We want to give exposure to unique places in San Antonio.

KO: I feel like bad service isn't a reflection of the restaurant as a whole. I know people have bad days. I used to work in a restaurant. I know it's hard getting people in the door on time. I feel the same struggle [for them] that I had. People can go somewhere and have the same meal, same service and still not have the same experience.

What have been the best parts about creating the group?
LRM: Getting to know more of the local foodie scene, the restaurants and chefs is probably the best part for me.

KO: I just like everyone in the group. There's 127 people in the email list right now. It amazes me that there are people that want to meet with strangers they met online and have food in common. My mom's motto was the more the merrier. I like that I can do that with people nowadays. I work from home most of the time, so I'm meeting my cats all day. I really like that the SA Foodies allows you to meet with people that you have something in common with already.

What are some tips for people who want to dabble in the food scene?
LRM: Take a chance like we did.

KO: There's so much more than just the Pearl. The Pearl has great food, but there's also Pancake Joe's, Thai Dee, Asian Pho & Cuisine, which has the best wings in town.

LRM: Look at other foodie accounts and see that other people are making friends out there. Deya and Josie met at the Press Coffee meetup and now they're great friends.

KO: All it takes is saying where are the places you've been lately.

What would you say to detractors?
KO: I hear 'it's so expensive' all the time, but the quality of food is so much better. You're going to eat at a restaurant where the chef is getting the money, and they own it and it's not going back to some corporate business. They're making it fresh for you, it's not from a freezer. Or "it takes too long" but everything's fresh and they're making it for you and the chef has years and years of training, and they're curating this menu for you. But if you're looking to try new things, why not try Cured for happy hour or Barbaro on Monday nights when they have their $10 pizza?

What do you look for in a restaurant?
LRM: For me it's how you feel when you walk in, like at Southerleigh by the window. Michin is another where the decor, service and food was amazing, and I had a great experience. The best part was the chairs were really comfortable. My favorites right now are Alchemy, Folc and Feast.

KO: I'm all about the food. I understand places might not have money to put things on the wall, and service isn't great, but sometimes places are known for shitty service.