A savory taste of Malabar 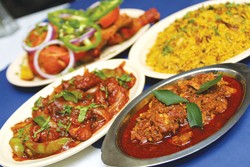 
Ernest Hemingway’s short story “A Clean, Well-Lighted Place” has little to do with lumens and Lysol and all to do with loneliness and lack of sympathy, and yet its title has become a kind of synonym for restaurants low on aspirations but high on wattage. Arriving at night at Taste of Malabar, a relatively new Indian restaurant in a standard strip center on De Zavala, clean and (excessively) well-lighted was our first impression of the place — to the extent that Rome’s Pizza next door looks like a paragon of warm-and-fuzzy welcome.

The aesthetic is an unfortunate framework for a cuisine that’s exuberant and, for the most part, softly spiced. Happily, the food is good enough to create its own world.

Many of the usual suspects, such as samosas and pakoras, are available as appetizers at Malabar. Onion bhaji aren’t that unusual, either, but the slivered-onion and green-pepper croquettes, dipped in rice flour and fried, are especially good with Malabar’s fresh-tasting coconut chutney. More exotic are the urdu dal vada, donut-shaped fritters with a white-bean base that are “a crisp delight loved all over India.” Perhaps if you grew up with them. But we found them relatively bland by themselves, and interesting only as a foundation for the very good tamarind and onion-cilantro chutneys.

Continuing our quest for the exotic, we next were served a dauntingly large (but quick to disappear) masala dosa. Dosa, as fans of Southern Indian cuisine already know, are large, thin, rice-and-bean crepes, and they cry out for well-spiced stuffings. Malabar rose to the opportunity with a winning filling of potato, onions, eggplant, and other vegetables whose most intriguing spice notes were contributed by the curry leaf. (Curry leaves, nutty and citrusy in taste, are native to Southern India, and though they may be used in curries, are not essential to them — and are not the source of the ubiquitous powder.)

Curry leaves play a supporting role in another regional, vegetarian dish, the Kerala mixed vegetable. Kerala is the state that encompasses Malabar, and the dish is deemed “an essential part of the Kerala meal.” It also exhibits another regional characteristic, the widespread use of coconut, both in oil and fresh form. The coconut flavor did come through in a nicely soft-pedaled manner and the flavor was appealing in comfort-food fashion. But we suspect that this dish may have been left over from the lunch-time buffet, as it was a little dry.

Ever in search of savory Shangri-Las, our next adventure was with the appam and curry combo, a reviewer’s dream in that it was composed of both a delicate, spongy, and lacy pancake and a typical fish Kerala masala, or curry — also prepared with coconut. The rice-flour pancakes reminded some of us of Ethiopian injera. One source suggests the rice flour for the appam is fermented with a bit of coconut sap, and though we couldn’t verify this by taste, the result was a pancake that was interesting on its own and even better with the curry — a little fishy for one diner, but just fishy enough to seem real for the rest of us.

Another reviewing twofer came in the form of the idally (or iddli) served with sambar — both regional specialties. Iddli are made from yet another fermented rice and lentil mixture that, in this case, is steamed in a special mold. They are relatively mild in flavor, but the texture is intriguing, and they are also a fine foil for a hearty soup such as the lentil-laced sambar. Typical of the region, the sambar’s spicing isn’t assertive, so
chile-phobes may feel safe and secure.

Lamb, shrimp, and chicken Malabar style remain to be investigated on another voyage, as does the dish called kappa made from “smash tapioca/yucca root.” Yum, yucca; you can bet we’ll be back.

But in an effort to evaluate Malabar’s Northern Indian cuisine, we picked an old standard, the enigmatically named Chicken 65. (65 chilies, 65 days of soaking spices, 65-day-old chicken … nobody knows for sure.) We asked for this spicy and were disappointed that we weren’t deemed worthy. But the flavors, accented by ginger, garlic, chilies, onion, and tomato, were full and rich regardless, making this dish a favorite, especially eaten with a rice fantastically fragrant with cinnamon, cumin, and
cardamom.

Lingering in the light past closing, as Hemingway’s lonely old man would have liked to do, we concluded with desserts of gulab jamun and mango kulti. I have never been a fan of the often-rubbery gulab jamuns made from milk, yogurt, and flour, rolled into balls and deep fried — nor have I much liked the often cloying syrup they’re served in. Live and learn. These were delicate, the syrup was light, and the dish came decorated with shaved coconut. Kulti (or kulfi) is almost always safe, however, and Malabar’s dense, mango rendition of this classic Indian ice cream was devoured in a trice.

If you go to Malabar — and the culinary adventurer should certainly consider making a pass at this coconut coast — do remember one thing: The kitchen will supply atmosphere on the plate, but you are the décor in the dining room. Dress accordingly. •