A scorching odyssey of death and rebirth 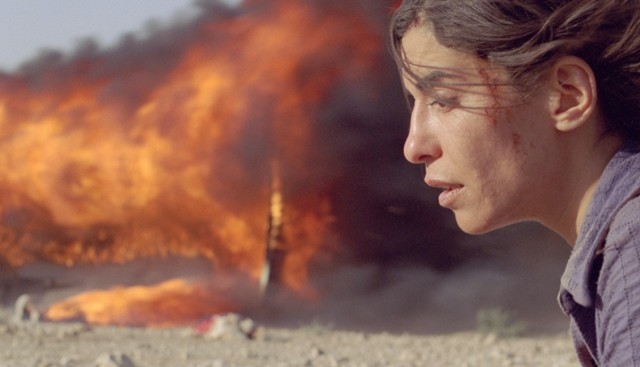 The opening sequence in Incendies is a stunning piece of poetic filmmaking: A desert in the Middle East framed in the window of a barracks where a dozen young Muslim conscripts readied for combat are having their heads shaved. Radiohead’s haunting “You and Whose Army?” quietly plays as the camera zooms in on a child soldier who refuses to blink.

Quick cut to modern day Montreal. A lawyer is reading the last will and testament of Nawal Marwan (Azabal) to her adult children twins Jeanne and Simon.  They learn that their late mother wants them to deliver a letter to their father and their brother. This surprises both since their father has been long dead and they never knew they had another sibling.

Nawal also states that she wants to be buried “naked, face down, away from the world.” No name or epitaph on a gravestone because she did not keep her promises in life.  However, once the letters are delivered, she can rest in peace in the knowledge of what she was never able to tell her children alive.

While this set-up might strike some viewers as shop-worn, it is the stuff that makes Shakespearean drama, grand opera and Greek tragedy lasting forms of storytelling.

Their quest leads them – Jeanne willingly, Simon reluctantly – to a fictional Middle East country (modeled after Lebanon and their long civil war between Muslims and Christians).

The film parallels their search with the mother’s life: as a teen, the Christian-born Nawal has a romance with a young Muslim. Pregnant, she is forced to give up her child as a foundling but not before a midwife tattoos the child’s heel. The child’s mother vows to find him at whatever cost.

Nawal (Azabal’s dramatic portrayal is pitch perfect) is a raging life force whose devastating ordeals and star-crossed fate are constantly shifting as she too learns more about herself. As her story unfolds, I dare you to watch without blinking.

It is said that the cry of the mythical phoenix after having its nest reduced to ashes is that of a beautiful song. Ditto Nawal. When she is incarcerated, the inmates and guards call her “The Woman Who Sings.”

Incendies retells that age-old song of songs with beauty and grace.