Little about the pandemic has been good for the music industry. That said, some artists have used the downtime to record songs or even album-length projects that provide windows into their creative souls that wouldn’t exist save for the downtime.

San Antonio’s own Nina Diaz, frontwoman for alt-rockers Girl in a Coma and a solo artist in her own right, is a perfect example. Since October, she’s released five EPs composed of cover songs performed acoustically, the most recent being 3 Songs, released earlier this month. The vibe of the collections is so DIY that a number of the tracks close with the sound of someone clicking the “stop” button.

Despite the recordings’ rough-hewn nature, GIAC fans may want to invest some listening time in Diaz’s solo material. She lists herself as the “former” frontwoman of GIAC, so perish thoughts that their recent private reunion show portends any deeper meaning. Still, her acoustic project further expands her musical palette, marking a major departure from her beat-heavy solo debut.
Diaz has released covers before via GIAC’s Adventures in Coverland. Her unique phrasing and vocalizations were the defining feature on that project as well, so long-time listeners will know what to expect from her current project, sans backing band.

“I began these covers when lockdown hit to help me make ends meet,” she explained with characteristic honesty when putting them up on Bandcamp. Services such as Spotify that tend to rob smaller artists blind aren’t getting this project.

Diaz and her former bandmates — sister Phanie Diaz and Jenn Alva, who also make up the rhythm section for riot grrrl revivalists Fea — have a sound rooted in their formative years, the ’90s. Fea showcased this side earlier in the pandemic with a Bikini Kill-themed livestream.

Diaz mines the same vein on her acoustic series, which draws heavily on artists that defined the Lollapalooza era — PJ Harvey, Chris Cornell, Hole and Smashing Pumpkins among them — or artists that provided roots for the ’90s sound, say Led Zeppelin and David Bowie. However, it’s clear she isn’t limited to one decade or style. She pays tribute to a significant number of Americana artists as well.

Some of the material has taken on new meaning in the context of last week’s weather-related meltdown. Diaz’s pensive take on Simon and Garfunkel’s “The Sound of Silence” from VOL 1. (Halloween) seems recorded for just such a snowy landscape.

Diaz sounds a little hoarse and strained on her version of Bowie’s “Heroes.” Those vocals may not have survived a studio spit-shine process, but they’re perfect for the vibe here, steeped in authenticity and genuine emotion. 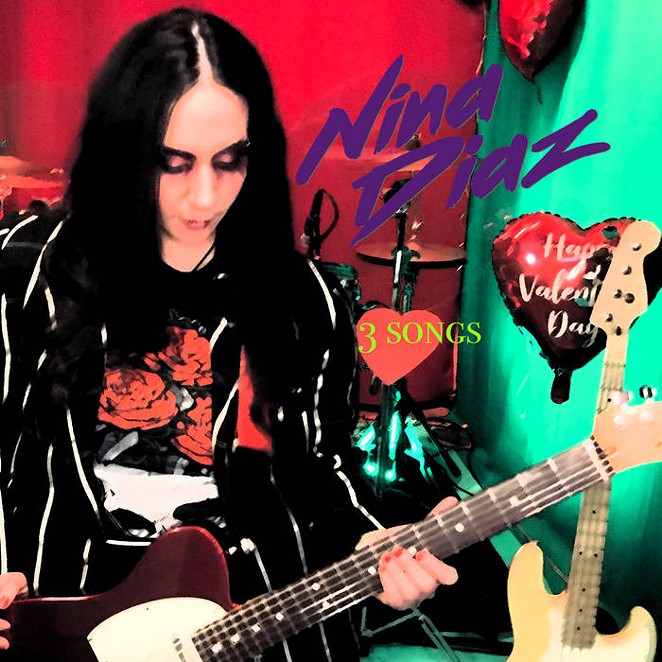 Of the releases, Vol. 2 Country Vibes showcases her folksiest side, highlighted by a surprising, rootsy twist on British singer-songwriter Kirsty MacColl’s “They Don’t Know.” Another standout is a stripped-down take on pop-country megastar Shania Twain’s “You’re Still the One,” showing that the song is strong at heart and not just a Mutt Lange production achievement. Those hoping for a version of Twain’s Def Leppard-tinged material apparently will need to wait for future volumes.

Diaz continues to show her range on best-of-the bunch Vol. 2, notably via her soulful take on The Motels’ ‘80s classic “Only the Lonely” and her sultry, smoky spin on Roy Orbison’s “Blue Bayou.”

Arguably the best song of the entire project, though, is Diaz’s version of Mazzy Star’s “Fade Into You.” While an obvious choice given the singer’s debt to the ’90s, it’s a reminder that “expected” doesn’t necessarily mean “bad.” Diaz predictably owns the material, putting her own stamp on the vocals.

The Songs for Your Valentine EP includes an artist you knew was coming. Morrissey is a huge influence for GIAC — hence their name that pays obvious homage to the Smiths’ “Girlfriend in a Coma” — and he’s finally represented here with “The More You Ignore Me, The Closer I Get.” Perhaps Diaz isn’t as mad at the Moz as everyone else in Alamo Town for his 50 or so concert cancellations.

Her treatment of Zep’s “D’yer Maker” provides another powerful highlight, as does her take on New Order’s “Love Will Tear Us Apart,” which works even stripped of Peter Hook’s classic, majestic bass line.

These are tough times for musicians, so toss Diaz a few bucks on Bandcamp, you cheap bastards. It’s easy to picture her hanging out in the park strumming these songs. This is, after all, digital busking. And you can enjoy it from your own home, safe from freezing weather, COVID-19 or whatever other disasters 2021 has in store.