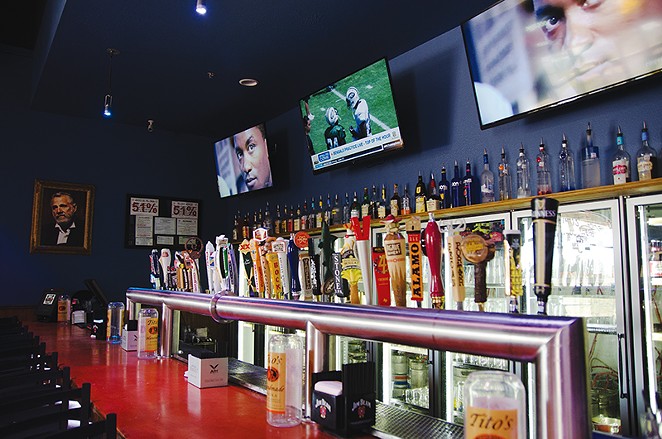 Sunday Funday. Whether you’ve been going hard since Friday night and need to keep the party going to avoid the collective hangover, or you’re looking for a way to forget that Monday and all its nonsense lurks right around the corner, finding the right place to score a hangover cure is tough. Once these spots are found, it’s even harder to keep others from ruining it. So, bored by the usual locales, I ventured way past my comfort zone to find a new beer-filled haven for Domingos Divertidos.

Just past its two-month mark, Brews Brothers is north of Culebra on 1604 off Leslie Road. Don’t mind the construction, though you may want to plan for the slow crawl of traffic lined with giant trucks and minivans. Keep your eye out for the spot, because if you miss it you’ll have to go around 1604 and Culebra, like I did. But once you make it there, Brews Bros has plenty of potential to work with.

Owned by the same folks who brought you The Leaky Barrel, Helix Bar and Beer Goggles Bar, Brews Brothers doesn’t break the mold when it comes to bar design — that’s just fine. The main hall is filled with tall bar tables, beer neons litter the walls and the garage doors signaled there was more coming in the way of a patio, which remained closed off and devoid of furniture during our visit.

We settled on the sangria carafe ($10) and we joined tables with pals who also happened to be in the area for Sunday Funday. It doesn’t take much convincing to try a new bar, but the free barbacoa likely helped. Served with both flour and corn tortillas and diced cilantro and onions, the barbacoa was an excellent start to our mid-day drinking. Sangria fans should note that this version was on the sweeter side, but fresh lemon and orange slices helped cut that sweetness. Our group also tried the bottomless mimosas (also $10) and made a day of it while discussing great tacos of San Antonio, Carnival cruise stories and the level of anxiety that goes along with filling in one’s eyebrows.

Bar patrons ranged from families to couples to groups of chill bros, all digging into the barbacoa or ordering bites from nearby restaurants. This will likely change in the coming weeks as Brews Bros opens its kitchen, hoping to crank out “pub grub” including burgers, appetizers and salads. I can’t knock the internet jukebox and its wildly varied selection, but I will knock the volume of its speakers. It bordered on early Saturday night, or maybe I’m just getting old and need a ultra chill Sunday Funday and for those kids to get off my lawn …

This being an icehouse and all, the brew selection is formidable. You’ll find 40 beers on tap and 59 bottles from which to choose, with big names and local wares making the board. Those looking to avoid traffic during rush hour can find an oasis during Brews Brothers’ happy hour from 2 to 8 p.m. daily, when Tecate & Tecate Light are $2, domestic bottles and pints max out at $2.50, wells are $2.75 and infused shots are $3.

As one of the few locally-owned joints in the area, the bar’s already become a hot spot for locals wanting to try something new within familiar confines or without having to trek inside either loop. And come UFC 191, when Flyweight champ Demetrius “Mighty Mouse” Johnson and John “The Magician” Dodson duke it out for five rounds — well, hopefully — bar-goers will want to grab a seat at Brews Brothers early. The bar was at capacity during Ronda Rousey’s 34-second takedown of Bethe Correia.

The beer is cold, the drinks are sweet and the jams are loud, but Brews Brothers has plenty in the works — upcoming kitchen and new patio — to keep locals interested. And the bar serves as a great starting point for Sunday Funday as those bottomless carafes hit you mildly enough to keep the festivities going through day’s end.