'A Very Murray Christmas' Is a Comedic Gift 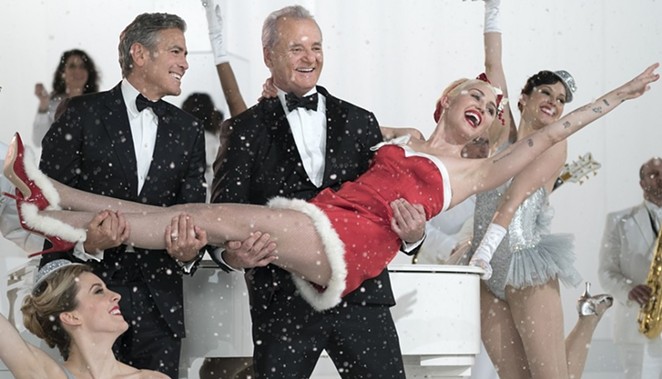 As actor Bill Murray continues his ascension from beloved actor to national treasure, he has proven his tremendous staying power. It could be his omnipresence in the films of Wes Anderson or just the fact that he's a weird dude, but Murray has become a favorite of the younger generation.

Of course, much of that can be attributed to his eccentric personality. He famously doesn't have an agent and those who want to get a hold of him must call a 1-800 number and leave a message. He has also been known to crash bachelor parties, karaoke get-togethers and kickball games. With Murray, it's quite simple: the weirder, the better. This mystique and folk-hero quality is probably why nobody will think twice about watching his Christmas variety special premiering on Netflix called A Very Murray Christmas.

The premise is basic: It's Christmas Eve and there's a monumental snowstorm rolling over New York City. Murray is supposed to be putting on a celebrity-packed live Christmas TV special, but has one major problem — nobody can get in or out of the city. The special opens on a sad looking Murray, wearing reindeer ears, with his tuxedo tie untied, longingly gazing out a window and crooning the words to "Christmas Blues." Accompanied by former Late Show with David Letterman bandleader Paul Shaffer on piano, it's a perfect introduction to the sad sack version of Murray that we've come to know and love. As he is pep talked by his producers, played by Amy Poehler and Julie White, an expressionless Murray proclaims "God hates me" as he is forced to perform with no audience and no celebrity guests.

As he attempts the show, problems are instantly felt and Murray and company linger trapped inside the Carlyle Hotel with no one to entertain and nowhere to go. As Murray navigates the hotel bar, he runs into a group of hotel workers and guests, including the band Phoenix, Rashida Jones, Jason Schwartzman and Jenny Lewis. It's a little odd having celebrities play actual characters in a world where celebrities exist (and Murray/Schwartzman have worked together several times), but it works nonetheless. Every interaction morphs into the performance of a classic Christmas tune, some that are less popular and the occasional random one.

When it comes to the music, A Very Murray Christmas is equally balanced between performances meant for humor and those with slightly more sincerity. Something like Miley Cyrus belting out "Silent Night" is a clear vocal shining light, while Murray performing "Do You Hear What I Hear?" wearing matching turtlenecks with a reluctant and petrified Chris Rock is pure comedy. But more often than not, these styles are blended making for some sweet, funny moments, including a fantastic duet of "Baby, It's Cold Outside" with Lewis. She crushes it vocally, while Murray answers back with well-delivered lines like "you couldn't get a cab if your life depended on it."

As the clock strikes midnight, Murray has a mishap and enters a dreamscape, where he's met by Cyrus and George Clooney, himself, arriving by sleigh. This is where the party really kicks off as Cyrus and Murray perform a duet while Clooney does the most Clooney thing ever and flirts with beautiful women while making martinis at the piano with Shaffer. It's also where the highlight of the show comes in, which is a funky rendition of "Santa Claus Wants Some Lovin'" with Murray and a totally game Clooney providing backing vocals that connect for a huge laugh every single time. Not only is the song catchy but it probably should replace "Jingle Bells" as the gold standard of Christmas songs.

Those searching for a comedy special may find themselves confused once they get past the initial moments and the songs keep on rolling. While the narrative plotlines are a bit tossed aside, the musical numbers are mostly fantastic and the entire thing feels warm, friendly and supremely charming. It may not be as offbeat as it could be (it's certainly the most accessible pairing of Murray with co-writer and director Sofia Coppola) but A Very Murray Christmas is a fun and inviting throwback to pure variety show entertainment and it's truly special. For Netflix, it's an interesting move to release this special in early December, rather than leaving a nice present for Christmas morning. Though with great musical performances of classic Christmas tunes, a legitimately funny script, and best of all, Bill freaking Murray, it's easy to see how A Very Murray Christmas could, and should, become the next time honored Holiday tradition.