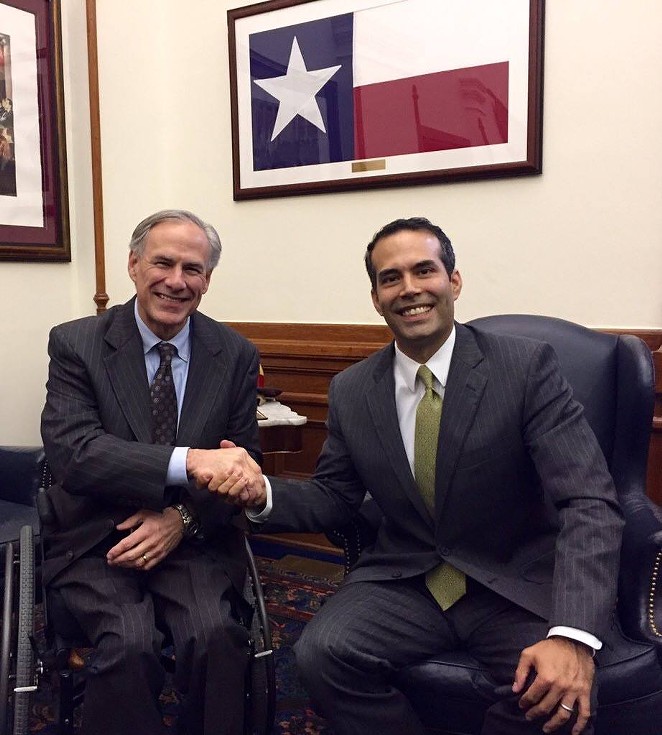 One of the Texas GOP's rising stars — a Bush, no less — is taking heat for settling a battle over thousands of Alamo artifacts with the Daughters of the Republic of Texas.

Last Friday, the Associated Press reported that the Texas General Land Office resolved a lawsuit with the Daughters of the Republic over a vast collection of history: approximately 38,000 books and relics. GLO also agreed to pay $200,000 in attorneys fees to the Daughters as part of the settlement.

GLO Commissioner George P. Bush, who has been heralded as a promising politician since winning elected office in November 2014, fired the Daughters of the Republic of Texas, who managed the shrine for 110 years, as custodians of the Alamo a few months after he took office in 2015. Days later, the Daughters sued the GLO.

An internal memo obtained by the Houston Chronicle this week shows that Governor Greg Abbott's chief of staff Daniel Hodge is not happy with the settlement reached by Bush's office, calling it "regrettable" and "avoidable."

"Had the General Land Office more vigorously defended the State's interests in this matter, the agency would not have found itself in a position in which the (Daughters of the Republic of Texas) can demand this settlement," Hodge wrote in the memo obtained by the Chronicle.

Hodge goes on to say that the only reason Abbott approved the settlement was out of deference for the "independent constitutional officeholder requesting it."

Since Bush took office, he has been embroiled in all things Alamo. The City of San Antonio and the GLO have teamed up to come up with a new master plan for the historic site that could change the landscape surrounding Alamo. The GLO and the city left the Daughters of the Republic of Texas out of the advisory board coming up with the plan.

However, Bush's problems have extended beyond his battle for the Alamo. In August 2015, the Texas Tribune obtained video where Bush said the GLO faced internal threats, which followed Bush's termination of several high-ranking staffers. By September, Bush fired nearly 20 employees. That same month, the Houston Chronicle found that Bush hired 29 people who either worked on his campaign or had political connections to him without publicly posting the positions. The newspaper also reported that those hiring decisions may conflict with state law that requires open positions to be posted on the Texas Workforce Commission's website.

As for the settlement, when it was announced, Bush said everyone was pleased with the outcome — which, judging by emails coming out of the governor's office, clearly isn't true.