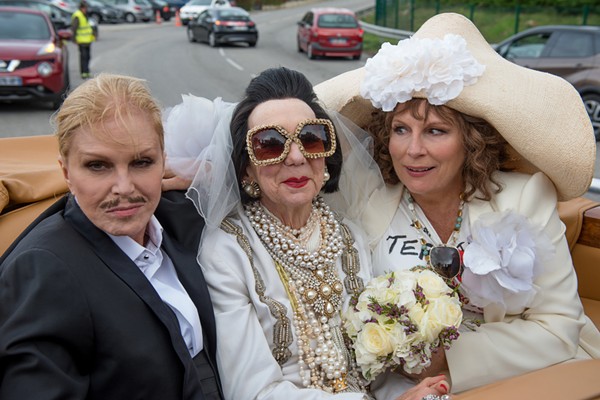 Thanks to syndication on Comedy Central in the mid-’90s, Absolutely Fabulous developed nearly as much of a fan base on this side of the pond as in its home in the U.K. The series follows the misadventures of the boozy, druggy, self-centered Edina (Jennifer Saunders) and Patsy (Joanna Lumley), two women working in the world of public relations and fashion. As reprehensible as the characters can be, AbFab turned into one of the most beloved touchstones of British comedy in the ’90s, returning for revival seasons periodically throughout the 2000s. A well-received 20th-anniversary season in 2012, coinciding with the London Olympics, set the ball rolling for a feature film. And now that it’s here, it doesn’t disappoint fans of the show.

Edina and Patsy haven’t matured over the past 24 years — nor should they have, as that’s a large part of their charm. The pair are unconcerned with anything past the next drink, the next client, the next opportunity to get one over on a rival. It’s only when Edina’s finances are left in tatters after years of poor decisions and her involvement in Kate Moss’ accidental death that the pair are forced to examine their lives. However, that soul-searching only leads them to hatch a plot to find a sugar daddy so that they can live “the good life” without having to put any more time into such boring pursuits as work.

The resulting expedition to the south of France has a Dirty Rotten Scoundrels feel to it, and is one of the stronger segments of a film that often feels comprised of a series of sketches of varying quality. But during the trip to Cannes, we get to see screenwriter Saunders skewer the disparity between how men and women are expected to age, a gender-bending turn from Patsy that’s almost disturbingly evocative of David Bowie, and a climactic chase scene that somehow ends up with Edina delivering a monologue on aging that gets her as close to sympathetic as we’re ever likely to see her.

All in all, it’s an extremely satisfying movie for fans of the original television show. Saunders and Lumley toss off absurd gags and biting one-liners as casually as if they were last year’s Gucci gladiator sandals. Celebrity guests abound, with particularly strong turns from Jon Hamm (Mad Men) and Chris Colfer (Glee). However, if you’re not the type of fashionista who knows the names and faces of the hottest designers and models, be prepared to use context clues to figure out who some of the guest stars are and resign yourself to missing out on some gags entirely. And if you’re unfamiliar with AbFab in the first place, this may not be the best way to get introduced to them. The supporting cast, including Edina’s mad genius personal assistant, Bubble (Jane Horrocks), and stick-in-the-mud daughter, Saffy (Julia Sawalha), return, but without prior knowledge of their relationships with the principals, you may find yourself wondering just what exactly is happening on screen. And the numerous callbacks to episodes of the series can leave all but the most encyclopedic fan in the dark.

We have no doubt that Edina and Patsy will stumble their way back into our lives at some point in the future, though nothing has been announced yet. Early reviews of Absolutely Fabulous: The Movie have been deservingly positive, and it should clean up nicely at the post-Brexit summer box office in the U.K. But for now, seeing the girls float off into the sunset with drinks in hand and lessons unlearned is just as it should be: absolutely fabulous.