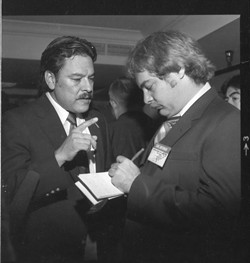 What a coup for the University of Texas at San Antonio, which has been pushing hard to reach top-tier research status to stand beside top players such as UT up the road in Austin.

San Antonio was picked to house the archives of longtime Latino civil rights activist and leader Willie Velásquez, who grew up in San Antonio and is best known for his years-long push to turn Latinos into registered voters.

The main legacy institutions associated with Velásquez, the Southwest Voter Registration and Voter Education Project and the William C. Velásquez Institute, announced that the organization's archives will be housed at UTSA's John Peace Library.

A formal signing ceremony will be take place tonight at 6 p.m. at the Wyndham Garden River Walk Museum Reach hotel.

"This collection will make UTSA the envy of all universities,"said Sharon Navarro, who teaches political science.

"Social scientists and legal scholars will come from every region of the country to conduct research here," Navarro added. "This unique collection designates UTSA as the premier institution for the collection of Latino civil rights, political empowerment, voting rights and redistricting. This collection serves as a historical foundation for the community to share with future generations."

Antonio González, current SVREP President, said the materials will provide different sides to its iconic founder that most people will have probably never seen before.

"The documents will provide a peek into the foresight of Willie as he planned and strategized on a future ripe with possibilities for Latinos," he said.

According to UTSA, the collection will include SVREP's first 20 years, starting when Velásquez founded it in 1974. Documents include redistricting maps, voter exit surveys, campaign papers and newsletters.

The institute is a non-profit public policy think tank founded in 1985 with the goal of producing research to boost political involvement and mobilization of Latinos.

Velásquez, who died in 1988 from kidney cancer, was awarded the Presidential Medal of Freedom in 1995 from former President Bill Clinton. In 2013, the Texas legislature named May 9 (tomorrow) as Willie Velásquez Day.

The activist's roots run deep in San Antonio. He was born in Florida, but was raised here, graduating from Central Catholic High and later obtaining his bachelor's in economics from St. Mary's University. Then he took to field activism, in San Antonio and South Texas, linking with organizations such as César Chávez's United Farm Workers.