Greetings from Austin City Limits 2011. I'm currently eating a donut at Hotel Wardlaw and still feeling groggy (hey, Zilker Park allergies, I've missed you), but that won't stop me from recapping the two shows I got to check out at ACL Day One. Two shows might not seem like a lot, but one of those shows was probably the biggest spectacle Zilker Park has ever seen. And it wasn't Santigold.

First, I have to apologize for missing James Blake, Cults, Wild Beasts, Kurt Vile, and Big Boi (who played way, way too early at 4:30). The first act I wandered over to was Bright Eyes, aka Conor Oberst, who was mid-show. I have a complicated relationship with Oberst's music (read: I'm not really into it) but the man was rocking out admirably. His older songs benefitted from his advanced age, and his new songs from The People's Key sounded pretty good.

But the first show I could check out proper was Santi White, aka Santigold. She's been out of the spotlight for awhile, and it was nice to see her again. And she wasn't alone — she brought back-up dancers and a crew of costumed musicians. She opened up with a new, African-tinged song (from her forthcoming LP) before settling into "L.E.S. Artists" and "Lights Out," hits from her self-titled 2008 album. I had forgotten what a good pop songwriter White is, so it was a pleasant reminder. Looking forward to her next album. 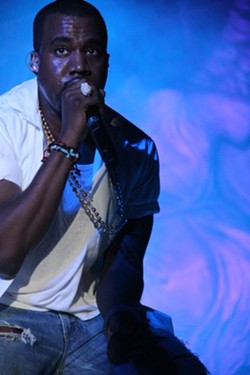 Whatever your feeling about Mr. West, it's impossible to dispute the fact that he tries his hardest to put on the biggest and best show possible. Sometimes he goes to the extreme, starting shows late when he feels like the details aren't just right (like his infamous Bonnaroo 2008 set). But his ACL set — capping his Twisted Dark Fantasy tour — benefited from time on the road and the show went off without a hitch.

We knew something big was going down with the entire stage dressed in white, a huge pseudo-Roman backdrop looming above minimal stage instruments (keyboards, DJ). The backdrop darkened, dramatically revealing the words "ACT ONE." Then the show began, a disembodied choir built in intensity until 20+ ballet dancers, dressed like the performer from the "Runaway" video, burst onto the stage and interpretive-danced their hearts out. If that wasn't epic enough, Kanye began his first song not from the stage, but from a cherry-picker in the middle of the crowd. Then he jumped onstage to lead the dancers in a badass rendition of "Power," followed by "Jesus Walks."

Despite his mic cutting out briefly in the beginning and some overall hoarseness, Kanye was in top form — older hits like "Good Life, "All Falls Down," and "Golddigger" sounded just as fresh as his Twisted Fantasy stuff, and even the auto-tuned, downtempo cuts from 808s and Heartbreak turned out to be total bangers.

"ACT THREE" was devoted to an epic staging of West's magnum opus, "Runaway," extended to include KANYE crooning the refrain "If you love someone tonight / Hold on so tight" before resuming his toast to the douchebags. West was in a sentimental mood, thanking his entire crew and praising his dancers.

Finally he dedicated the show to his late mother, Donda West, with a brief, oddly moving rendition of "Hey Mama." Some people in the crowd grumbled about West ending the show without a big, explosive hip-hop anthem, but when West, his band, and his dancers joined hands for a long, graceful bow, there was no doubt: Kanye pulled off one of the best ACL sets, ever. Your move, Arcade Fire.